Tom and I had to leave Ulan Bator almost as soon as we arrived. We both needed to find apartments in Paris and Barcelona respectively and we needed to do it ASAP because classes started on Monday.

Our journey back to Europe was destined to be as complicated as our journey to Ulan Bator, but we spent the evening at least reveling in our victory by gorging on North Korean food, which tasted exactly like South Korean food, and seeing the few sights Ulan Bator had to offer. We met some fellow Mongol Ralliers at about 1 a.m. who were taking the same flight as us and stayed up all night with them swapping stories from the journey and choking down the Cuban cigar that Stephan had brought for just this moment. Though we had spent 6 weeks traveling through countries where people inhale smoke as often as oxygen, none of us had a knack for it. With one final freezing cold shower and donning our MMT t-shirts proudly, we shouldered our bags and hugged each other farewell. Our team was officially splitting up.

We arrived to an airport that was pure chaos. The lines were an illusion of order since everyone practically ignored them. I was waiting in line at the ticket booth with one girl in front of me when suddenly her entire family cut me in line. Not just mom and dad, but her entire extended family including grandpa, grandma, what looked like an uncle and aunt, and about 6 siblings. No one in the long line behind me seemed outraged or even surprised. To make matters worse, the lines kept switching destinations. We were waiting in the line destined for Moscow, when suddenly, without moving, we were in a line destined for Beijing. Tom and I kept running back and forth between lines trying to make sure we were headed to the right country.

After rushing to go through customs, since the confusion at the ticket line made us late, we looked at our tickets to find our departure gate only to find it blank. Frustrated, we simply found a group of Mongol Ralliers heading to Europe and hunkered down next to them. We soon discovered why there was no gate number on our ticket—it was entirely unnecessary to put one there. The airport only one runway and one gate through which all international traffic flowed into and out of all of Mongolia. An incoming flight to Hong Kong taxied in, quickly unloaded its passengers, loaded outgoing passengers and took off. Then suddenly the gate destination changed to Moscow. Even though we were in the only airport in the capitol of Mongolia, it more closely resembled a greyhound station in a tiny town in the U.S. We boarded the plane and before all of our luggage was stowed or a safety demonstration took place, we took off. However, this was only the beginning of a two-day adventure.

You may remember that Tom and I left our luggage for our extended stay in Europe in a tiny town in the Czech Republic called Vranovice- well now we had to go pick it up. Our plan was to fly from Moscow to Prague, take the metro into the city, find the bus station and take a bus from Prague to Brno where Tom’s friend from high school, Vojta Helikar, would hopefully be waiting for us luggage in tow.

Of course nothing went as planned. Our flight from Moscow to Prague was two hours late. When we landed neither of our iPhones were functioning because we did not have a chance to charge them before leaving Mongolia. This wouldn’t have been a problem except that Tom’s friend would be waiting for us at the bus terminal in Brno in half an hour and we were still in the airport over 4 hours away. We decided to try to charge our phones in order to Skype Vojta and let him know we were running late. No longer ashamed to ask for assistance, Tom asked a pretty girl, “Mind if I charge my phone with your computer?” She kindly obliged and we sat there drinking tea and awkwardly staring at his iPhone waiting for it to turn back on.

We were able to contact Vojta and buy ourselves a few hours. There was a bus leaving from Prague to Brno at 10 P.M. We assured him we would be on that bus. I once again mentally prepared myself to navigate an unknown city this time by metro. Tom and I were trudging through the airport toward the metro with tickets in hand tiredly hunched over with the weight of our luggage when suddenly he interrupted my thoughts: “let’s just take a cab.” “Thank god,” I replied relieved, “I didn’t want to be the one to suggest it!” For the first time on Mongol Rally, and on the last leg of our journey, we decided to take the easier road.

We cabbed from the airport to the Prague bus station. I sat on the floor of the station guarding our bags while Tom went to the ticket booth to purchase our seats to Brno. I was not close enough to hear what was being said, but I saw Tom’s face fall. “This is not good,” I thought. He slowly walked back to me and explained that the last bus to Brno was completely full. We could not get on that bus and there were no others leaving from that company tonight. I didn’t have time to react before the guy at the ticket booth called Tom over and chatted with him some more. Tom rushed over to another booth in the station. This time he returned with two tickets. There was another bus company that had two seats left leaving at 11 P.M. We would make it to Brno after all, though once again we would be late. Our spirits lifted, Tom and I decided to celebrate by eating some cheeseburgers while we waited for the bus.

This time Tom watched our bags while I went to get our meal. I heard two girls behind me at the Burger King chatting in English. I had not heard English from a stranger in so long, I decided to turn around and introduce myself to them. They were just as friendly, introducing themselves as Nicole Phelan and Diana Rothery from Washington. Inevitably, most likely because of my bedraggled state, Mongol Rally came up. Diana said she was friends with some crazy people who she thought where doing the same thing…or at least it sounded the same. She wasn’t sure she said, but she thought their team was called “Guitar Hero” or something like that. It took a moment for that to register—“Bataar Hero?!” I yelped, “We know them! We traveled with them!” This of course led to some story swapping over cheeseburgers. We were able to fill them in about the fate of their friends thousands of miles away and out of contact with the world. Team Bataar Hero, still in Mongolia, had managed to enter our journey one last time.

When 11 P.M. rolled around, we said goodbye to our new friends and boarded the bus. I passed out as soon as I sat down and woke up 3 hours later in Brno. We exited the bus in a hurry only to find a completely empty parking lot. Vojta had obviously gone home since it was now 2 A.M. and we were almost two hours late. Once again we were stuck and had no way to contact Vojta. Tom fished out some crowns he had stashed away from our 2-hour stint in Prague on Mongol Rally and tried one of the pay phones without luck. Spotting a surly looking bathroom guard fiddling around on his cell phone, I boldly approached him and gestured a request to use his phone offering a hand full of change in return. He gruffly pointed at the pay phones. I tried to gesture that they didn’t work, offered the change again and put on the most appealing and pitiful look I could muster, which at this point wasn’t too difficult. Finally he handed me his phone with a resigned look. Tom quickly dialed the number and was successful this time. I handed the phone back repeating “dekuji” several times and offered the guard the change. He nodded acceptance for the thanks, but refused the change and went back to fiddling around on his phone again.

In a few minutes a car pulled up and Vojta stepped out. Tom greeted him warmly and he quickly loaded our luggage and drove us to his house. At Vojta’s house, not only did we find our luggage safely stashed away, but a hot homemade meal prepared by Vojta ‘s wife Helena waiting for us on their kitchen table. Even though it was 2 A.M., I was a stranger, and we had kept them waiting for hours, they greeted us with the hospitality and warmth of family members. We shared a meal and drank copious amounts of wine from their family’s own vineyard. We shared our adventures during Mongol Rally with them and they told us about their extensive travels through India and Nepal from which they had just returned the night before. We stayed up talking and drinking until 4 A.M. when they led us to freshly made up beds they had prepared for us in their den.

We slept for only three hours, but even that was too long. We had to catch a bus back to Prague and we were late! We jumped out of bed and loaded the car in record time even by Mongol Rally standards. Vojta and Helena quickly drove us to the bus station where we said hasty but heartfelt farewells and barely caught the bus in time. Tom and I where tired, but we were truly touched by Vojta and Helena’s hospitality. We spent the entire three hours to Prague chatting about the meal we had enjoyed the night before and all the things we would enjoy once we got to our new homes. “Steak!” said Tom. “Fresh fruit!” I said, “and I never want to see white bread ever again.” We both agreed that daily showers and a bed would be a huge benefit.

We arrived in Prague at 9 A.M. Tom and I now worked like a well-oiled unit: we quickly unload our bags, took our luggage to a corner, and I waited guarding our piles of luggage while Tom searched for some breakfast. Fully expecting him to return with bread in some form, I was shocked and overjoyed when he pulled out a cup filled with fruit salad for me. Tom watched me with amusement as I savored my fruit salad almost tearing up when I got to the pieces of kiwi. Soon it was time for Tom to board his fight to Paris. I waited with him in the line to security, reluctant to let my last MMT teammate go, but finally we had to say our farewells. We hugged and promised to visit each other. The team had officially dissolved. We were all on our own now. A few hours later I boarded my flight to Barcelona. Mongol Rally was officially over, but my next adventure was about to begin… 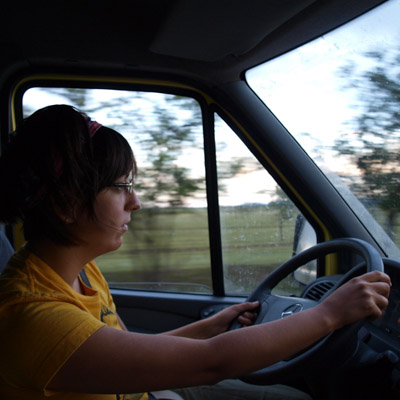