by Stephen Jan in Gorele, Turkey

We left Istanbul after two restful days in the city. We were sad to bid farewell to Cat, John, and the sarcastic hostel guy who tried his hardest to convince us that the police was after our ambulance, but we had to push on toward Georgia. We departed after one last dinner in Istanbul and drove for a couple hours, and spent an uneventful night parked at a gas station.

The following day, we were determined to cover as much ground as we could. We headed east toward Ankara, then swung north toward Samsun. There, we made a brief stop to pick up provisions and to fix a car door that up until now had been sealed shut with duck tape. Tom, armed with his phrase book and hand waving communicated with the mechanic. Lillie, armed with her shrill voice and pounding fists, negotiated the price down to 10 euros.

Highways in turkey were in pretty good condition - double lanes, good lighting, plenty of gas stations. We made great progress and were pretty close to Trabazon when it was time to find a place to stop at around 2am. Hoping to avoid waking up to the smell of petrol and the rumbling of engines, I sought out a spot overlooking the Black Sea. We found a parking lot belonging to an outdoor food stand overlooking a rocky black sea coast.

Determined to end the night with a couple beers, Tom and I pulled out 2 cans of Efes’ while the rest of the team slept in the ambulance. Moments later, we noticed a shadow emerging from trailer. Not sure what to do, we did the most sensible thing and the most powerful move in international diplomacy: we offered the man a beer. It turned out that the man was the owner of the food stop. We wound up spending the next two hours lounging at his cafe space drinking beer on plastic chairs staring out into the pitch black Black Sea eating some sort of strange spicy Turkish lettuce wrap he pulled put of his fridge which Tom apparently really enjoyed. 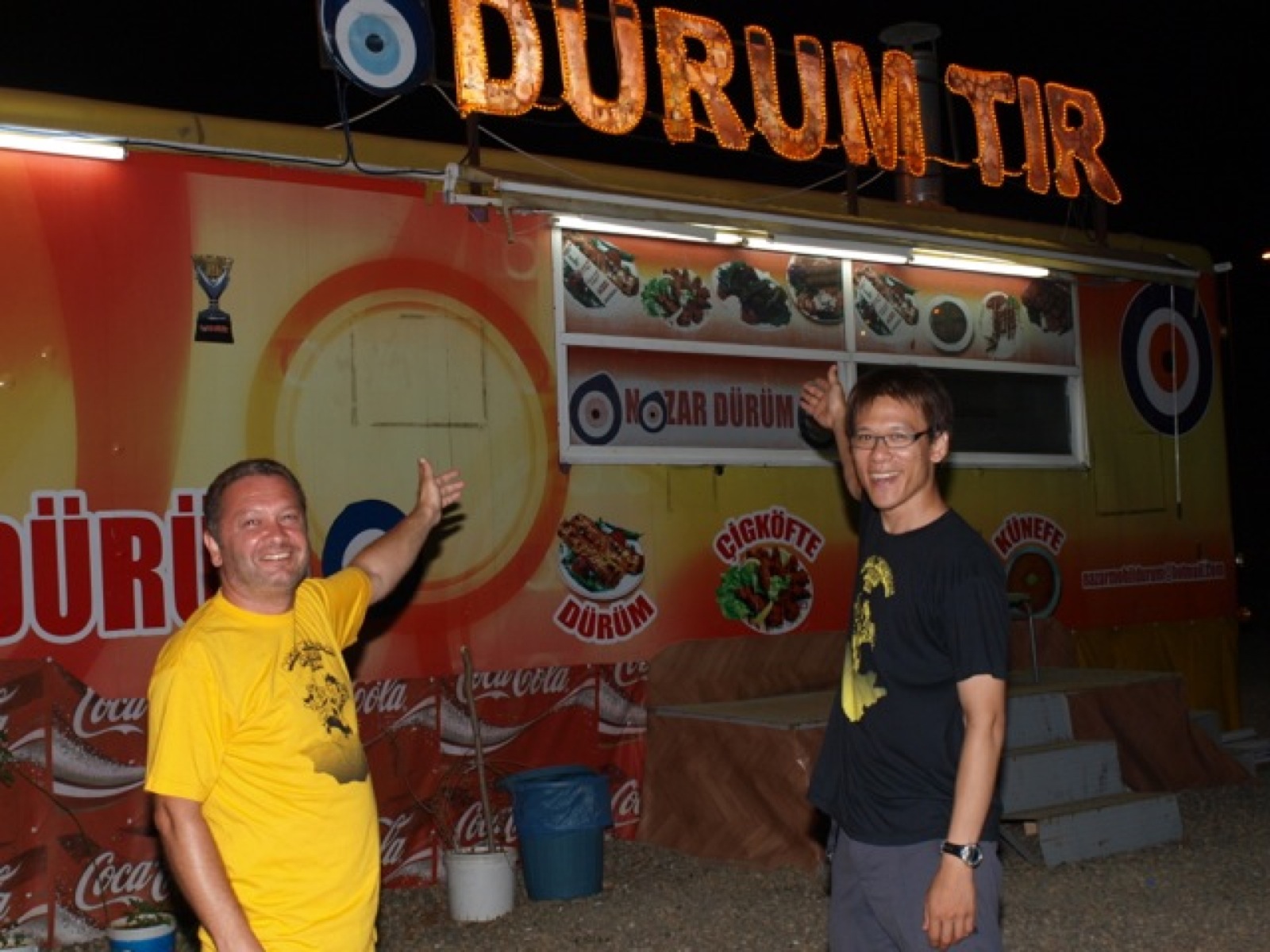 Morning came around and we woke up to the magnificent sight of the Black Sea. Lillie started prepping an oatmeal breakfast while Tom dropped down and did pushups. I wandered across the street to see if i could find a market.

I wandered around for a bit, market wasn’t open yet. The only thing I could find was a corner cafe called “Foka Cafe”. Noticing a trickle of activity, I strolled in and asked the man wearing the red apron for tea. When I stood up to leave and pay for the tea and chorba, the man put his hand over his chest and refused my money with a smile. I can’t speak Turkish, i did the best i could to thanking him with a firm hand shake and big smile.

I returned to find my team enjoying oatmeal. Before setting out, Judy complained that I got Turkish tea while all she drank was a cup of two day old flat fanta. Tom insisted that we find a usable toilet for him. Apparently he had been holding it in for three days waiting for a restroom with a real “throne” that didn’t require squatting over a shrine of urine, feces and crawling critters.

I returned to foka with the rest of my team. The man was delighted to see us and served us tea while Tom ran for the toilet. But again when we got up to leave, he would not take our money. I decided to reciprocate the hospitality by offering him a yellow team mmt tshirt. He looked positively moved and gracious. We were about to take off when he insisted that we come with him. Curious to see where he was about to take us, we followed him down the road. 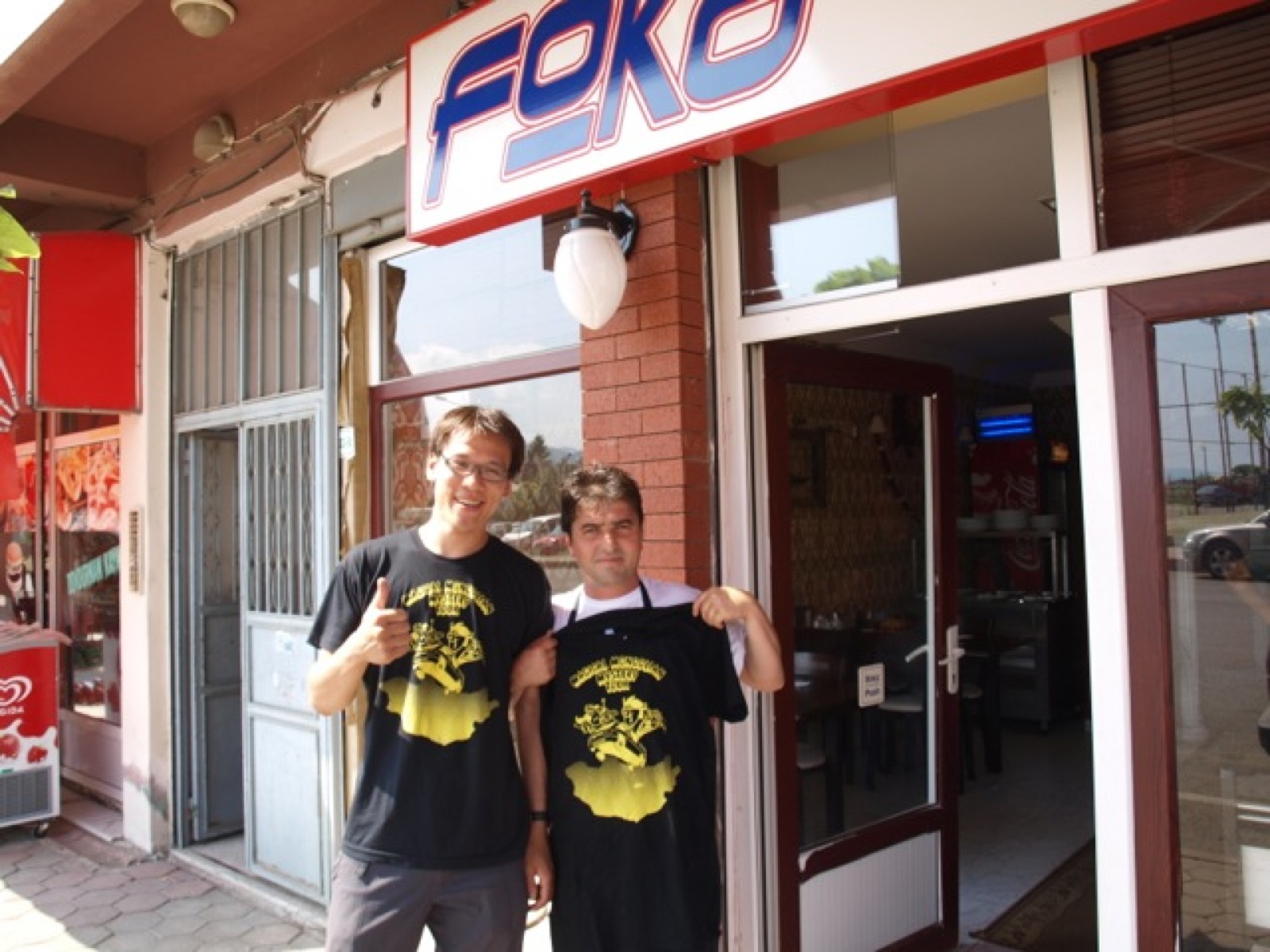 Gul brought us to an outdoor cafe and we joined him for Turkish tea. With toms phrase book we managed to communicate who we were and what we were doing, to which he responded “crazy”. Later into the conversation he waved his arms signifying “swimming”, and scribbled a little picture in Toms phrasebook indicating “sailing”. He was offering to take us on a boat to go swimming in the black sea! We weren’t going to make much progress toward georgia today. 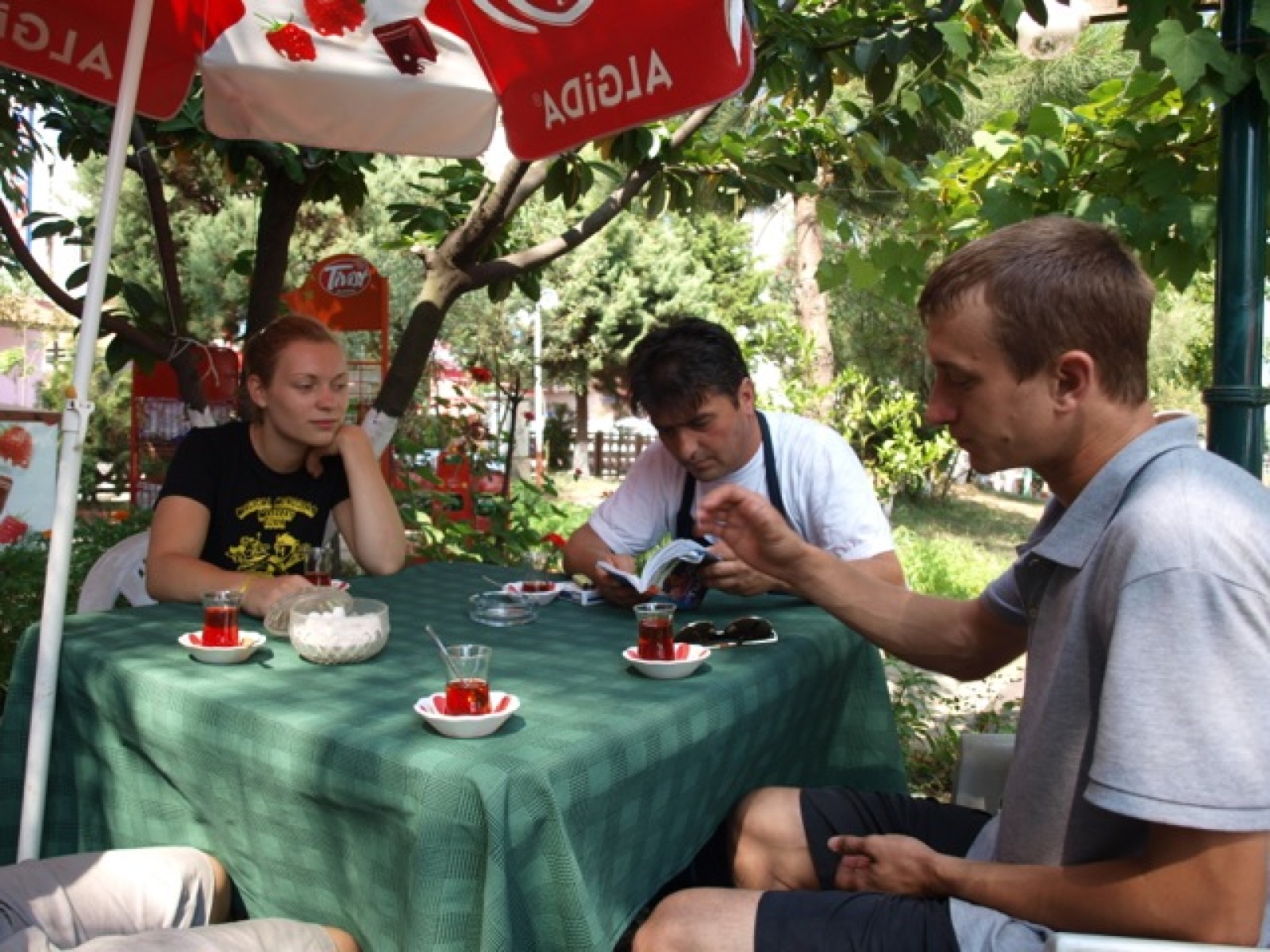 Gul told us he would be picking us up after work. We spent the afternoon horsing around with a soccer ball at a nearby basketball court, washing clothing in a parking lot, and eating hospitality food delivered by enthusiastic children courtesy of Foka cafe. 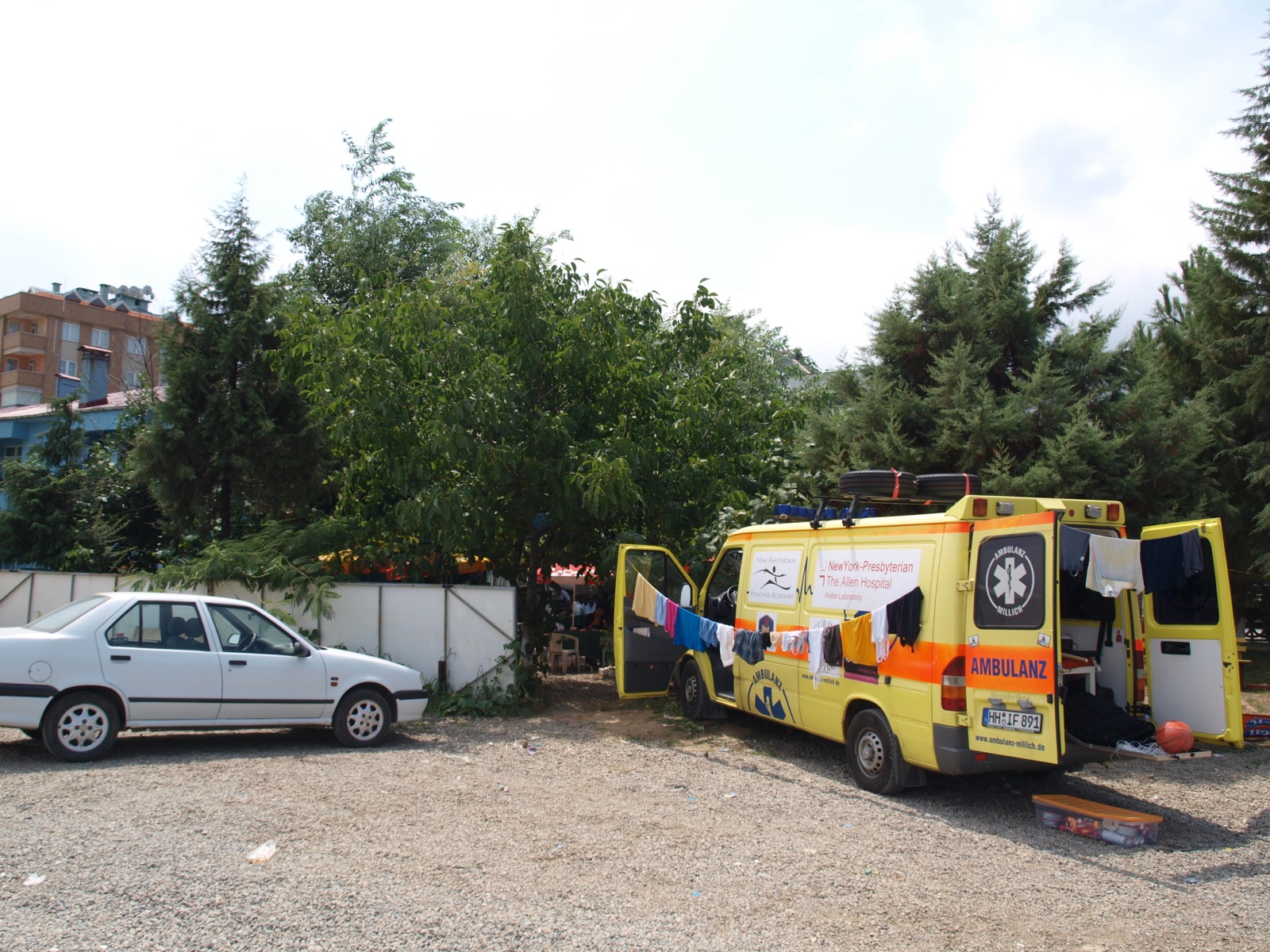 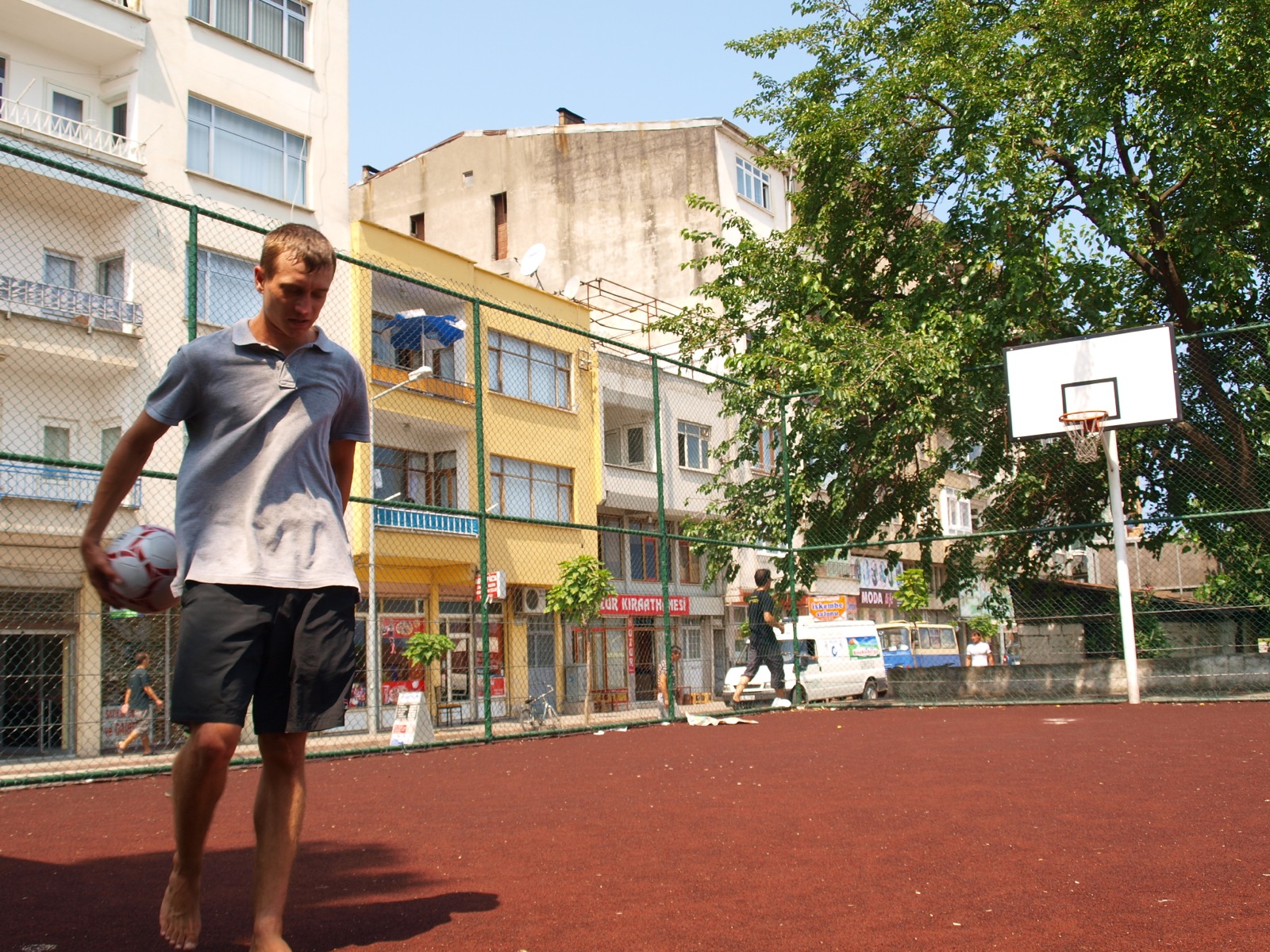 Our friend arrived in tshirts and shorts at 4 with his brother Mustafa. They drove up in a tiny Honda civic hatchback with a trunk full of beer and bread. We all piled into the tiny car, surely ignoring local safety regulations and sped down the highway to a nearby wooden pier.

Sure enough, a medium sized, old, rickety wooden motor boat was waiting for us. The boat must have been 30 years old and showed obvious signs of use. We took turns steering the boat out to sea and anchored not too far off from a beach. We spent the next couple hours lounging on the deck of the boat, drinking beer, diving into the warm water, and living the Turkish high life. 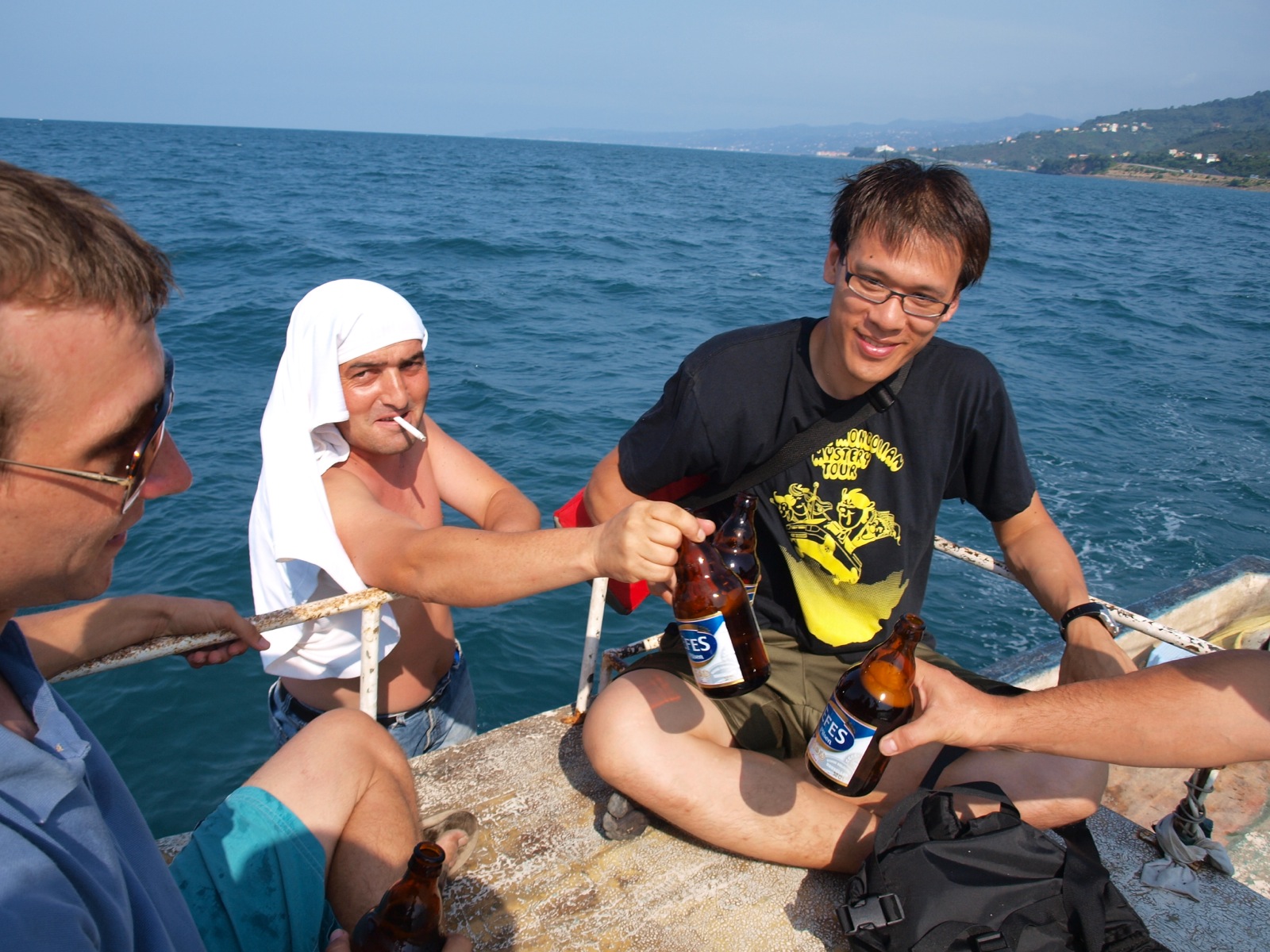 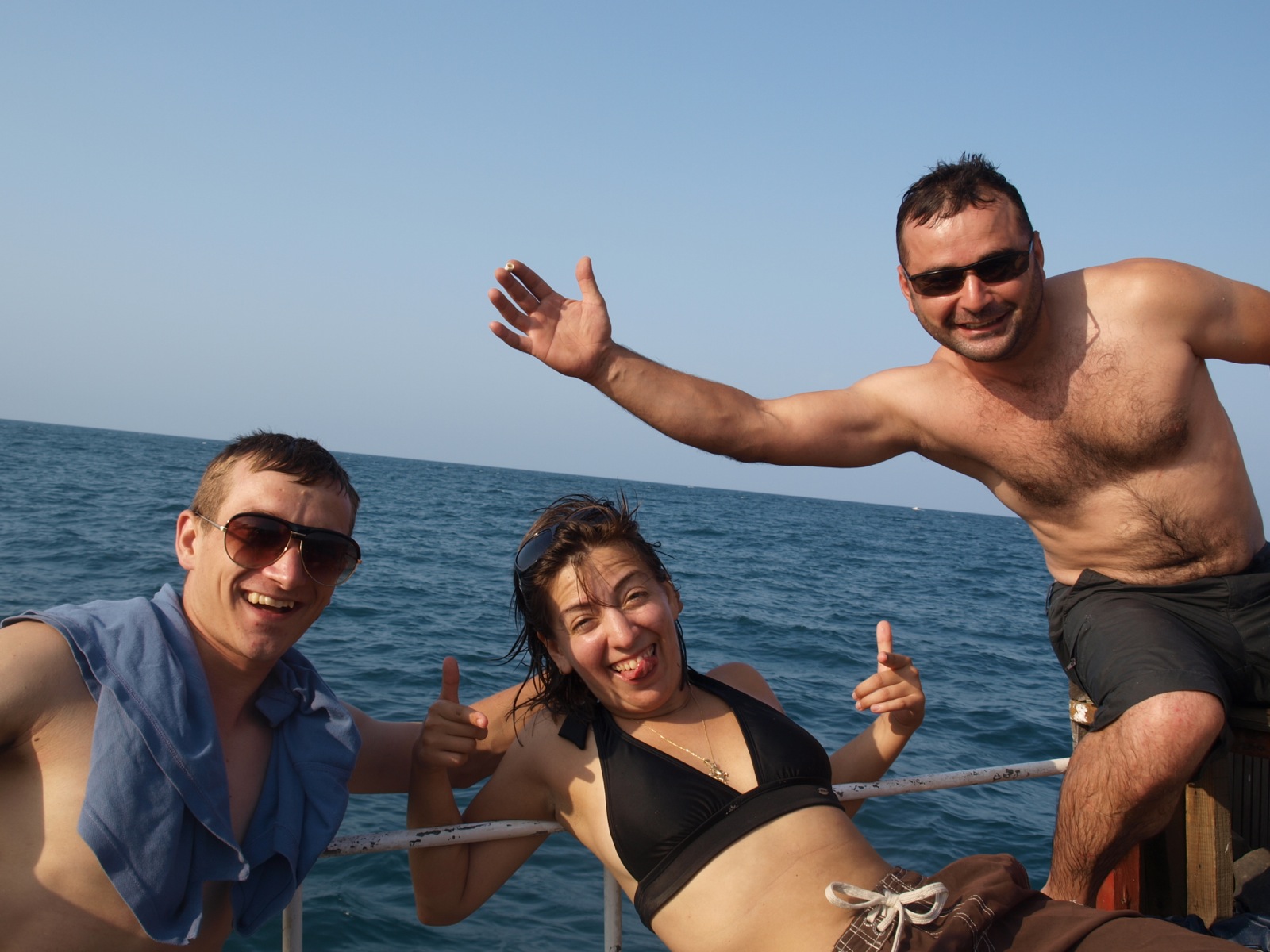 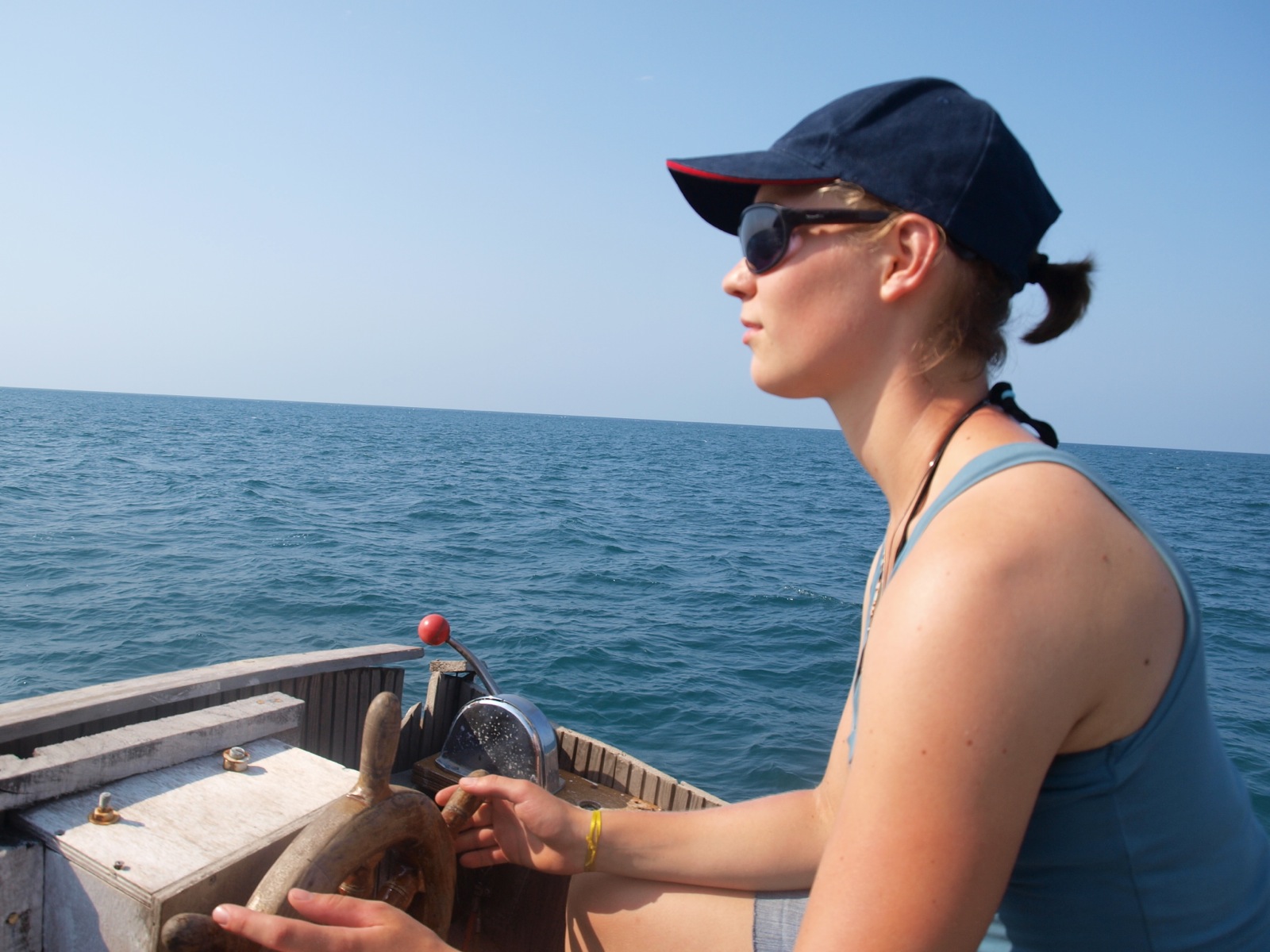 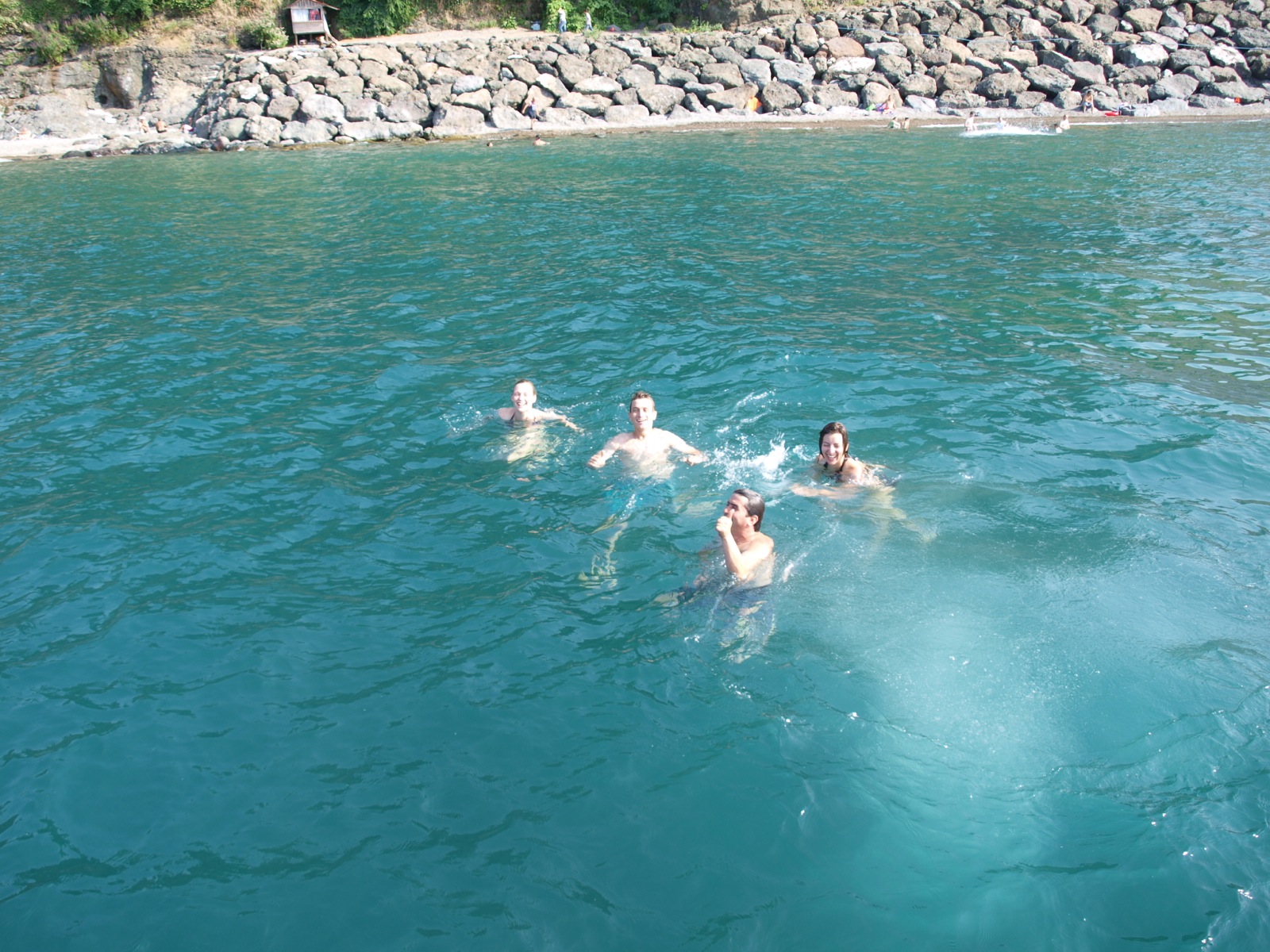 We returned to the ambulance at 6, laundry still hang drying all around our ambulance. As we took down our laundry preparing to leave, they once again they tempted us to stay. We were invited to dinner on top of a mountain with a view of the Black Sea. Once again we deferred our plans.

They took us up a winding mountain path, again in their Honda. With roads narrower than the ones up the greek mountain, they predicted correctly that our ambulance wouldn’t have been able to scale the mountain.

When we reached the top we found a breathtaking view of the entire area: Gorele, the black sea, the surrounding mountains.

Almost out of a fairy tale, the family welcomed us travelers with a home cooked meal of braised chicken, stewed eggplant and yogurt with cornbread. Apparently the head of the house was the town magistrate. His family had been taking care of the mountain for hundreds of years.

Although communication was limited the atmosphere was undeniably great. They showed us around their house and introduced us to the local crop: hazelnuts. This region is known for hazelnuts and August is the harvest month, explaining all the beds of hazelnuts we saw drying around town. After dinner we sat around the table chatting. Tom complemented the chief on his chest hair. Judy and Lillie tried a hand at some Turkish line dancing. The chief elder fired his gun into the air for us and I sang them the only song in my repertoire on my ukelele. 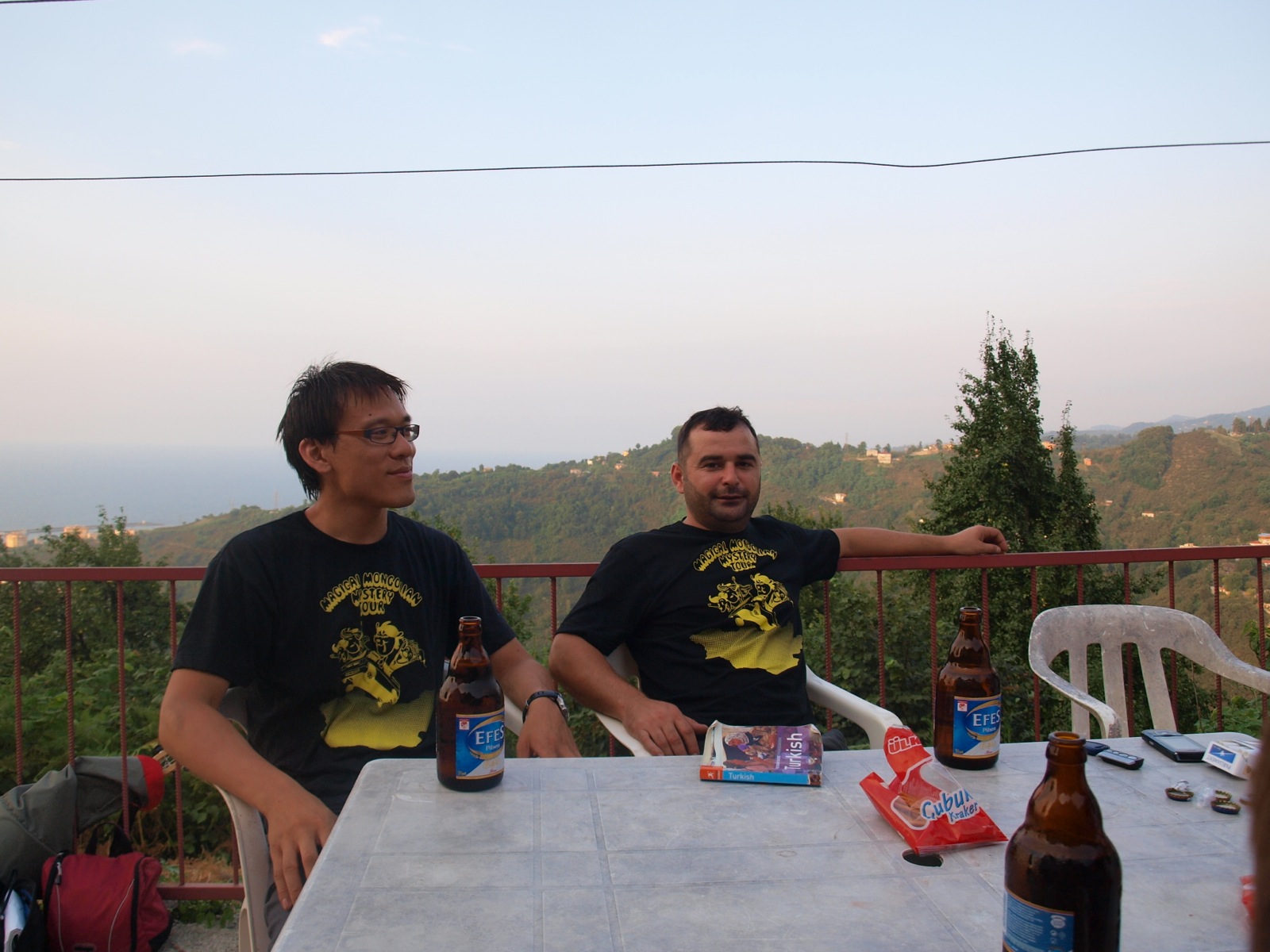 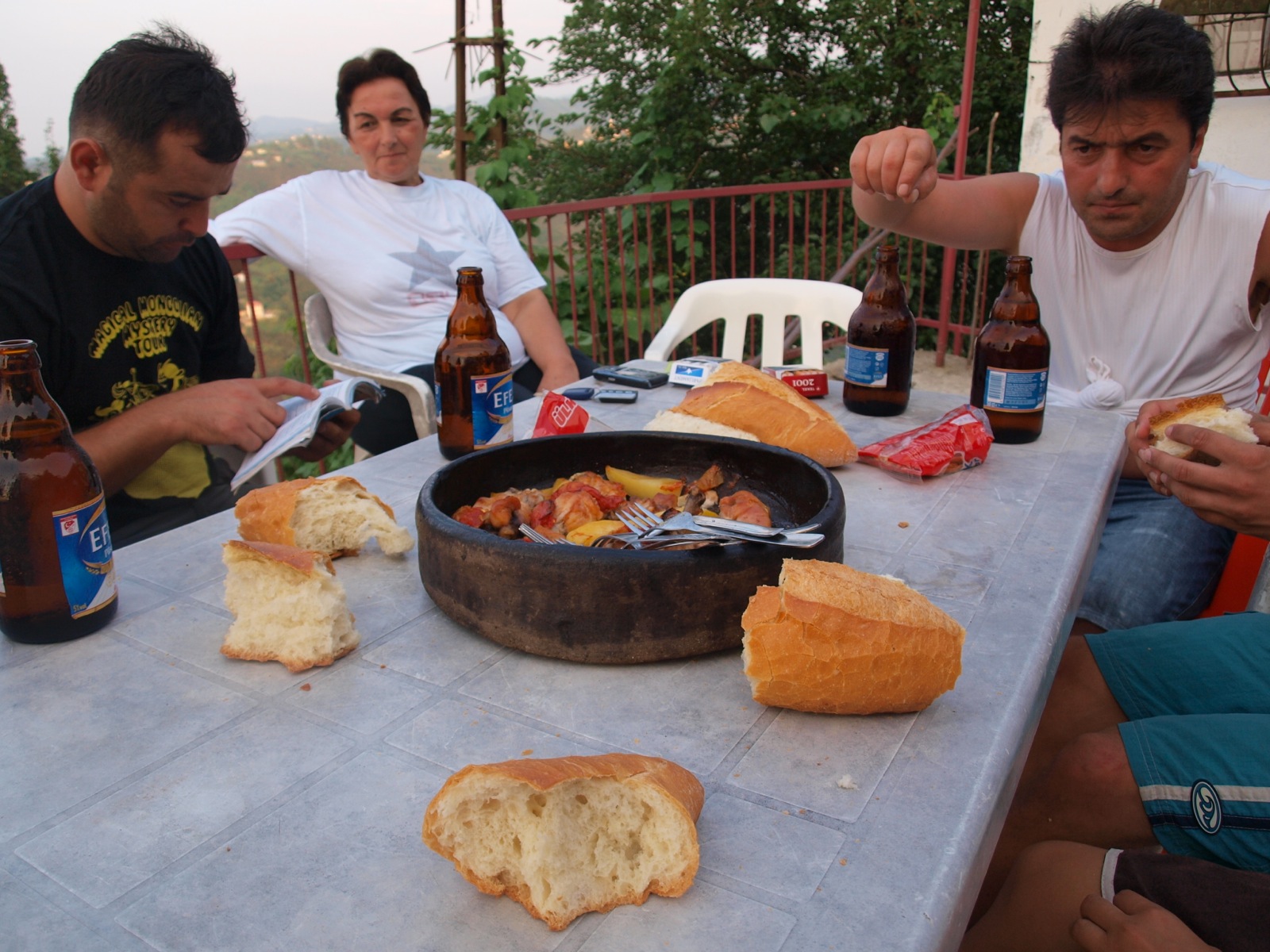 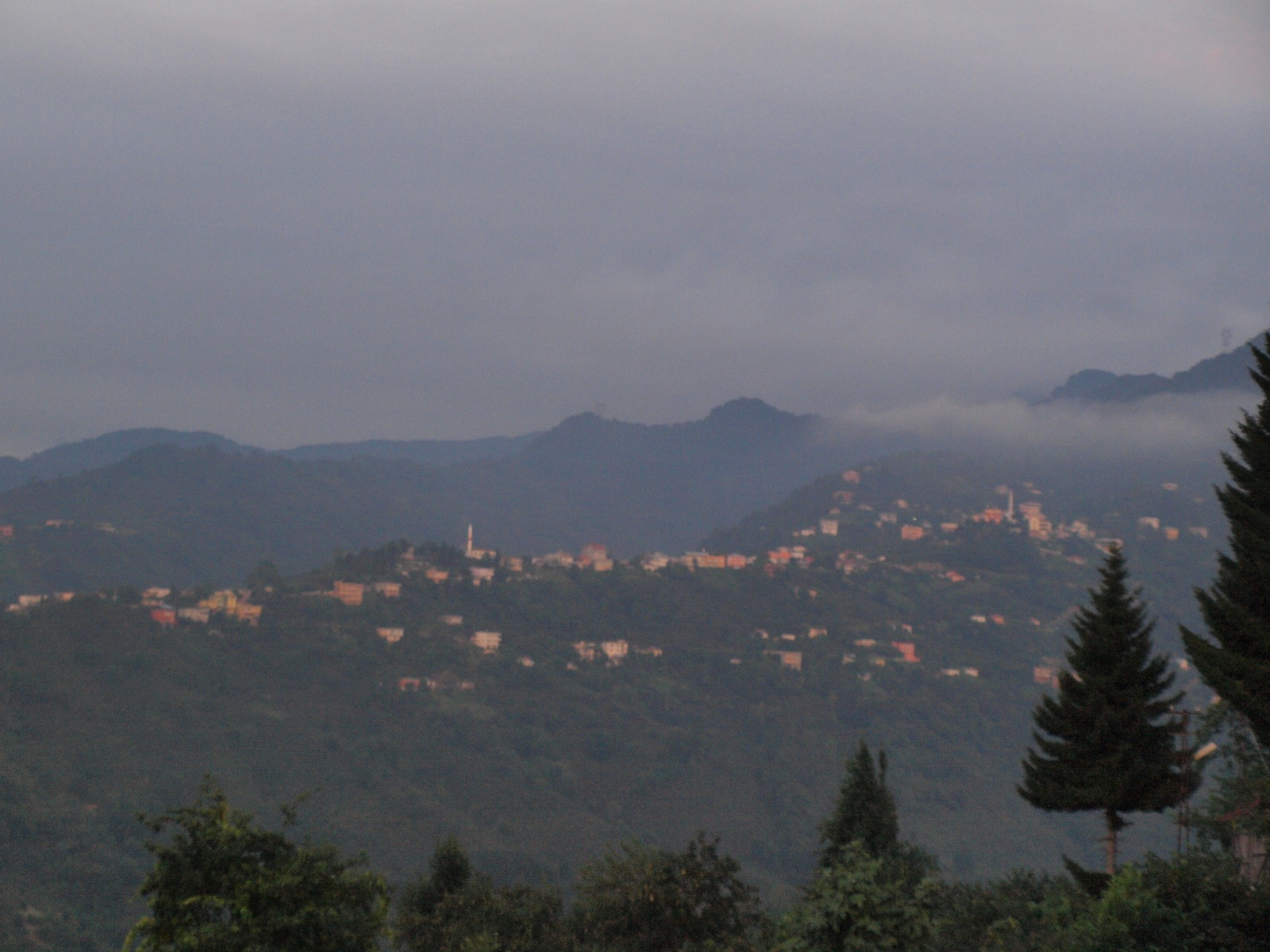 We returned from a fantastic evening, well fed and refreshed. We were once again tempted by the brothers to one last cup of tea. This time we were able to stick to our composure and say politely refuse even more hospitality. We said our goodbyes and sped into the night, blue lights flashing. 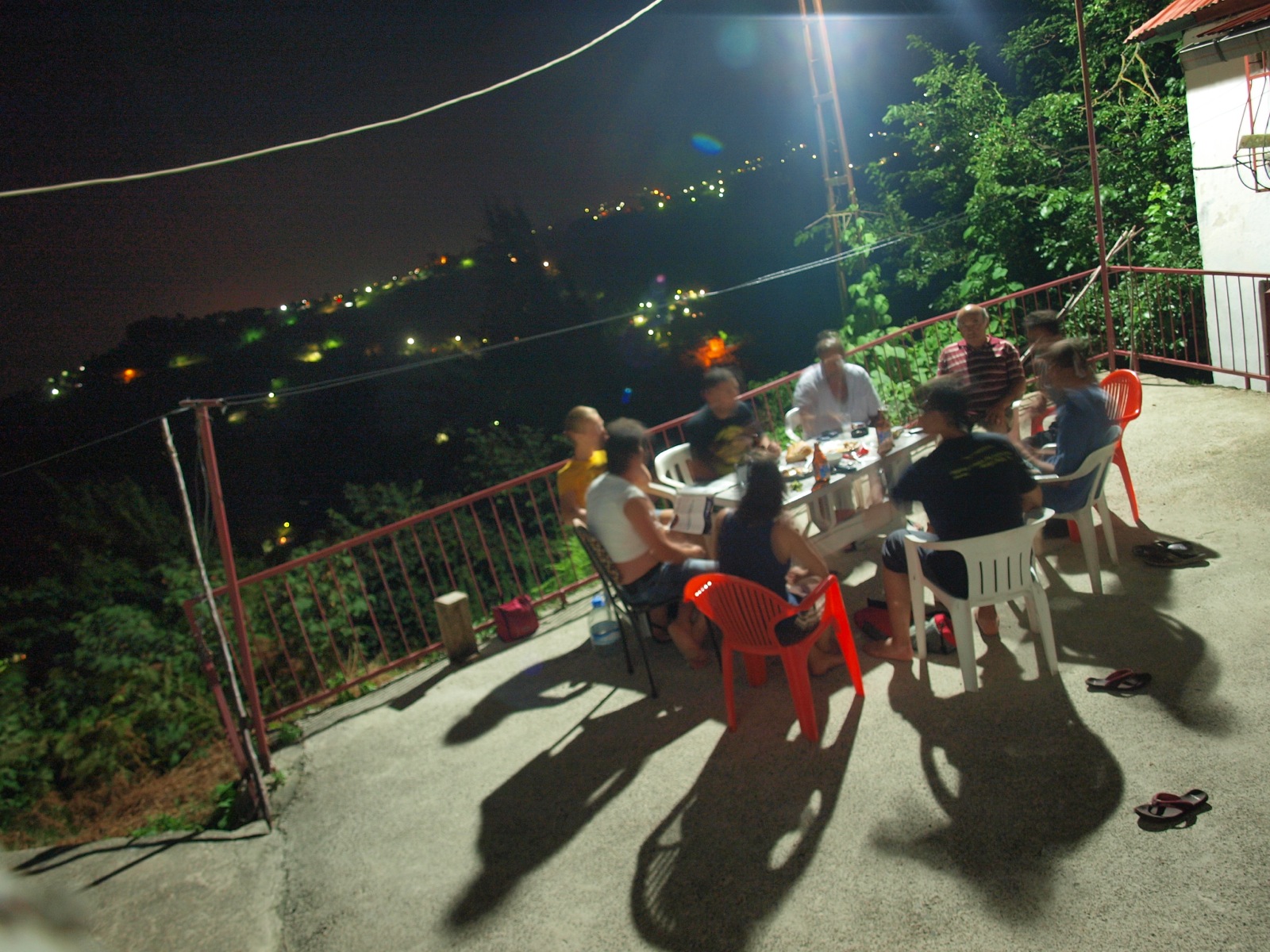