by Stephen Jan in Khyagt, Russia

Armed with Alena’s helpful directions, we confidently exited Ulan Ude. Despite being unable to read Russian road signs, we were able to blindly follow Alena’s instructions and find the open roads, once again sharing the highway with horses, goats and cows. 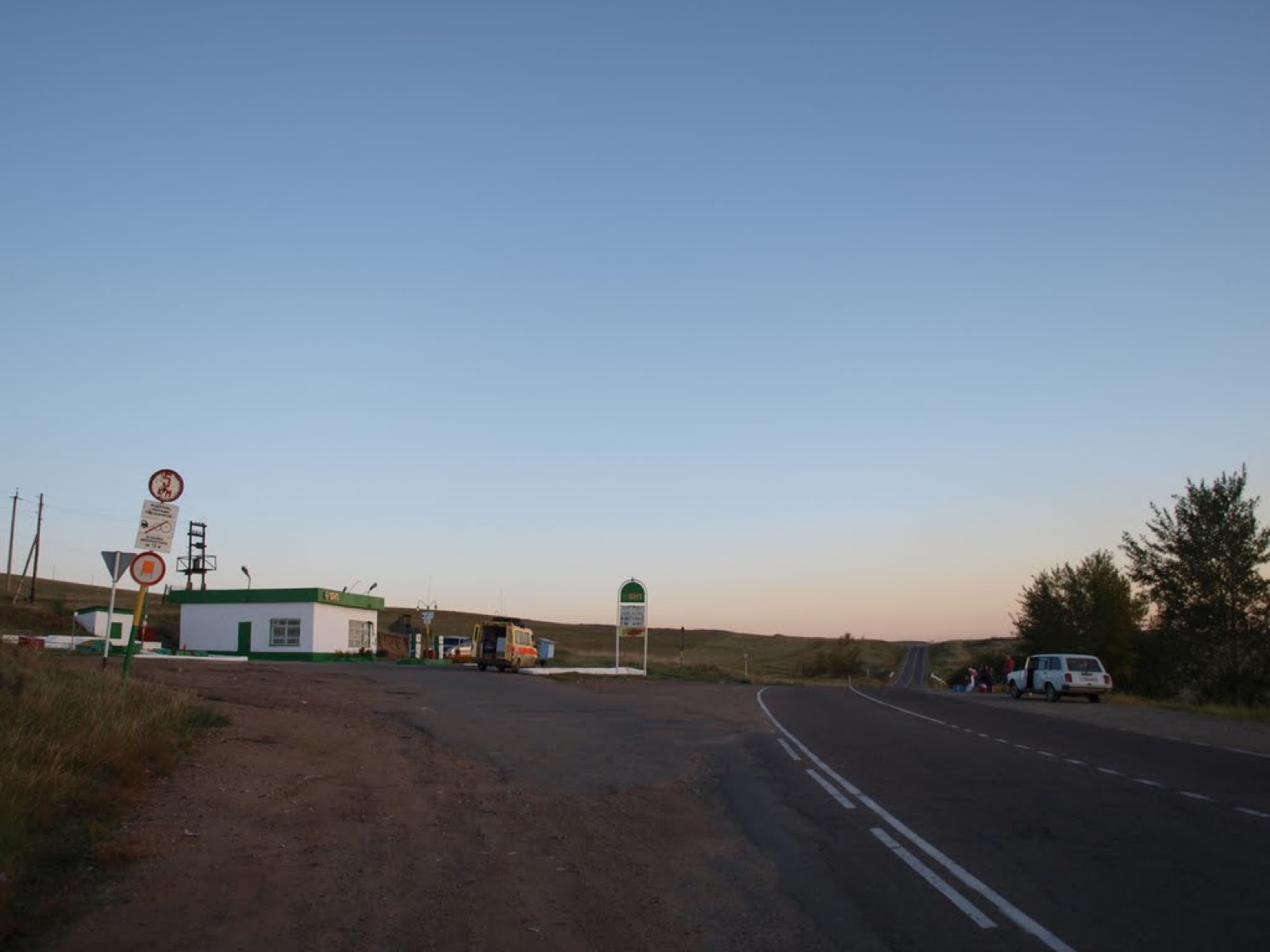 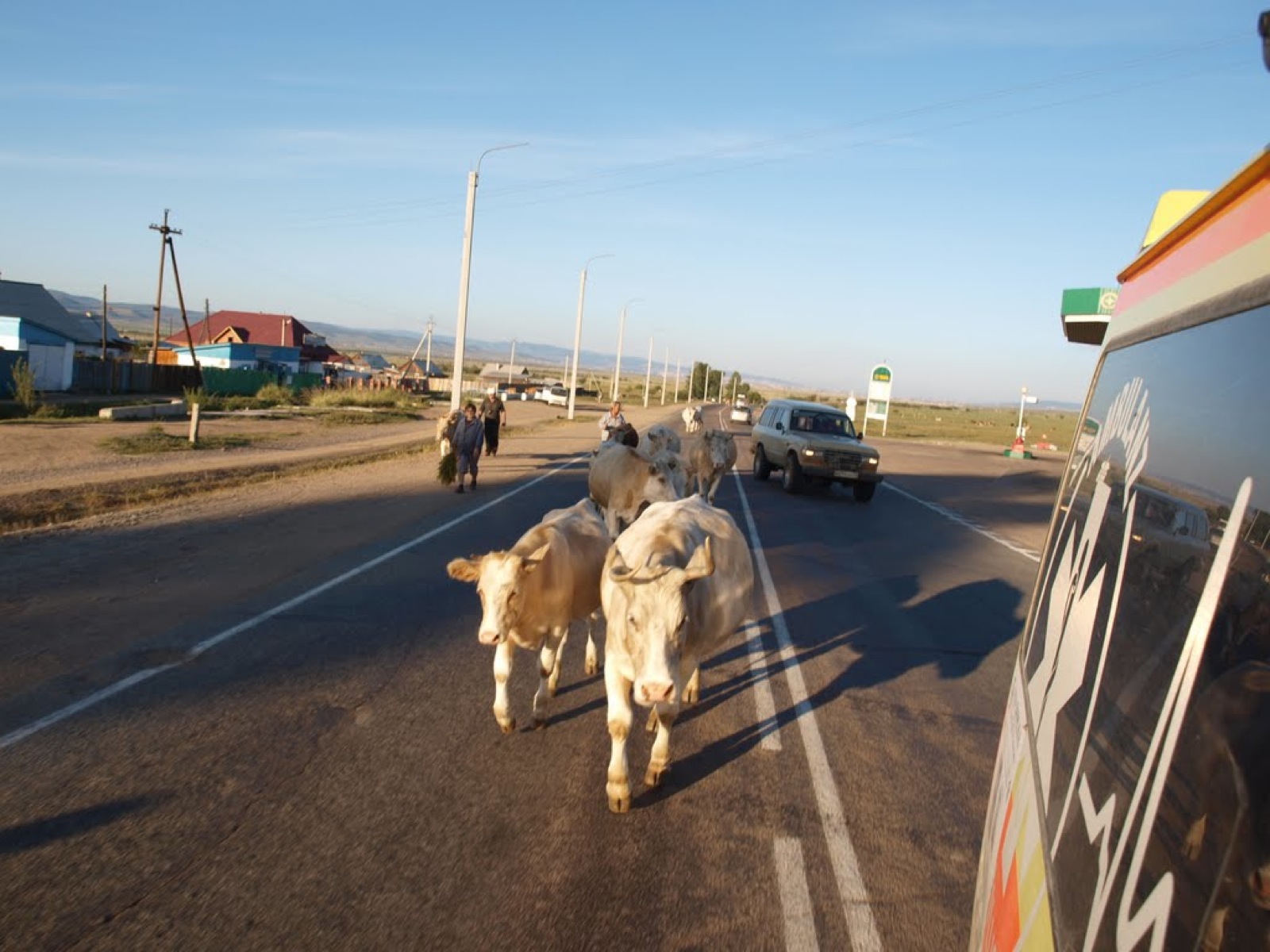 If you were to take a look at the map between Russia and Mongolia (cuz we so often do), you’ll notice that the route is anything but straight forward. We had expected to see road signs with increasing frequency as we approached the border. However, we found the opposite to be true. In fact, straight, spacious, south-bound roads turned to narrow, bending, unmarked paths.

At one juncture, while taking a K-turn, Tom once again beached the ambulance. This time he backed into a deep trench dug into the side of the road (presumably a rain gutter and not an intentional road hazard for the dim-witted). By then we had become experts in getting stuck and unstuck. We stood in the middle of the road, stopped a passing truck, and plead for help using sign language. Given that this was the third time that we had to do this, we were pretty unfazed throughout the entire ordeal - though that didn’t prevent us from calling Tom an idiot.

The main highway turned into a web of tiny unmarked roads. To us, that was a sign that we were close to the border. We drove around in circles trying to find this so called “international” crossing without much sucess. Once again, we resorted to stopping cars and asking for help. A scrappy looking gentleman stopped for us and motioned to follow his car. We followed his white rickety Lada for about 10 minutes, winding around the streets of this unknown town, until he led us behind giant factory. Lo and behold, we arrived before a line of cars queued up in front of a barbed gate. We were baffled by the fact that the international border crossing between these two great countries was behind a giant abandoned looking factory, but we’ve seen stranger things on this journey. Without even an opportunity to say thank him, the man drove off into the night.

We were finally at the Russian side of the border, arriving at around 11pm. The border was closed for the night. We’d have to wait until the following morning to cross. Once again, the team froze in the ambulance. Although this time, not only were we freezing, we were also starving.

Early the next day, we woke up to the sound of our grumbling stomachs and the sound of trucks firing up their engines preparing to inch forward toward mighty Mongolia. We too fired up our engine, but only to turn on the heater and stave off frost bite.

The Mongolian driver in front of us was quite a character. He kept his white Toyota in immaculate condition by wiping down the car with a rag every 30 minutes. And when he wasn’t wiping the car, his wife was. He sauntered over to our car and overtly checked me out through the windshield. I looked back at him, bleary eyed shivering in the driver’s seat. He opened the passenger side door and started talking to me in Russian. Of course I shugged my shoulders. He spotted my IPhone and then used sign language and whistling to offer to sell me his cell phone. I politely declined. He spoke no english, but the man definitely had the art of ad-hoc sign language down. When the border finally opened at 9AM, he non-verbally instructed us to move on ahead and bypass the line of Russian and Mongolian trucks and cars. I had no idea why but it appeared that the Russians, the Mongolians and the border officials were okay with it so we happily obliged and drove around to the front.

We entered the our final “No Man’s Land” between Mongolia and Russia after some paperwork and a breif inspection on the Russian side. There, sitting in the vast open lot in front of the Mongolian customs building, squatted a lone Mongol Rally team wearing shades and basking in the sun on portable lawn chairs. 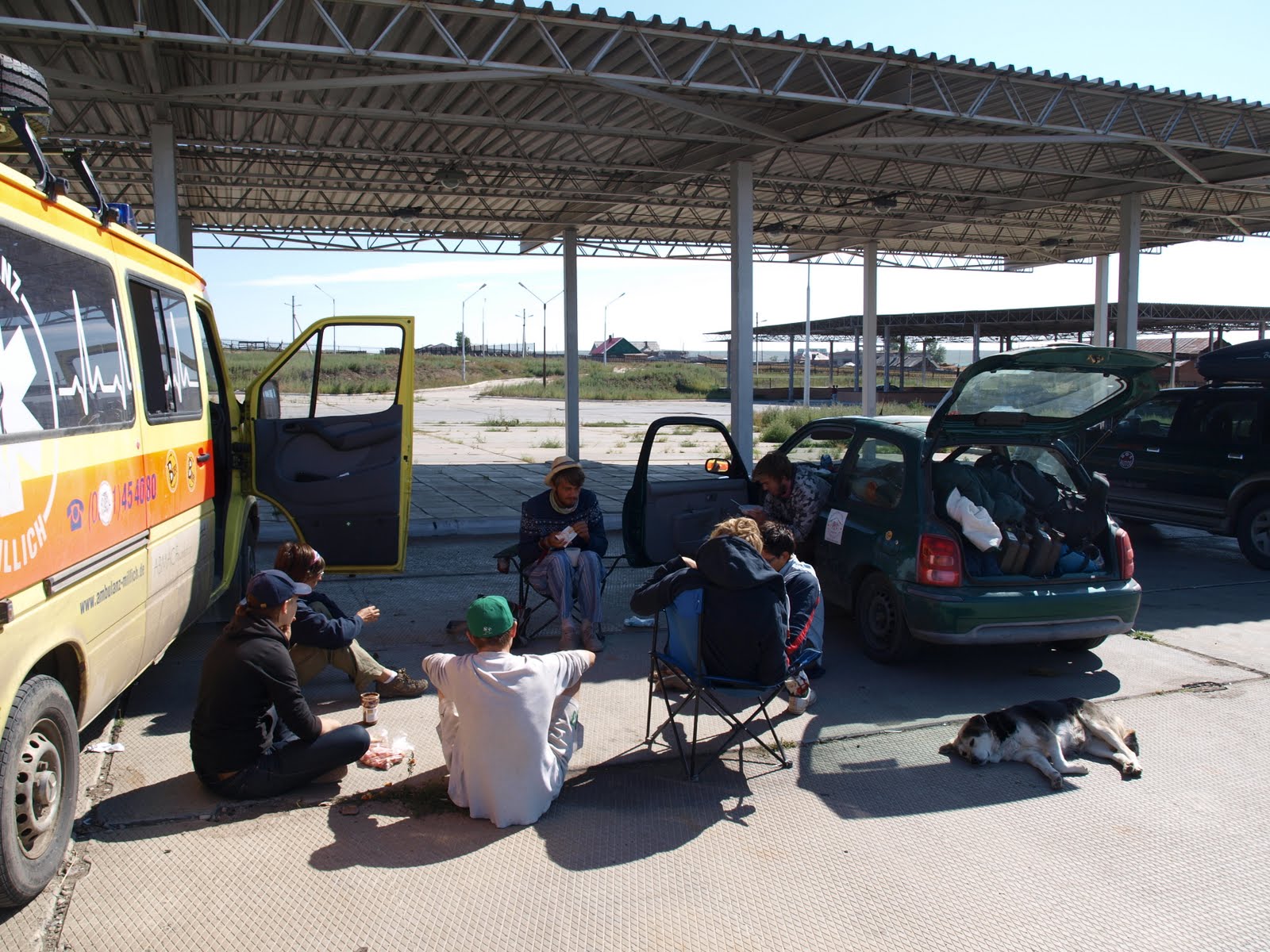 Team “Four Chaps Without a Prayer” had been stuck at this northern border for the past 3 days. Their circumstance began in England 3 days before the rally when their trusty mechanic called them to report that he had given up trying to make their ebay purchase road worthy and that they had to buy a different car for the Mongol Rally. Their ordeal got even more complicated when they changed their entry border from west Mongolia to north Mongolia. Due the changes upon changes, their car information was missing from the paperwork here. They had been waiting 3 days for the proper documents to trickle through the Mongolian beaurcracy and arrive at the fax machine here at the border. Meanwhile they’ve been camping out on this lot seeing Mongol Rally teams come and go.

The other team reported being severely reprimanded when they unleashed the football on the lot. We too decided to brave the authorities by bouncing our basketball and skipping rope around the premisis. And yes, we too were sternly reprimanded by the shrill voice of a border agent from across the lot.

Team Four Chaps without a Prayer adopted a strategy that basically amounted to being as annoying as possible such that the authorities would eventually let them move along. Although Lillie insisted that that was the best strategy, I wasn’t ready to adopt that tactic just yet. While the other team battled the officers, exploding on them when they discovered the border officials sitting in their office playing solitaire, we sidled up to them begging for tea, crackers, and toilet paper for the restroom.

At 6:00 or so, I all but lost hope that we would be getting into Mongolia by the end of the day (7:00). But after the last 40 days of travelling, staying a night at the border wasn’t so bad. With the end in sight, nothing was going to cut into our enthusiasm. I went into the office at around 6:30 to see the custom official handling our papers one last time before preparing to make arrangements to camp out. She calmly smiled and presented our completed papers. It took seven hours but we were so thrilled to get through the border that we insisted that the customs lady take a picture with us, documents in hand. 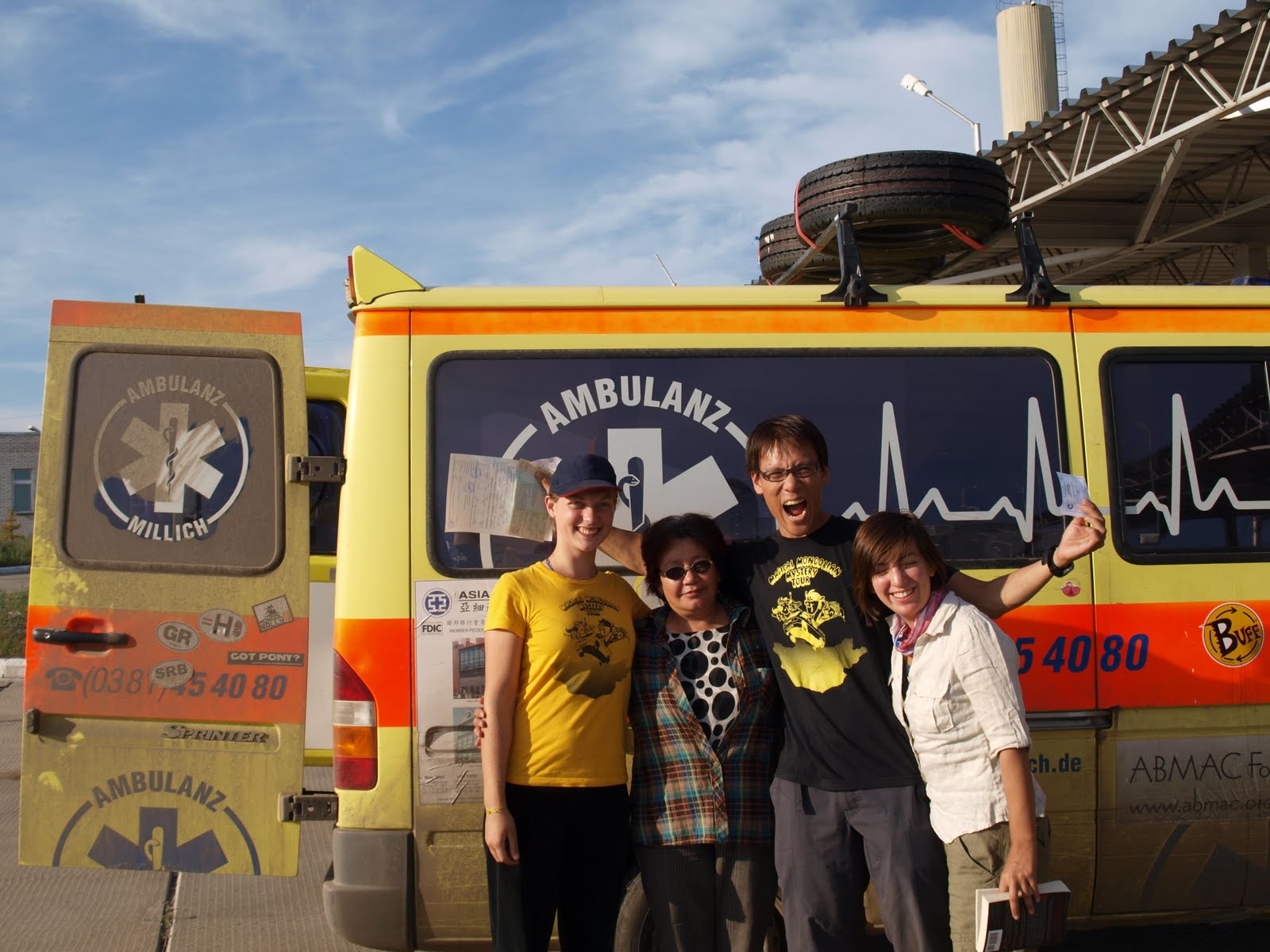 We finally crossed into Mongolia. We were greeted at the gate by locals swarming around our ambulance chanting “rubles rubles rubles” and waving Mongolian Tenges at us. We shrugged our shoulders shook out heads (we were out of rubles anyway) Oddly, in response to our “Thanks but no thanks” these Mongolian entrepeneurs flashed us a middle finger. Welcome to Mongolia.