by Stephen Jan in Ulanbataar, Mongolia 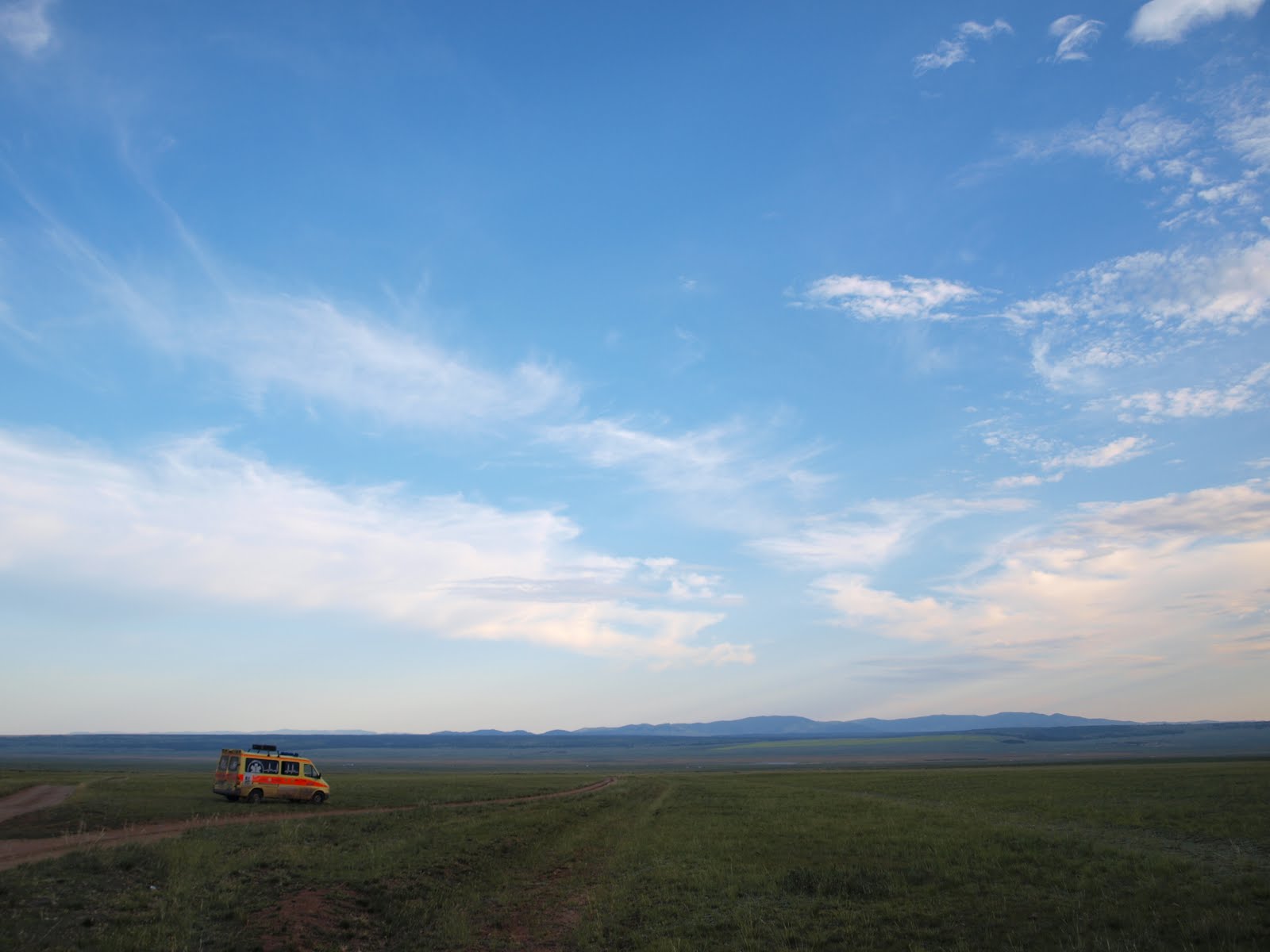 The bordertown on the Mongolian side was about as interesting as a pile of rocks. With only one main street that doubled as the main highway between Ulanbataar and Russia, we didn’t have to worry about getting lost. The town was nothing more than a collection of shacks and concrete blocks that sprouted up along the roadside, feeding on travelers entering and leaving the country. 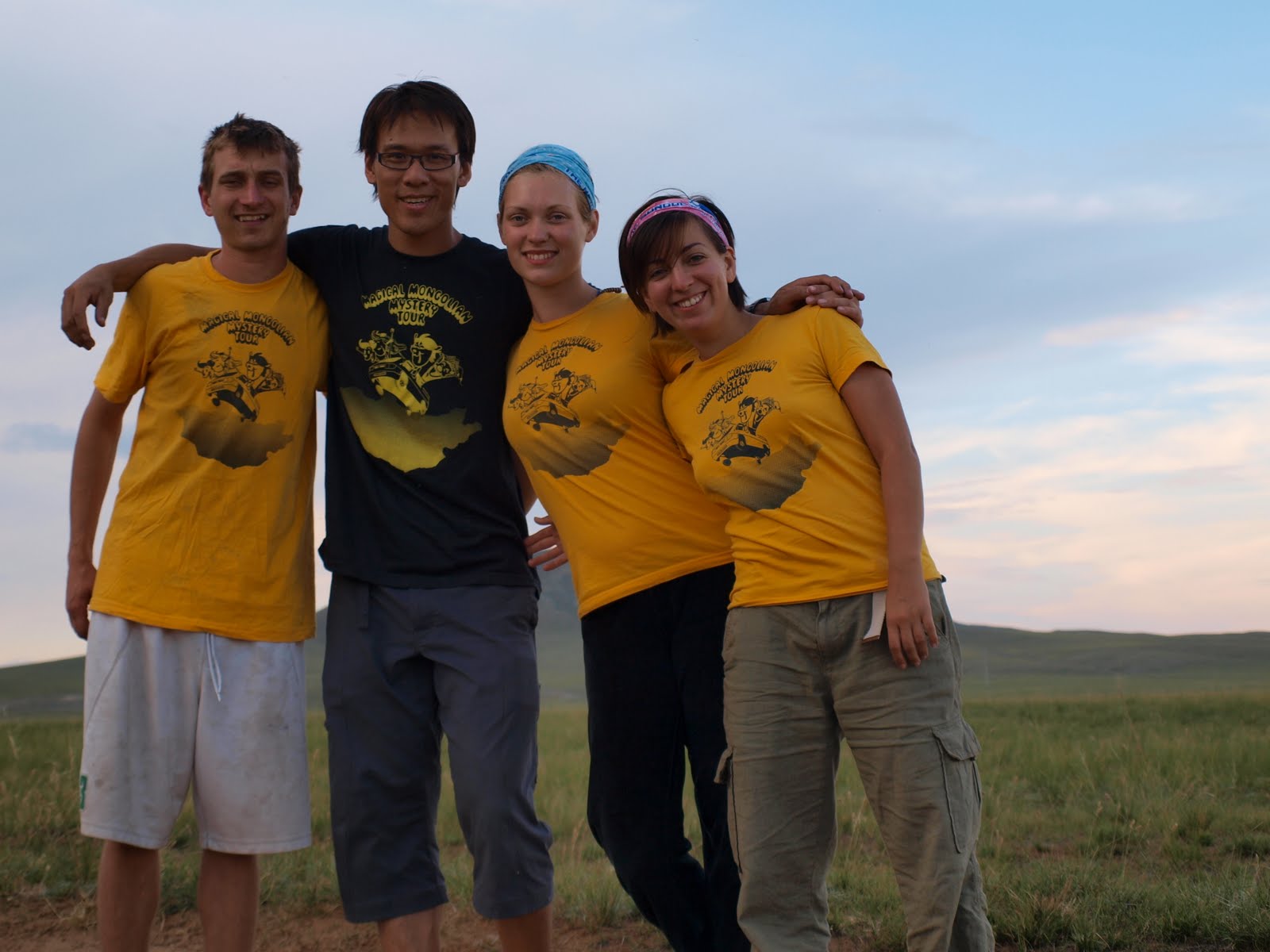 As the settlement faded behind us along with all other visible traces of human civilization, the gravity of where we were and how we got here slowly dawned on us. We have arrived in Mongolia’s vast open steppes after 39 days of driving 17000km through 15 countries, across 8 time zones and have had countless ridiculous experiences. We jumped out of the car and despite the voracious bugs assaulting our exposed skin, eyes, and open mouths, we joyfully chest bumped. 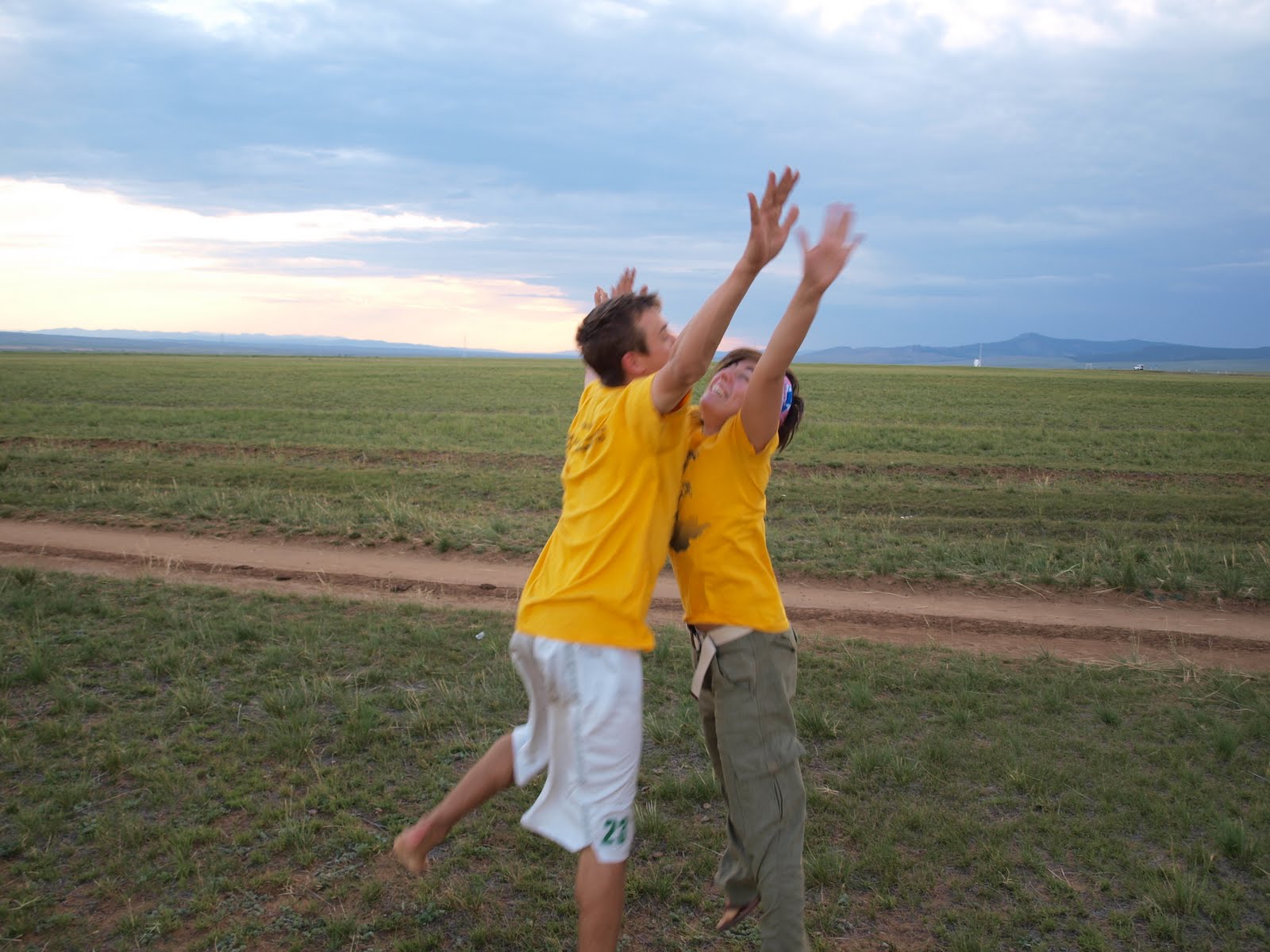 The roads to Ulanbataar were dangerously narrow, nothing new. Aggressive drivers barreling down the opposite direction dangerously swerved into our lane when passing, also nothing new. When the sun went down, there were no street lamps and truck drivers dangerously completely blinded us with their high beam, again nothing new. By now we have become seasoned veterans of brushing off dangerous driving conditions as just a fact of local third world life. 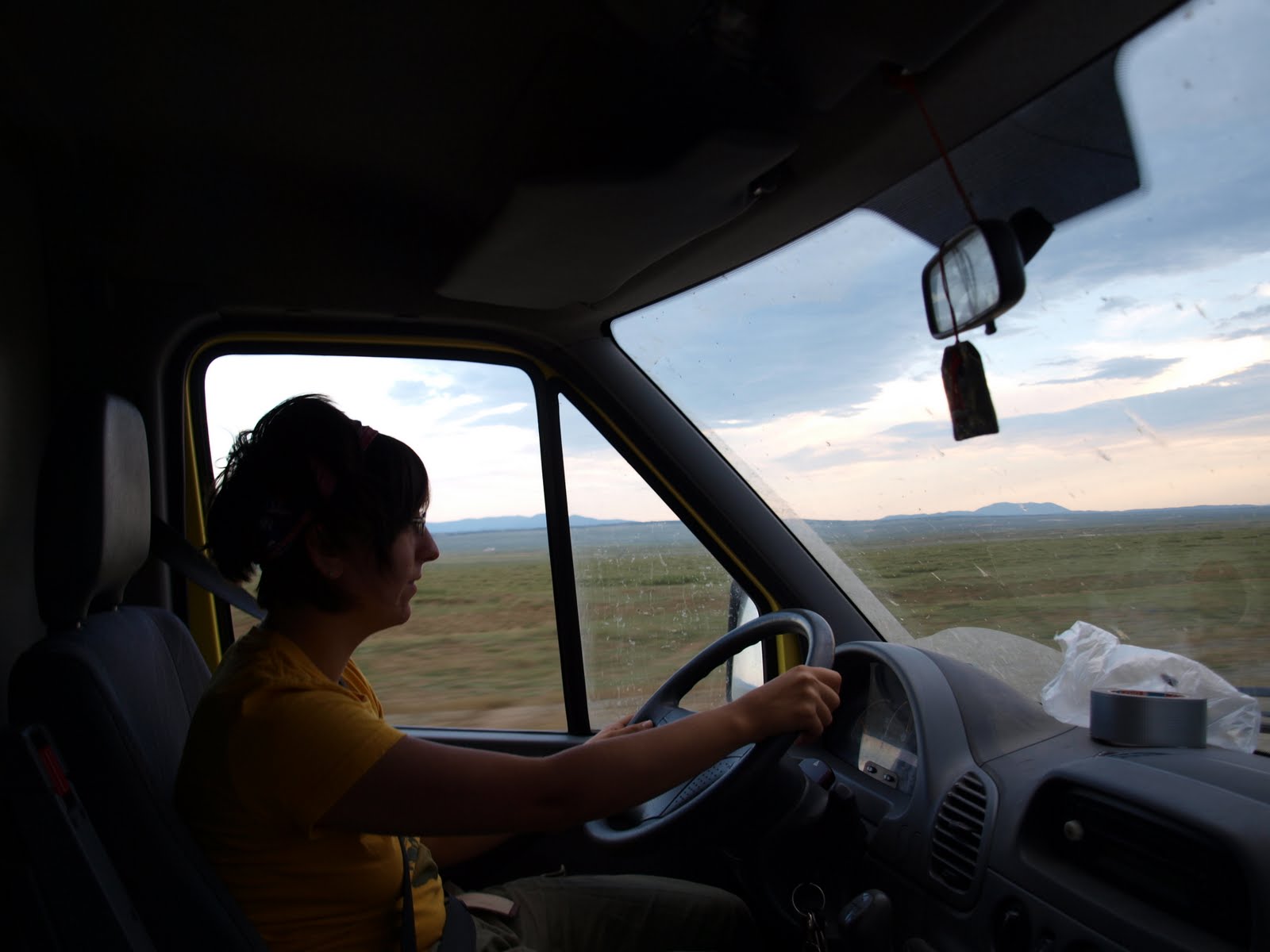 We slowly made our way to UB following periodic signs, passing roaming horses, cows and a band of eclectic cyclists that have been travelling for the last 6 months. The Mongolian landscape coupled with clear open skys was truly breathtaking and impressive. Driving on these roads, we felt as if the entire country opened up to us. 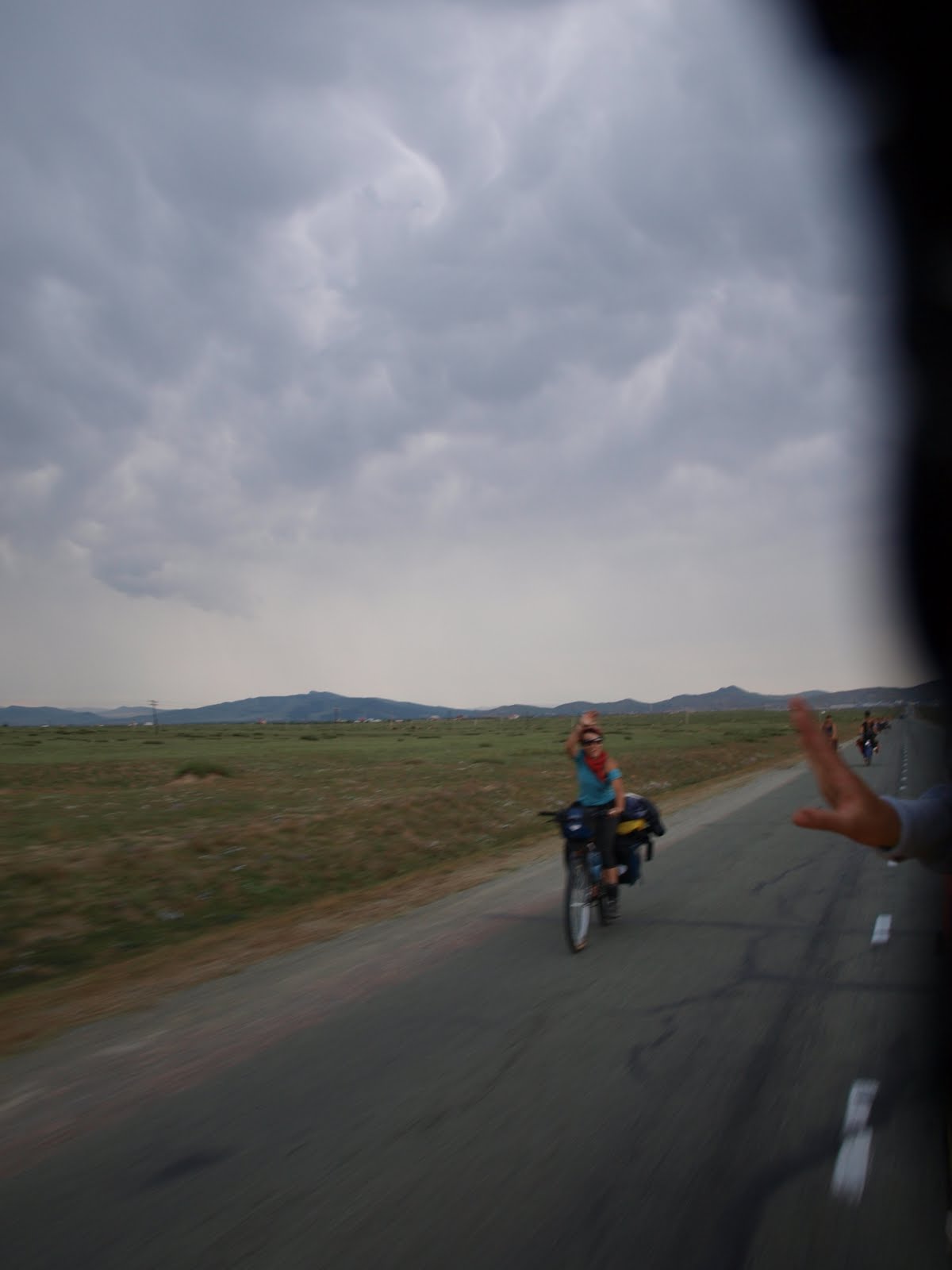 We arrived in Ulanbataar that night, 2am, Sept 1st. We found a hotel in the usual fashion, though this time we didn’t have a Lonely Planet to guide (or misguide) us. We parked the ambulance in an empty lot near a hotel but the security guard instructed us (in sign language) to move the car directly in front of the hotel. He pressed upon us the very real threat of theft and instructed us to take down both our 50 pound spare tires from the roof rack. Next, we roamed the unlit Ulanbataar streets looking for food. We stopped at a nice looking hotel to see if there was a nice restaurant inside. No luck. The security guard shooed us away. Seeing how dirty I was, he probably thought I was a Mongolian panhandler looking for shelter. Most the shops were closed but we eventually found a cafe brave enough to operate this late at night. We sat in there while a stout female security guard watched four dirty, reeking westerners unceremoniously slurp down Mongolian ramen.

I had been told back in New York that Ulanbataar was a pit of a city. I would have to agree. The sidewalks can best be described as powdery dirt paths. And when we weren’t walking on dirt paths or sharing the street with cars, we’d be walking on beds of rubble. Fumbling through the pitch black streets, we’d frequently come across alcohol reeking shadows stumbling in the dark. That, plus the constant presence of security in both tiny shops and giant hotels alike, gave us pretty good sense of the city’s security situation. No worries, we had a ninja on the team armed with a 6 foot bamboo stick.

After the late night dinner, the team returned to the hotel and passed out in the hotel room. As usual, we had planned to get an early start the following day at 6AM but as usual, that didn’t happen. The first thing Tom did in the morning was to slide open the curtains and exclaim “Ah! Ulanbataar!” to the beautiful view of a brick wall. 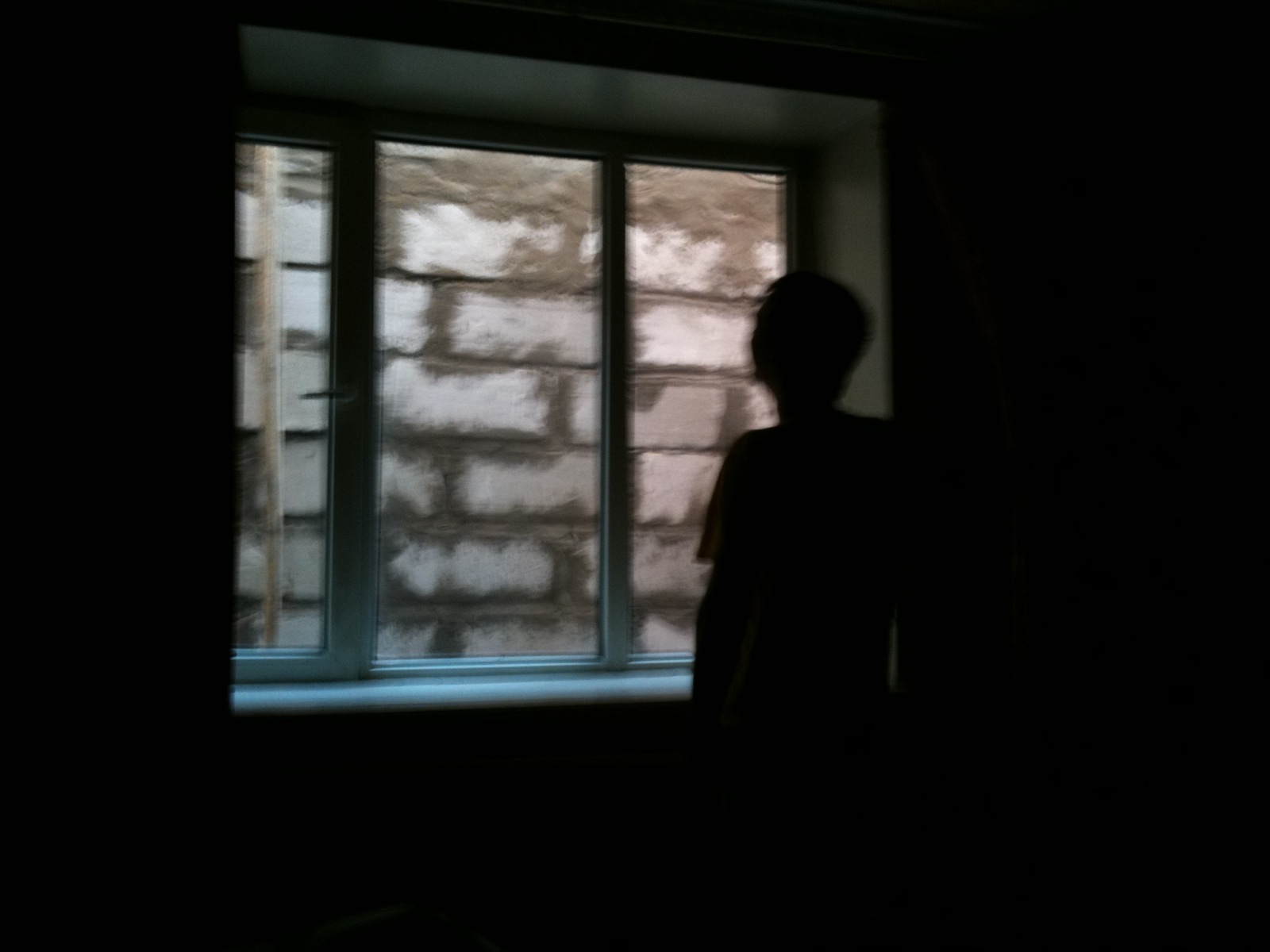 We organized and repacked our gear in the the ambulance one last time and stopped by the Amsterdam Cafe for some delicious English breakfast. 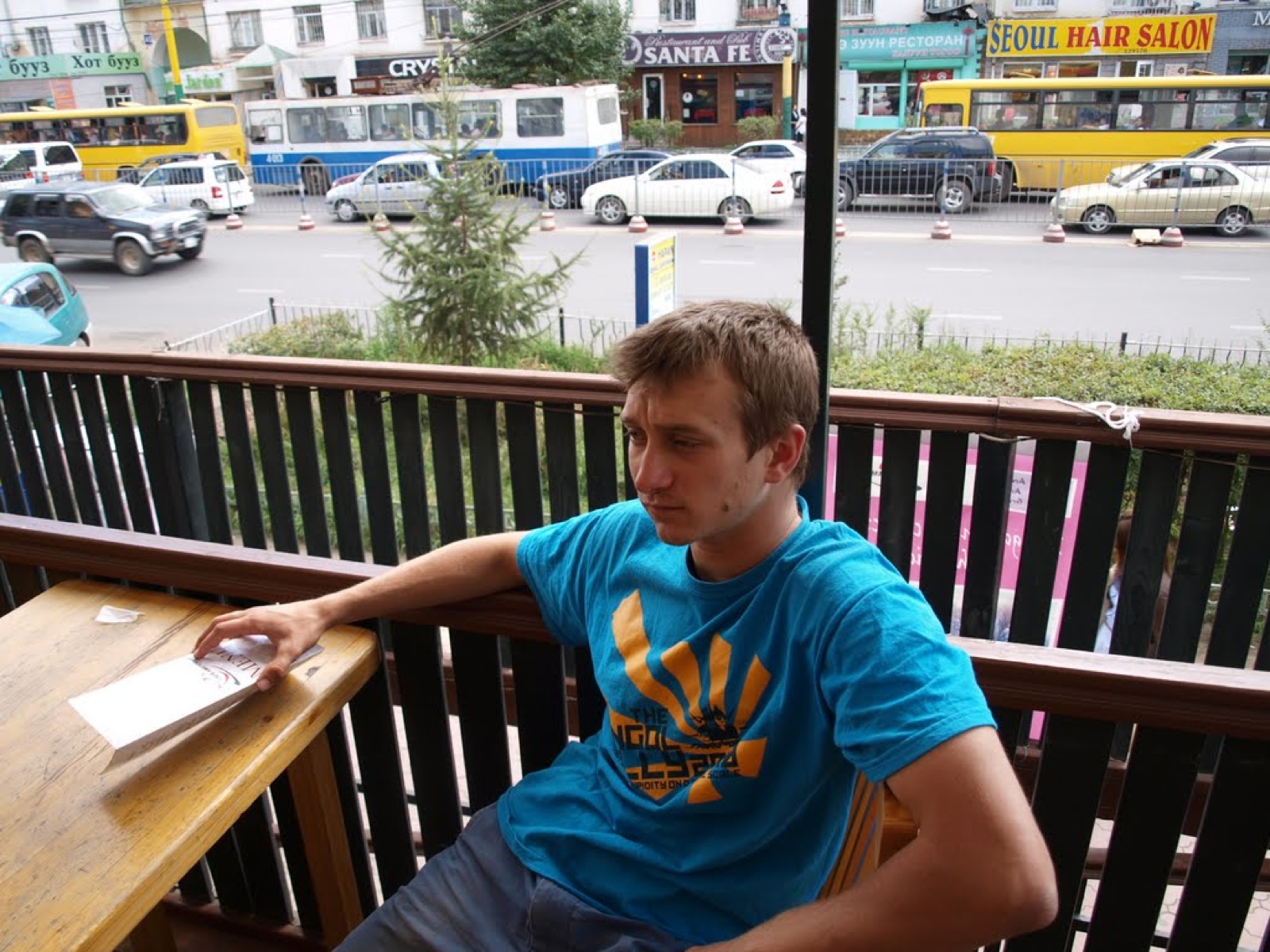 On Tuesday, Sept 1st, 1:59 PM Team Magical Mongolian Mystery Tour crossed the finish line. We had imagined the crossing to be an event. We were looking for a spectacle. There was no red carpet nor fanfare. The finish line wasn’t even a line, it was giant billboard posted above a pub and there was no one there to formally congratulate us on our momentous completion. In fact, there wasn’t even any beer available to us to celebrate. We discovered that we had arrived on the only day that we weren’t allowed to drink. It turned out that in an effort to curb the national Mongolian epidemic of alcoholism, the government deemed the first of every month a dry day. Yep. We arrived on the only day of the month where vendors are not permitted to sell alcohol. Celebratory cokes all around. 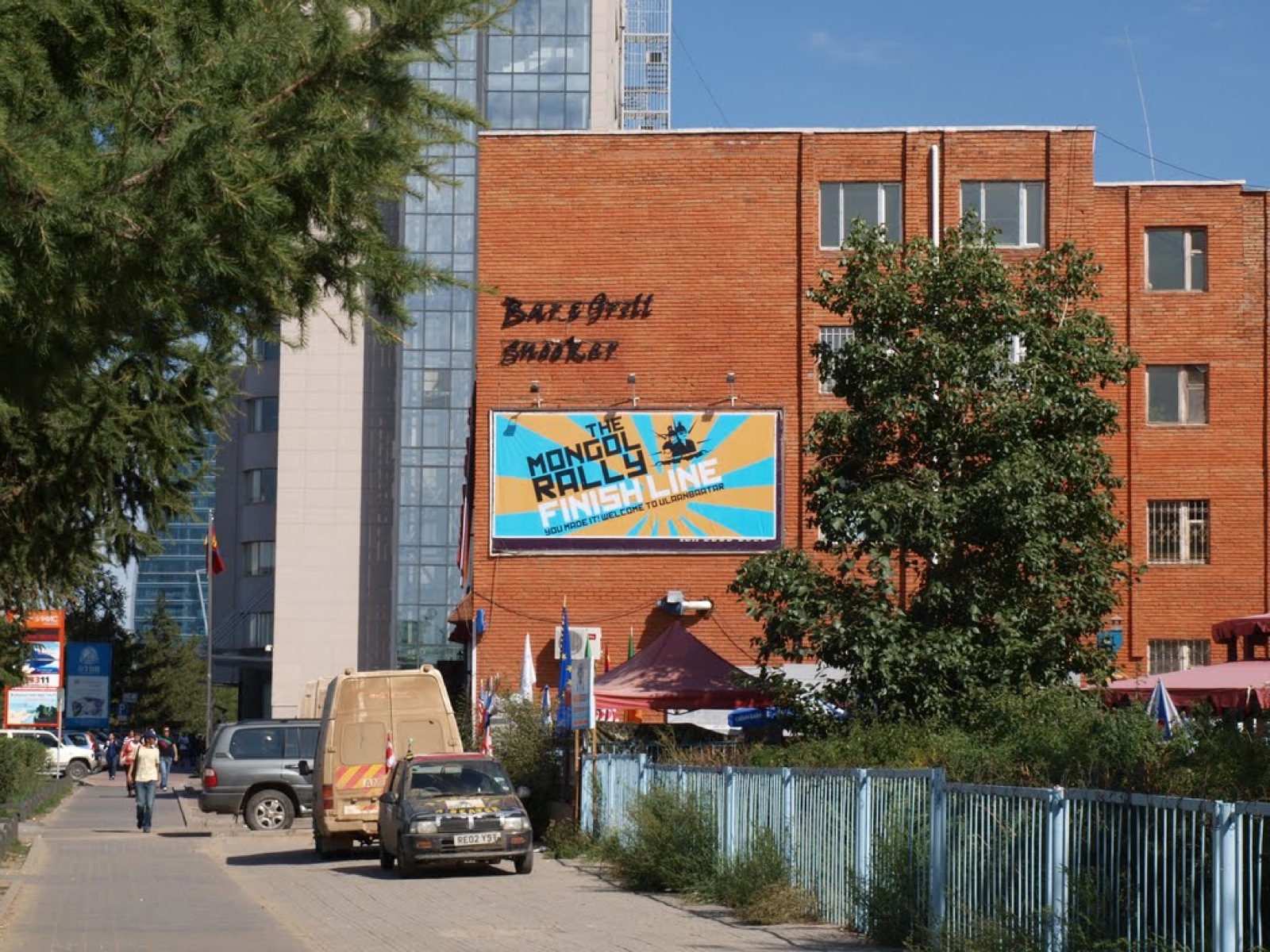 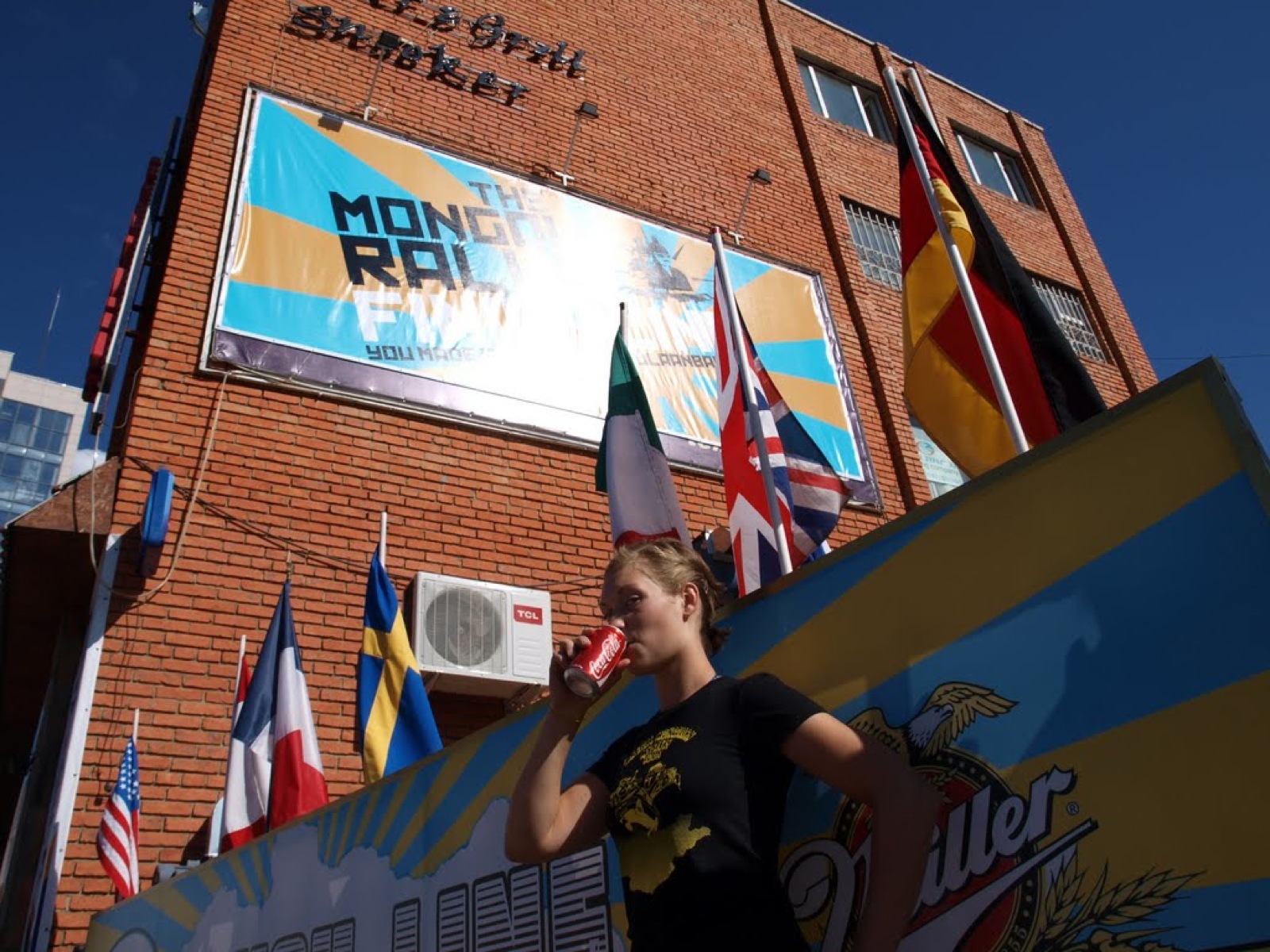 We were reunited with a whole list of teams that we had seen along the way including Divine Fiat, Bataarheroes, One Steppe Away, Team Dino, Beer Bongolia, and Four Chaps Without a Prayer. Even without the beer, we were completely drunk with joy. We exchanged stories and it was clear that everyone had a unique and interesting experience. We felt like we belonged to a new brotherhood of adventurers. 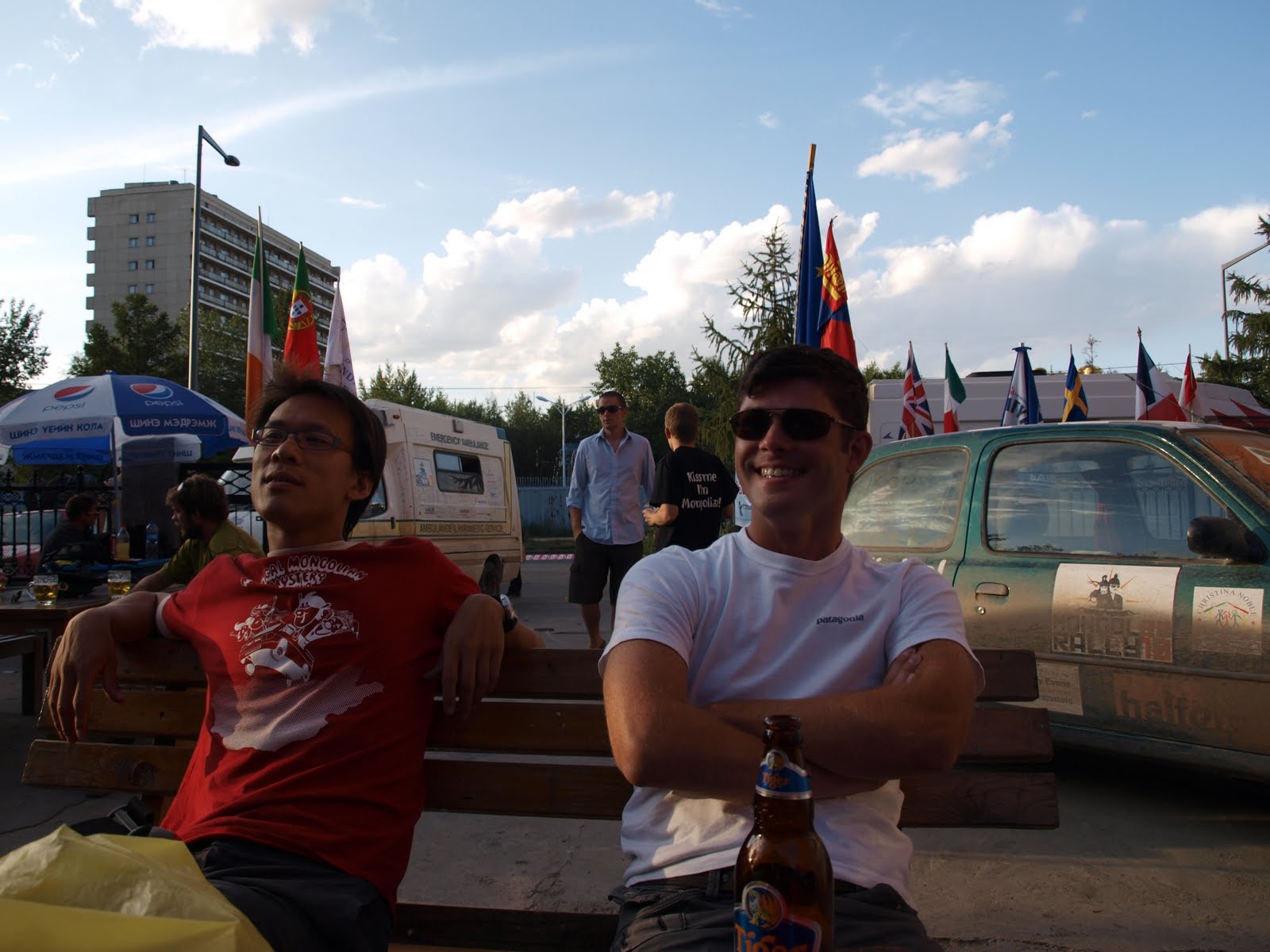 Unfortunatly, our celebration could only be brief. Judy and Tom had a flight to catch the following day at 6AM, Sept 2nd. We swapped hotels for a cheaper room that lacked warm showers, but at 20 dollars a night, no one complained. The night was spent in our crowded hotel room sharing Mongol Rally stories with other teams until it was time for Judy and Tom to head to the airport at 4:00AM. The Mongol Rally life that we had come to know and love was slowly slipping away.

The following day, while Lillie took a trip to visit a museum, I, along with two Mongol Rally Brits, chartered a car to visit the shooting range. Keith at the Adventurists informed us that there was a Mongol Rally pseudo tradition check this place out. There, ralliers had the opportunity to play with things like AK47’s, Sniper rifles, and believe it or not, Rocket Propelled Grenades. Not only that, for 150 dollars, you can drive a tank (no idea what type) up and down the Mongolian hills. On top of all that, for 50 dollars more, you can fire the cannon - capitalism at its finest. Well I’ve never fired a gun before, let alone an RPG. I leapt at the unique opportunity to relive my childhood dream to be an army superhero armed to the teeth. And oh man was it glorious. 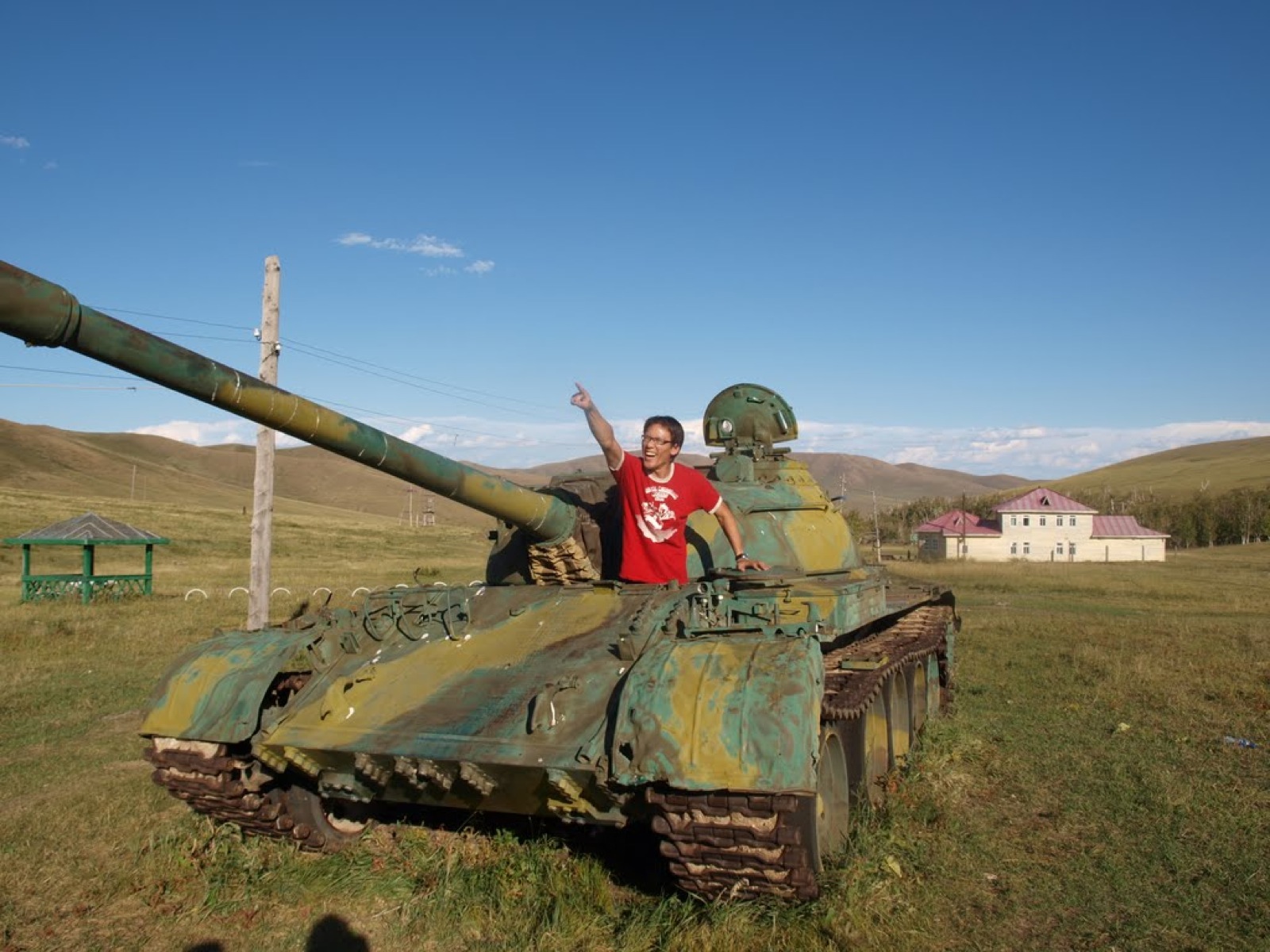 When it was finally time to hand over the keys and documents, I felt sad to say goodbye to Penny, relief in completing the mission, silly that i was giving away a yellow ambulance to charity and serious in that there would be no turning back from this transaction. It all took place at the basement under Mongol Rally finish line bar. A young Mongolian girl sat in a make shift office with Mongol Rally gear such as mechanic’s tools, camping stoves, backpacks, and rolls duck tape strewn about. When it was all done, Lillie took the German license plates and headed off to explore the Mongolian countryside with Peter from Divine Fiat.

The team had dissolved almost as quickly and spontaneously as it had come together. It was time for me to leave as well. I walked down to the train station that the waitress at Amsterdam Cafe insisted was too far away to reach by foot, hopped on the #5 Russia bound train, and bade farewell to Ulanbataar. 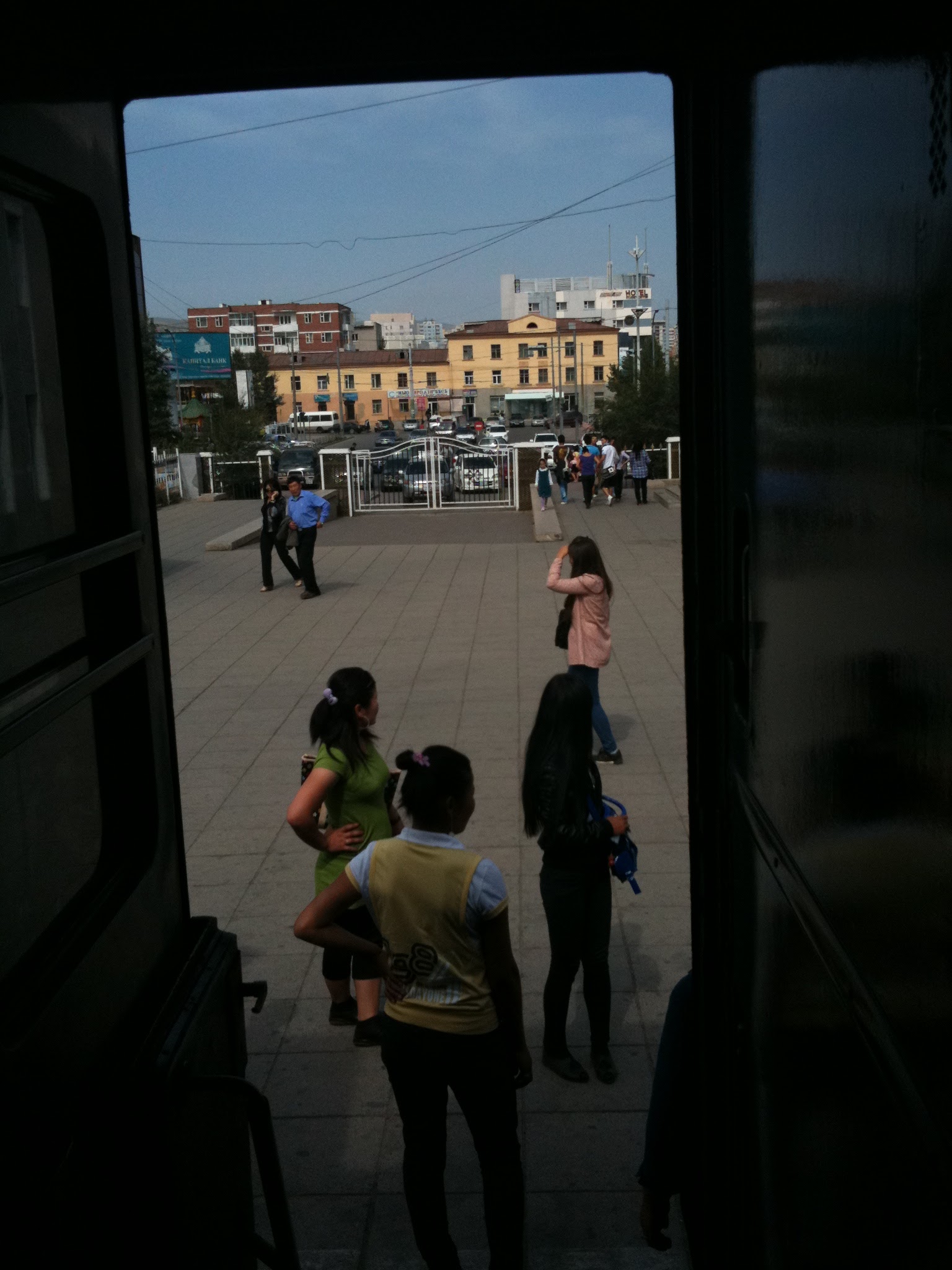