Visiting a fencing club requires simultaneous conditions to be met.

Unsurprisingly, these conditions rarely converged on a road trip like ours. Nine times out of ten, either the website listed outdated information, or their practice schedule didn’t line up with our stay. Regardless, we continued to try. Our second fencing club was to San Jose, Costa Rica.

Like in Guatemala, the fencing space was located at a large state funded sports complex, but unlike Guatemala, the facility wasn’t half-complete. Costa Rica’s reputed high living standards shone. The surrounding city park was well designed and well maintained. Green lawns, trees and water fountains created a relaxing and welcoming atmosphere. The fencing center occupied the second floor in the building next to the all-important National Football Stadium. We were optimistic that we wouldn’t have to fence on dusty concrete again.

One week earlier, Guatemala introduced us to the most basic training facility any of us had ever seen. San Jose fencing club was on the opposite side of the spectrum. The ceilings were high, the strips were grounded, and pistes had plenty of clearance in all directions. The layout was familiar: one wall for the entrance/exit, one wall for storage lockers, one wall for fencing dummies, one wall for seating. This was without a doubt an impressive fencing club by any standard. 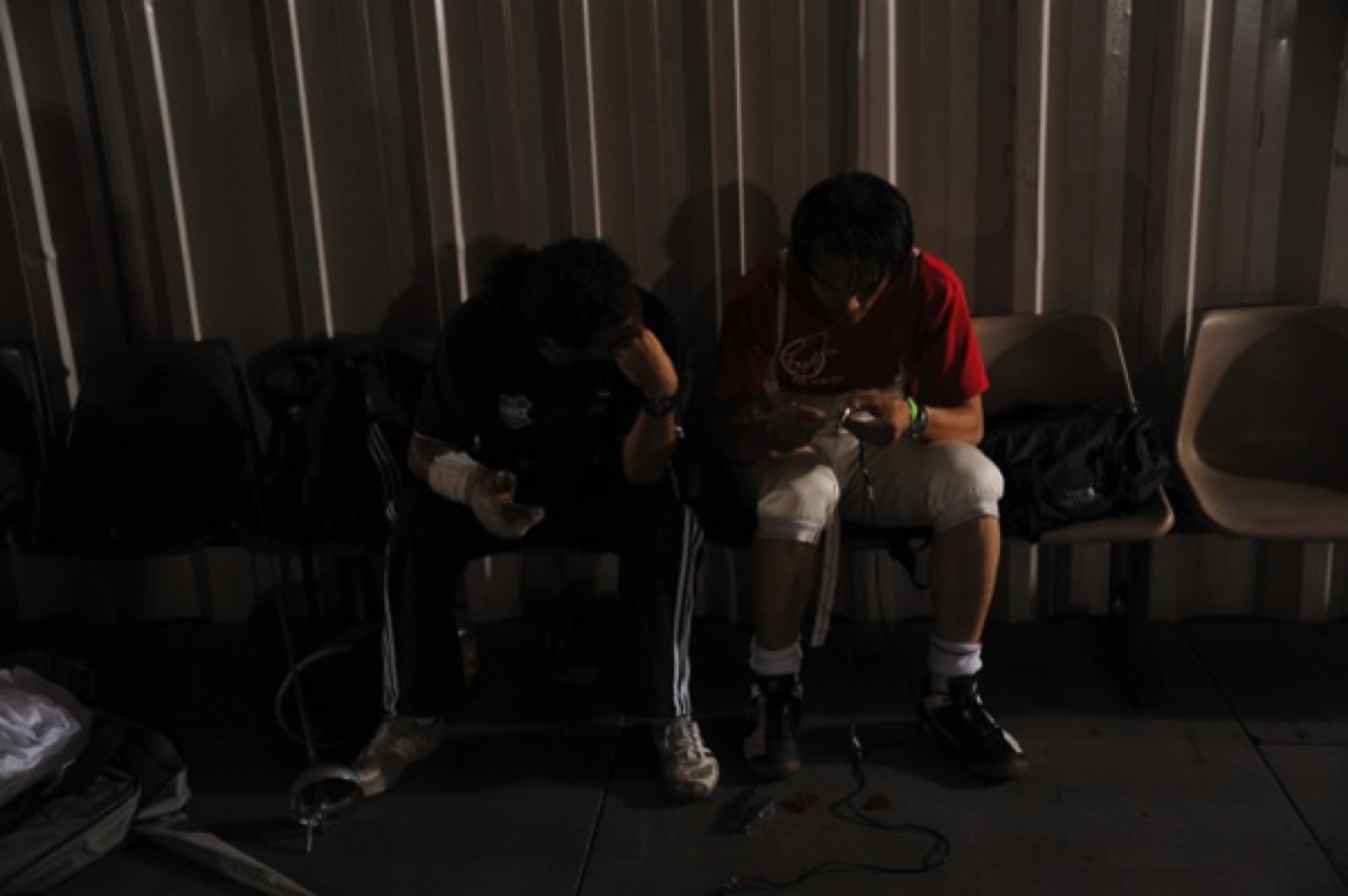 We waltzed in about an hour after the scheduled foil/saber practice time. At first, no one paid any attention to us. Foil fencers stomped on the strips at the far end while saber fencers clacked away on the nearer strip. We stood around appreciating the awesome space until Martha introduced us to Fabian, the contact person with whom she had spoken earlier that day by phone. As he welcomed us, the fencers in the room slowly began noticing our presence, casting curious glances our way. We all pretended not to notice. 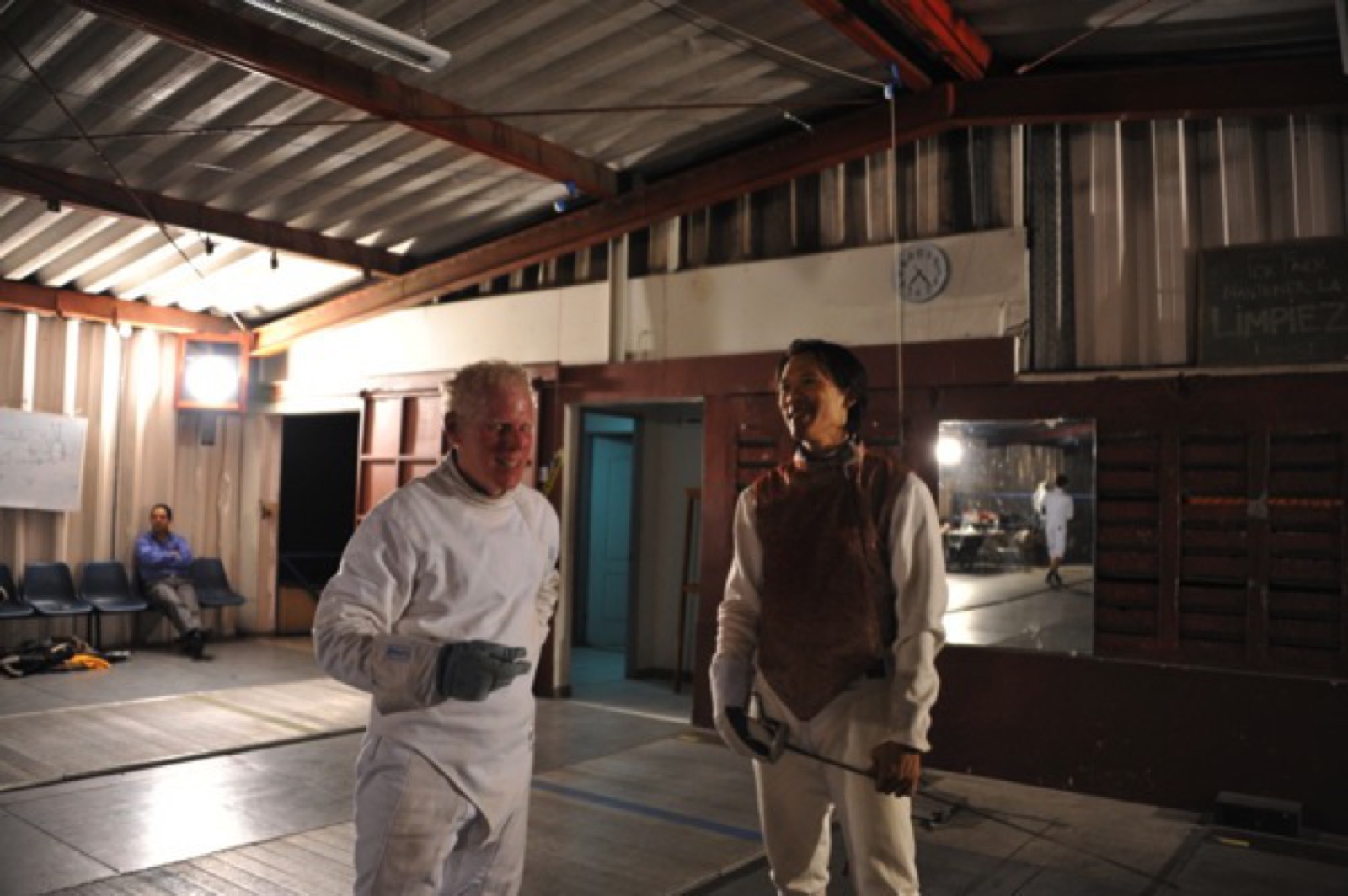 To me, the foil fencers all appeared to be novices. Judging from their posture, footwork, and bladework, I estimated at most three years of experience from each fencer. I wasn’t particularly impressed with their level, but Martha did anticipate a challenge, it was enough for Martha. Having been on the road for two months, she knew that winning on technique and physical conditioning wasn’t going to happen. She needed to fence smart, something she rarely does. 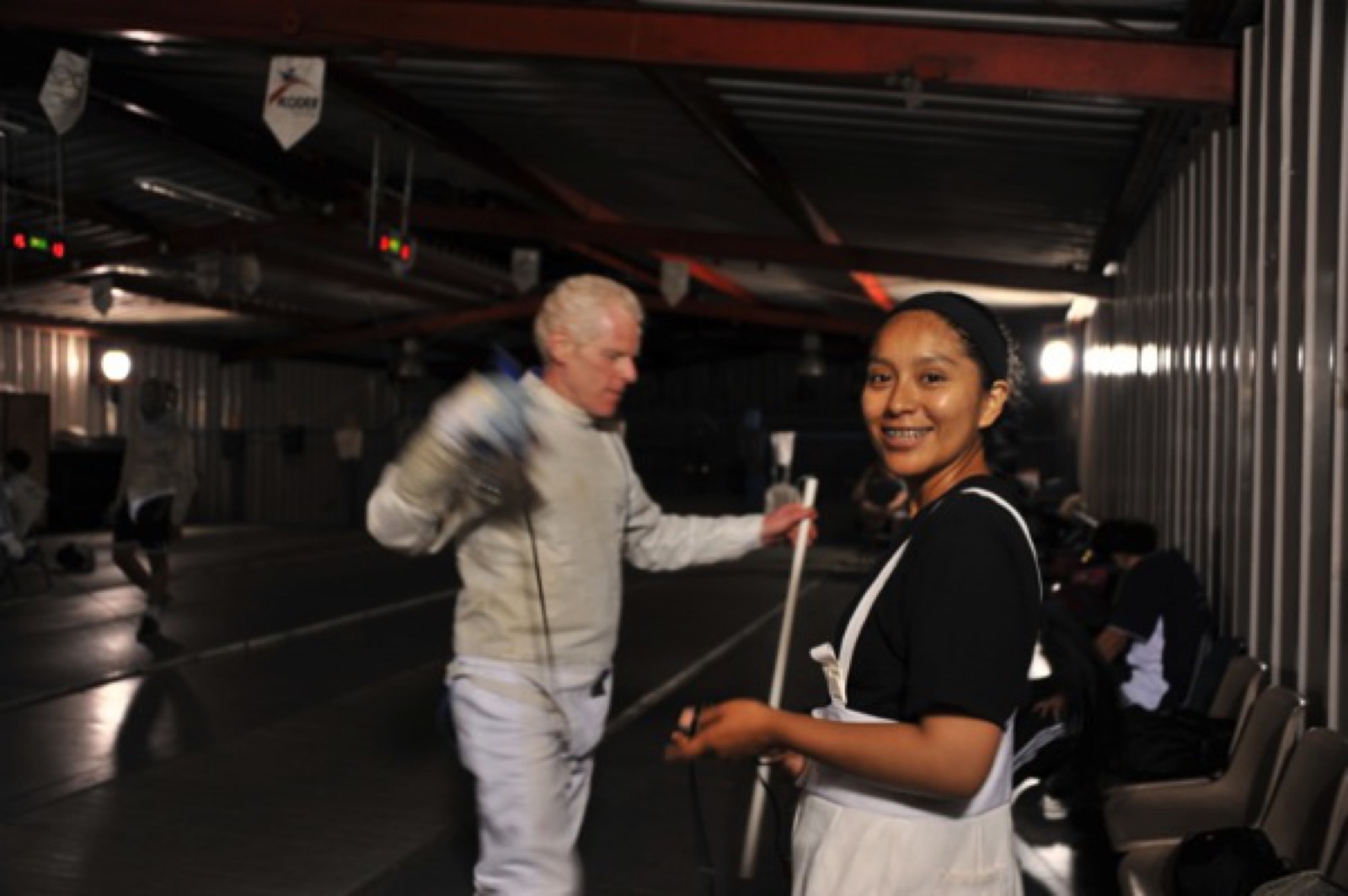 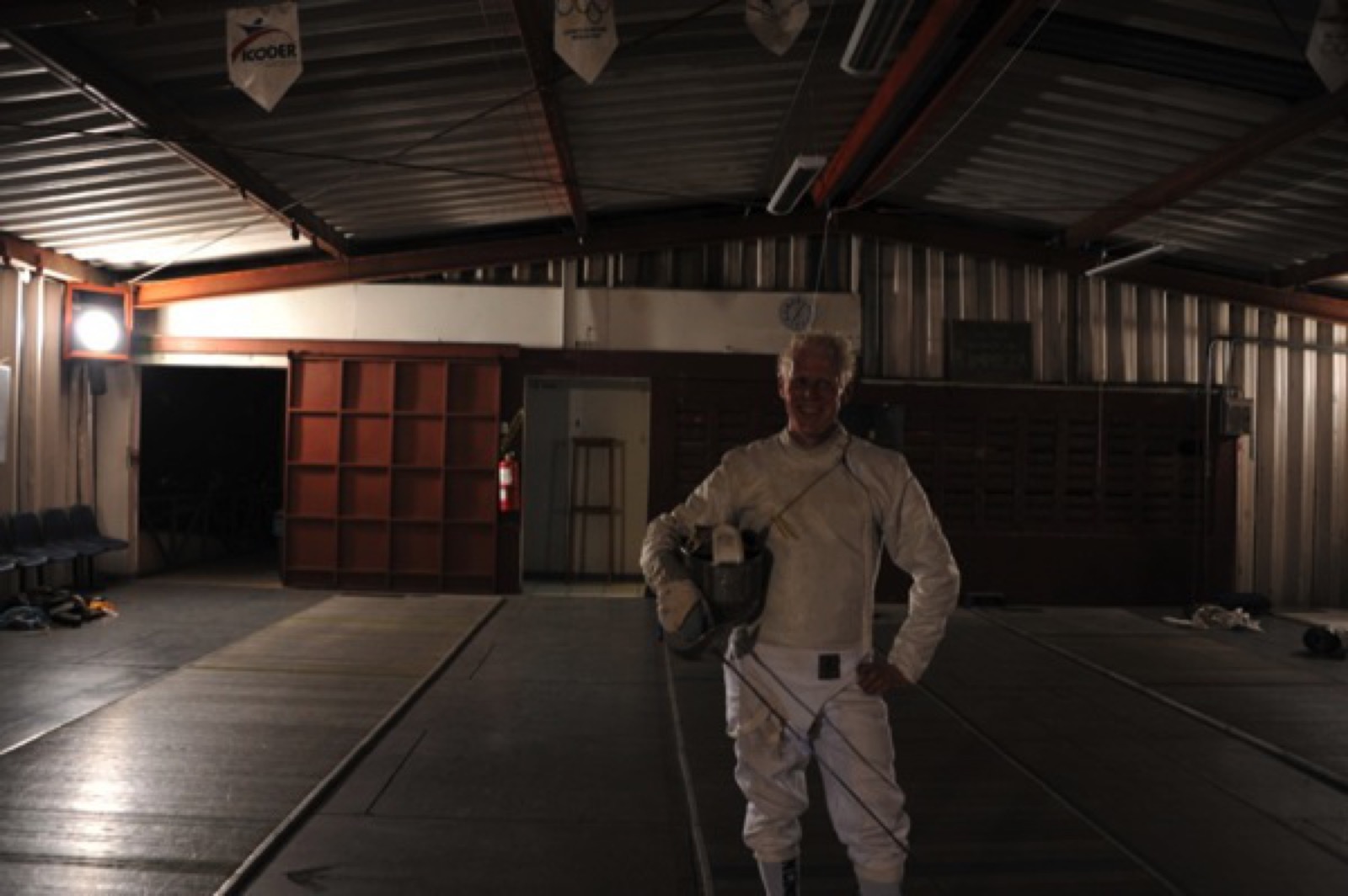 Paul had no business with novice foil fencers. Instead, Paul eyed the two young, fast moving saber fencers on the near strip. Paul was completely unfazed by their youthful energy. After defeating everything that Antigua threw at him, he was pretty confident that Central American teenage fencers had nothing on him. The epee fencers were another story. Paul could tell that they were experienced from the way they warmed up with stretching, footwork, and blade work. Their ages hovered around 25, and they didn’t look like opponents easily defeated based purely on experience. 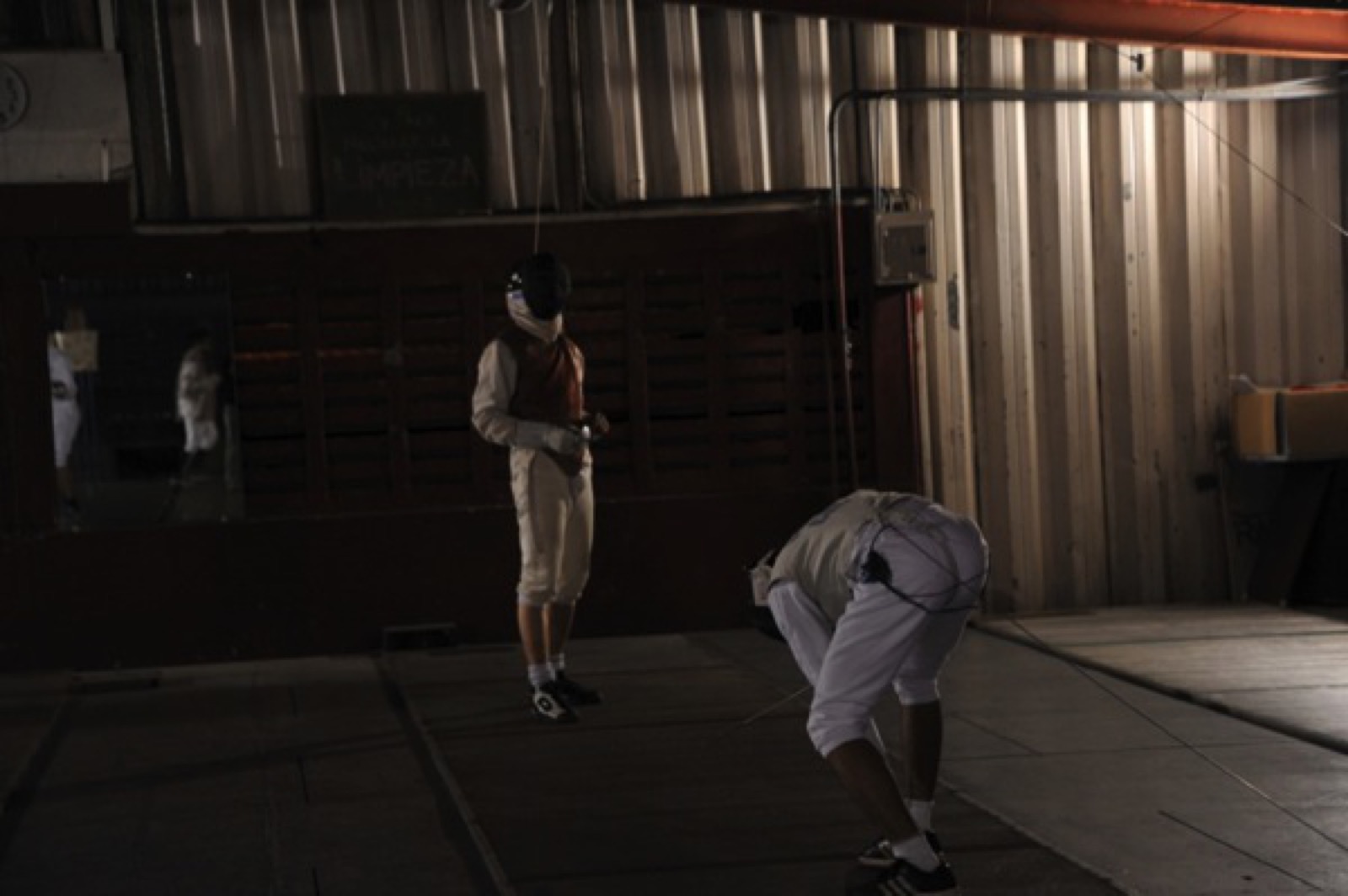 I don’t remember my first opponent’s name. But I do remember his dead-pan eyes full of teenage indifference, and his mom-styled bowl haircut. Our bout started slowly. He danced around a safe distance while I kept my guard up. My first move was an off-target double advance lunge. He easily moved out of distance as I grazed his arm. 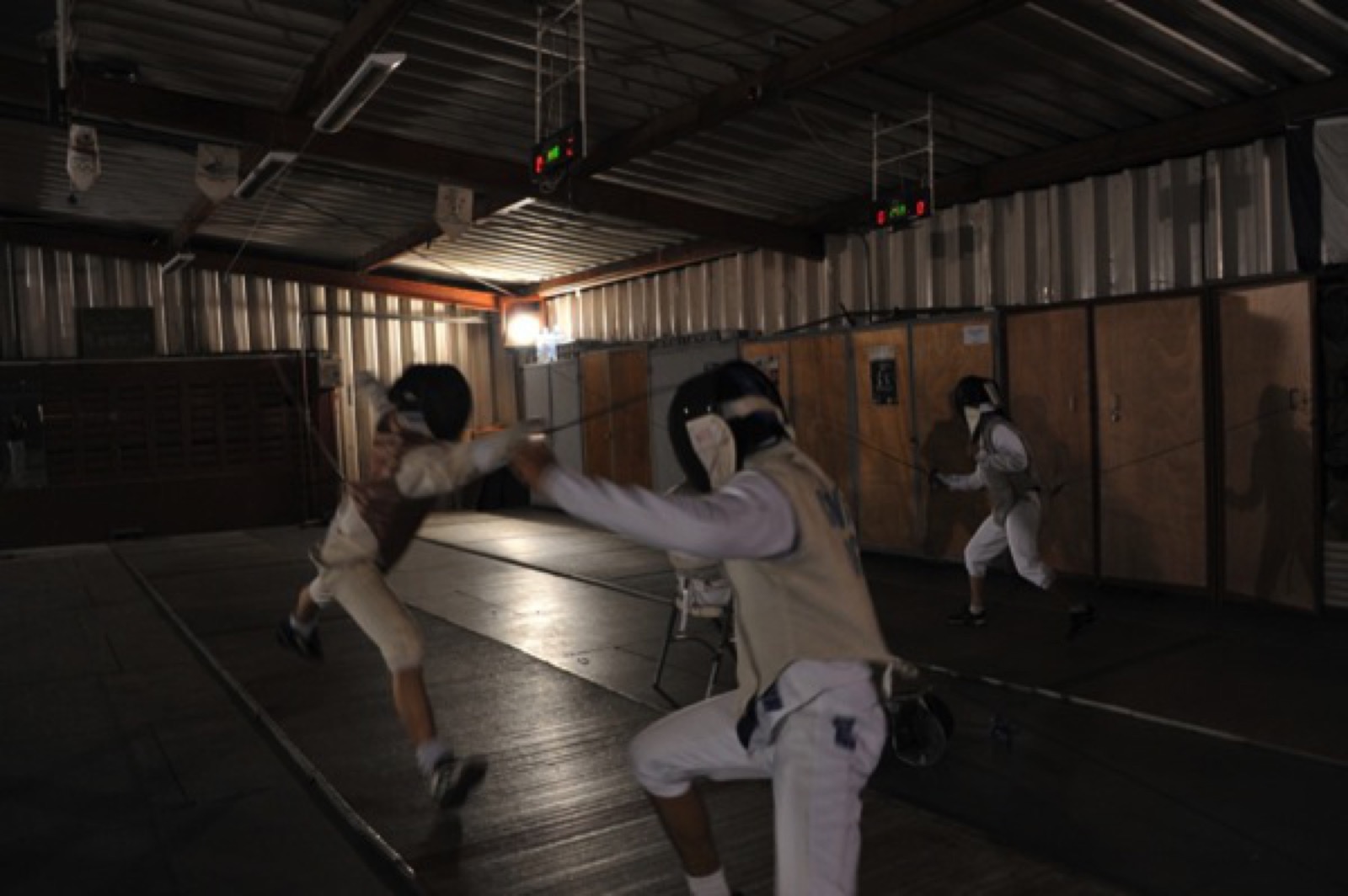 He initiated the second action with several fast steps of preparation. Caught off guard, I stepped in and stood up with a poorly-timed, off-position counterattack. Not only did I fail to close him out, I completely missed the target. Had his preparation not been so wide, he definitely would have caught my defenseless opening. Instead, he missed and I caught a lucky touch in the messy flurry of infighting that ensued. 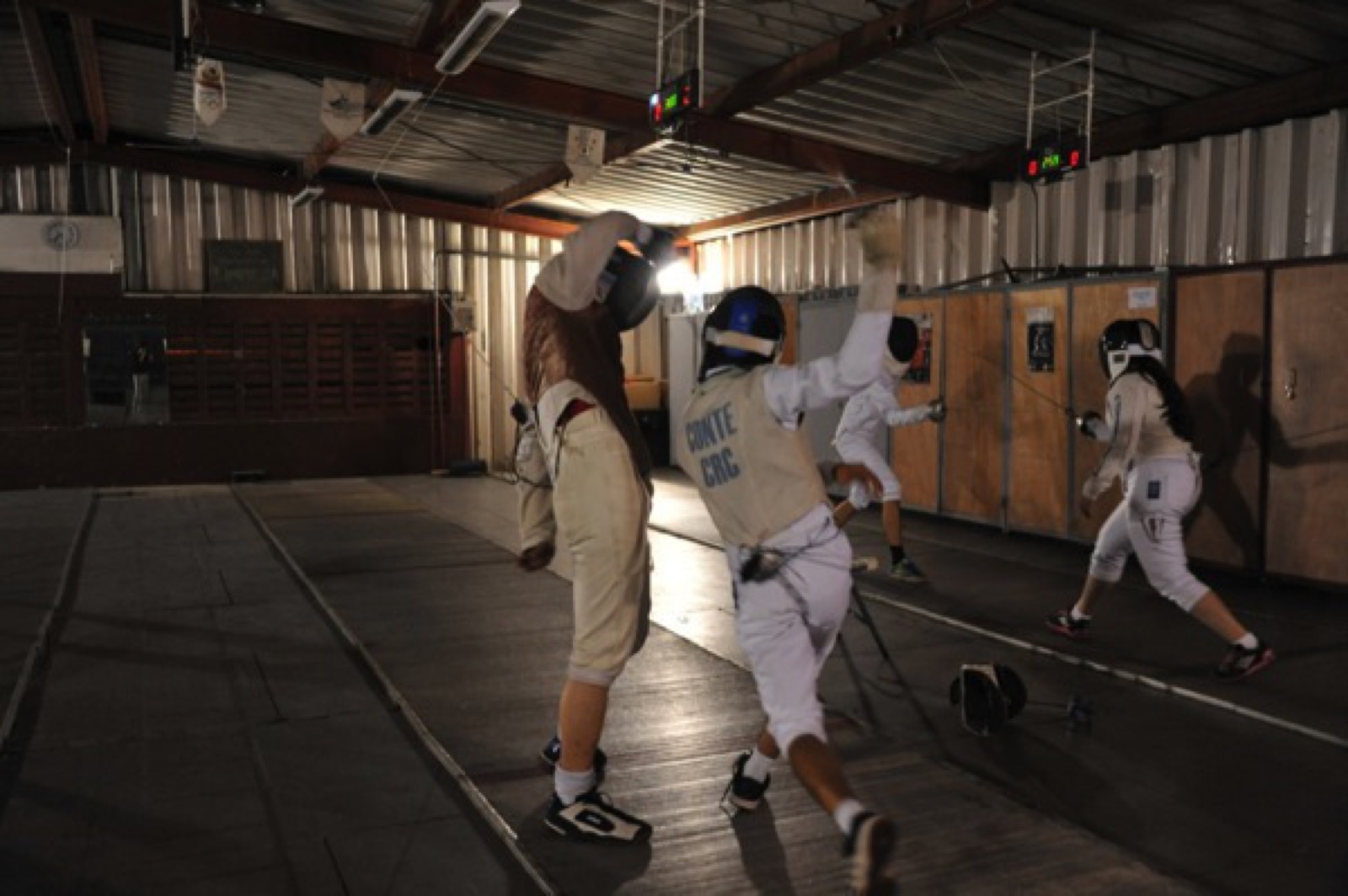 The rest of the bout was as ugly as that first touch. While his defensive maneuvering made him a difficult target, his habit of pulling his arm back threw away all defensive initiative he managed to gain. I won 5-3. 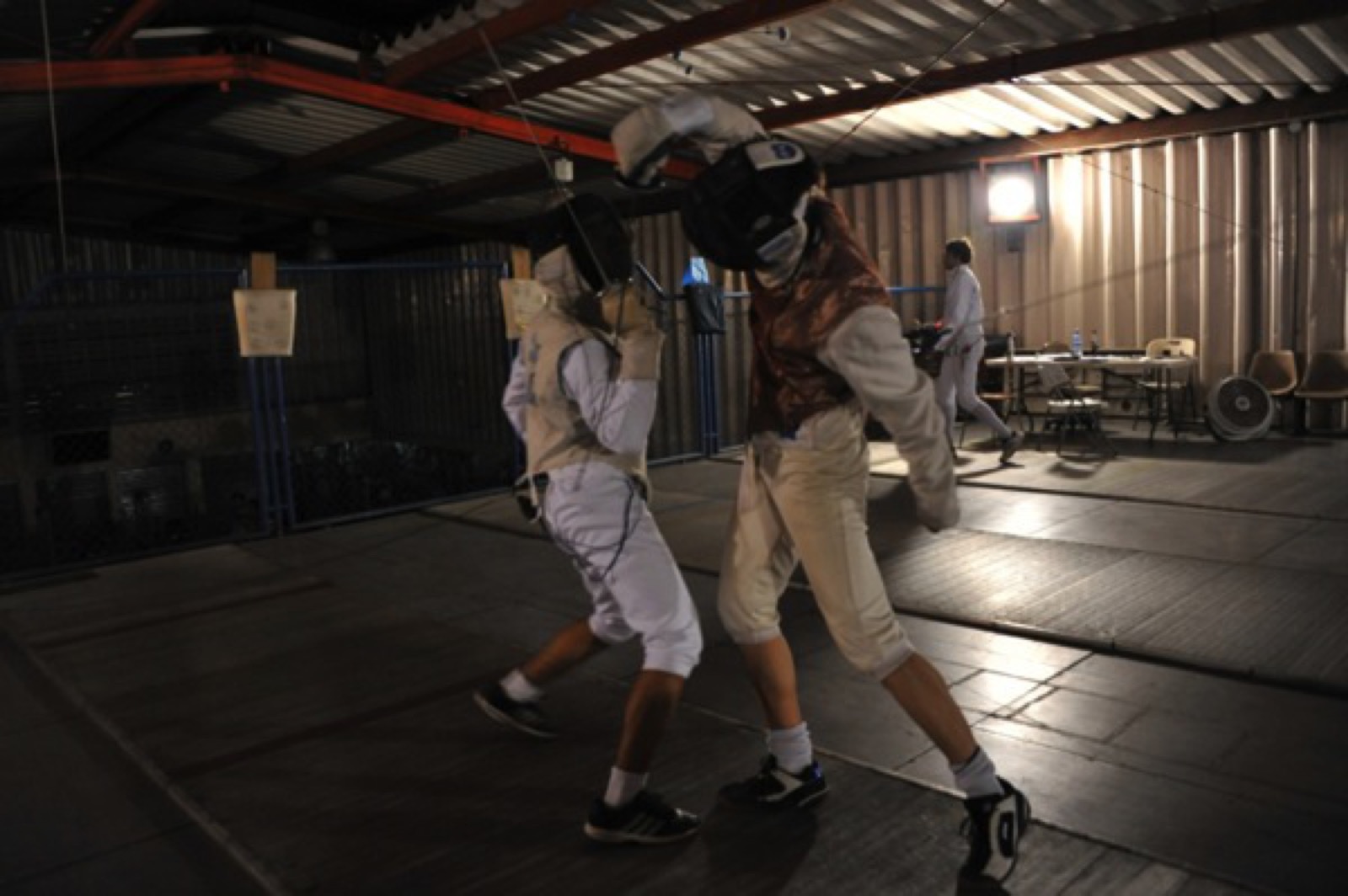 The following opponents were all much weaker. The second fencer’s footwork was always a tempo behind and his parries moment too late. He appeared utterly confused when when I easily blew through his defense and defeated him 5-0. The third fencer didn’t fare any better. Every time she panicked, she counted on her super move that combined attack, counterattack and parry. She too lost 5-0. 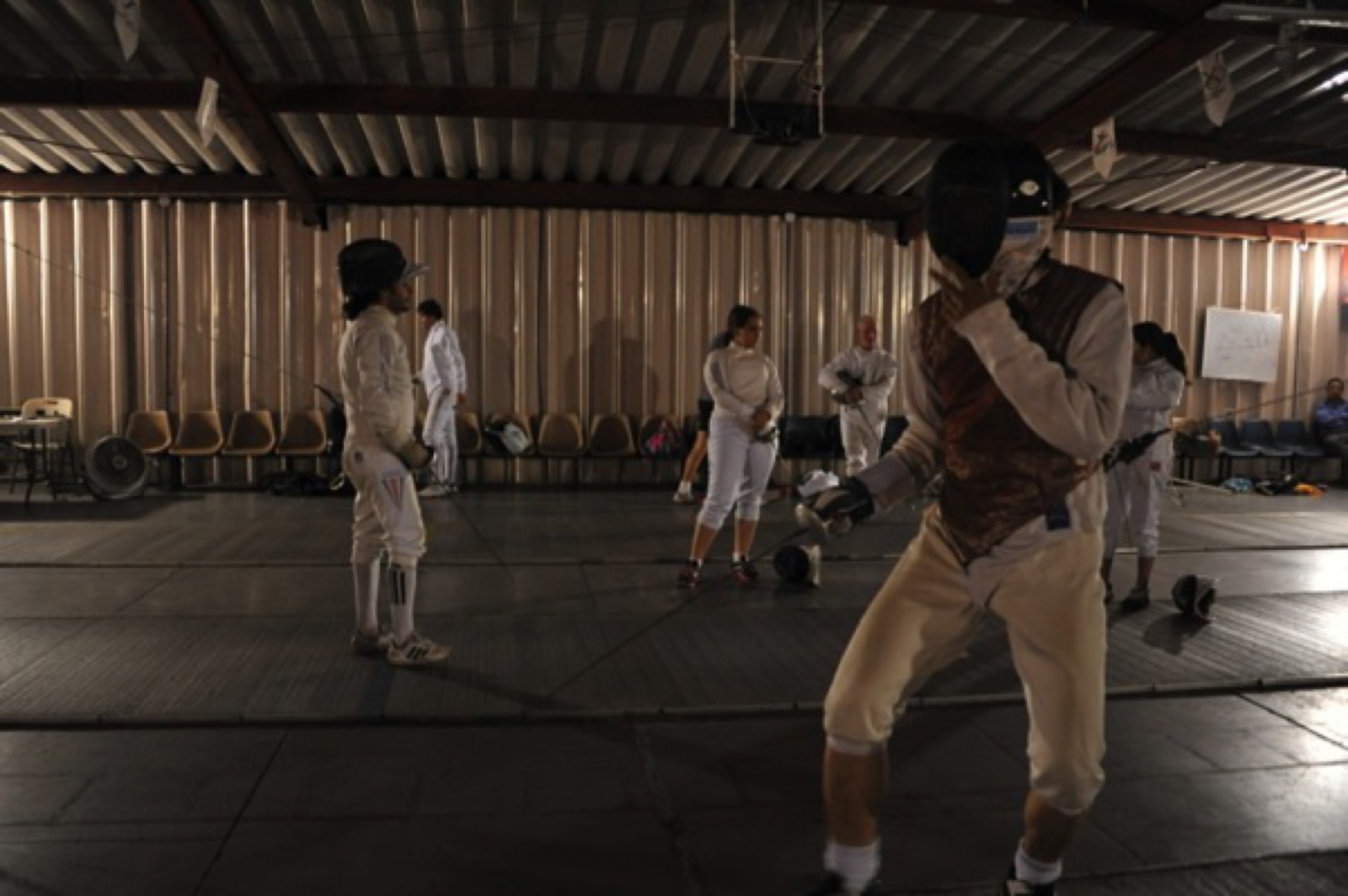 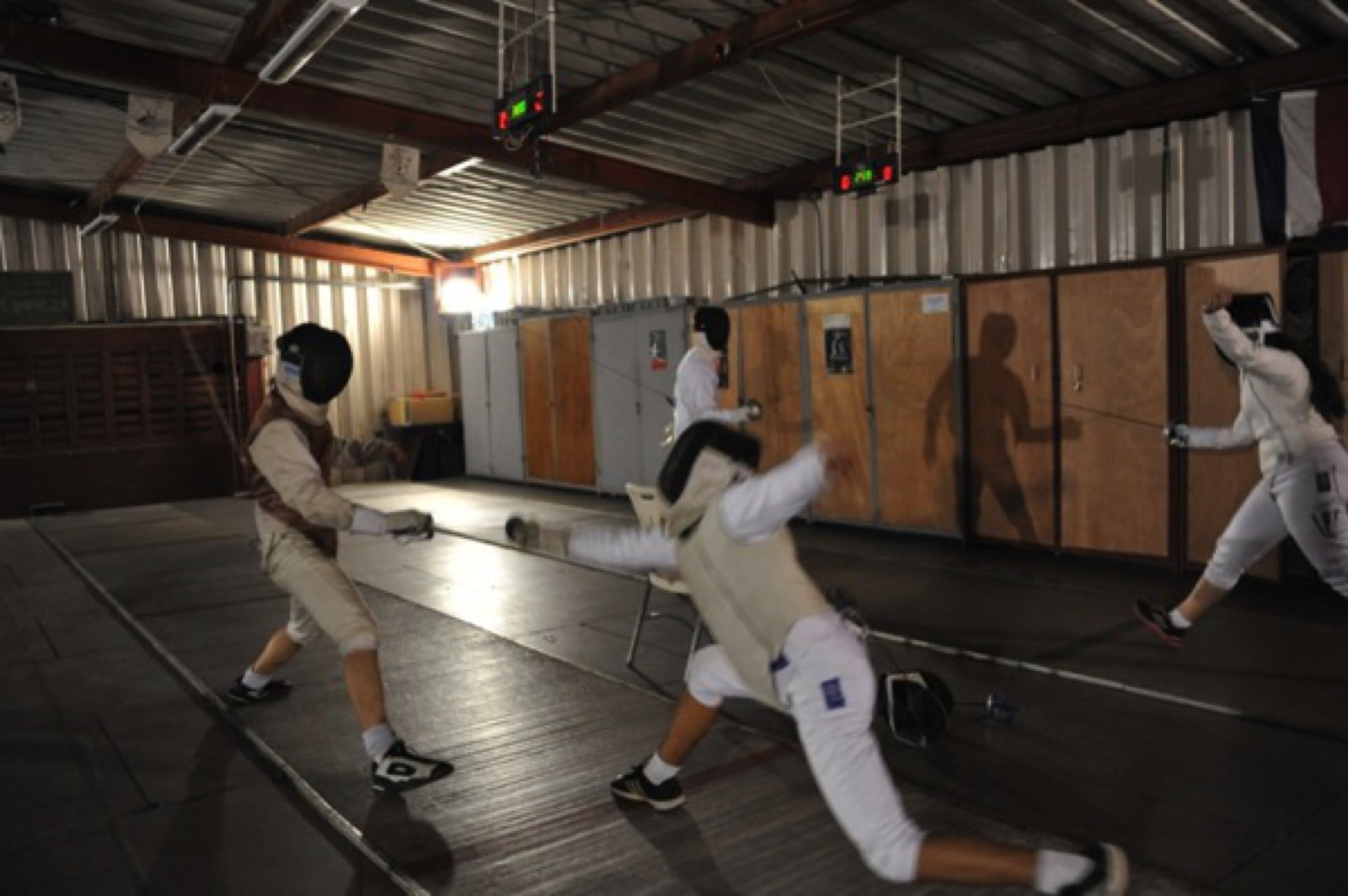 By the time my third opponent stepped off the strip, Paul had added another victory to his winning streak, and sent his first opponent packing. 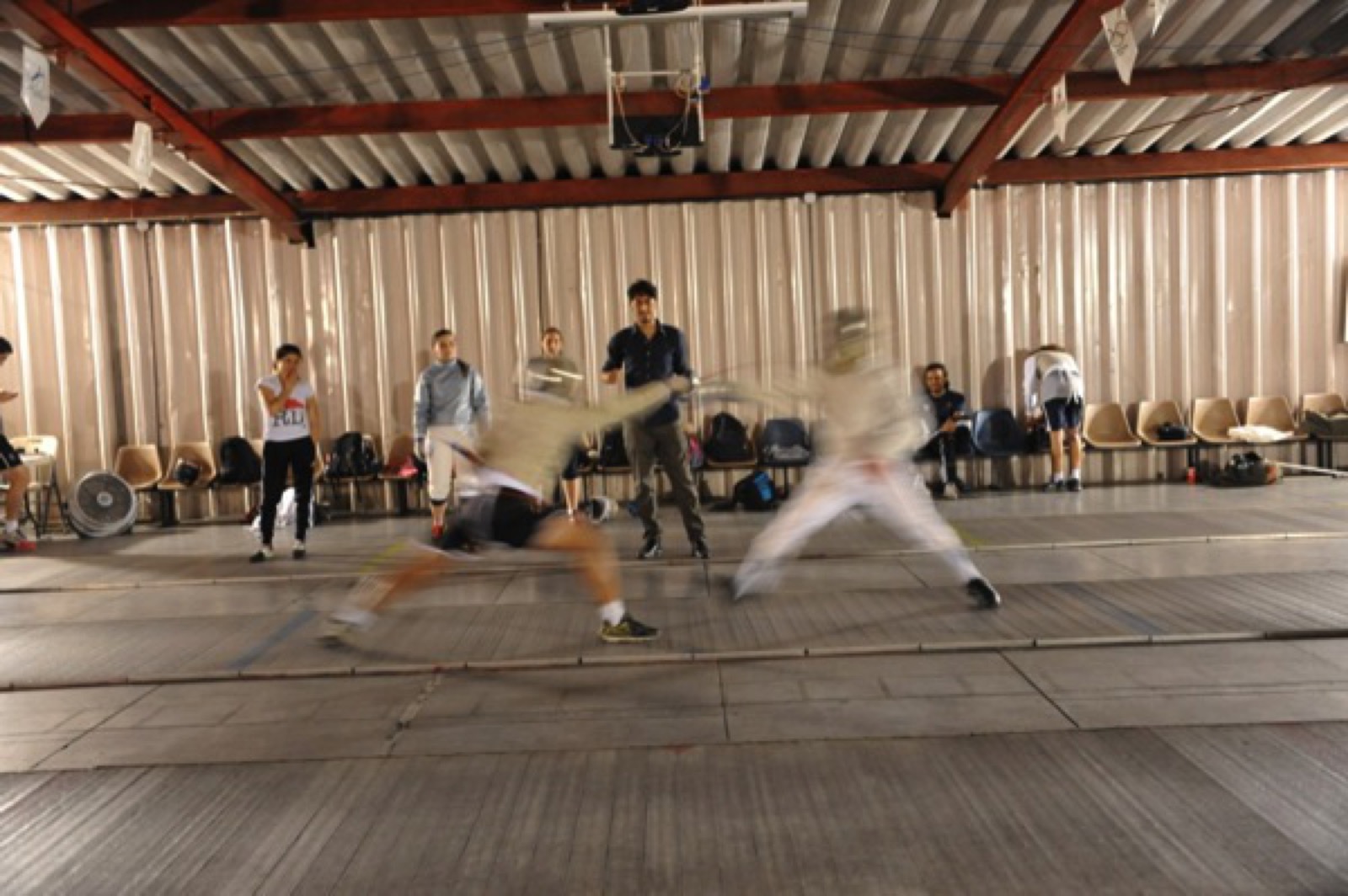 With the only two remaining saber fencers on the strip, Paul ended up pulling the worst possible candidate to direct the saber bout - an epee fencer. The poor directing revealed itself quickly and the incorrectly called touches against Paul began to accumulate. As expected, the director had no clue how to call saber attacks and preparation. Sadly, the Costa Rican epee fencer put a stop to Paul’s streak of victories in a 15-14 bout on a bad call. 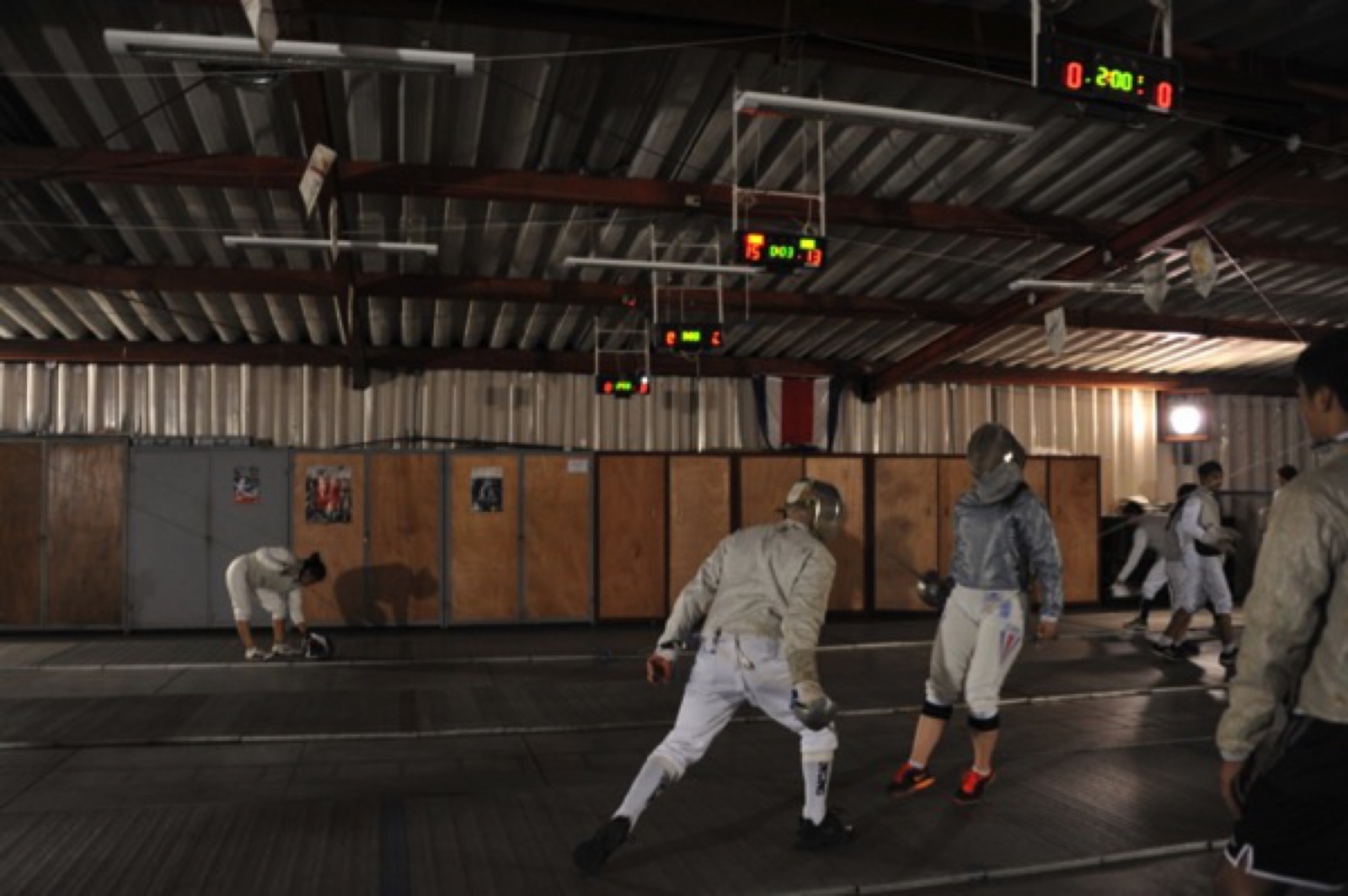 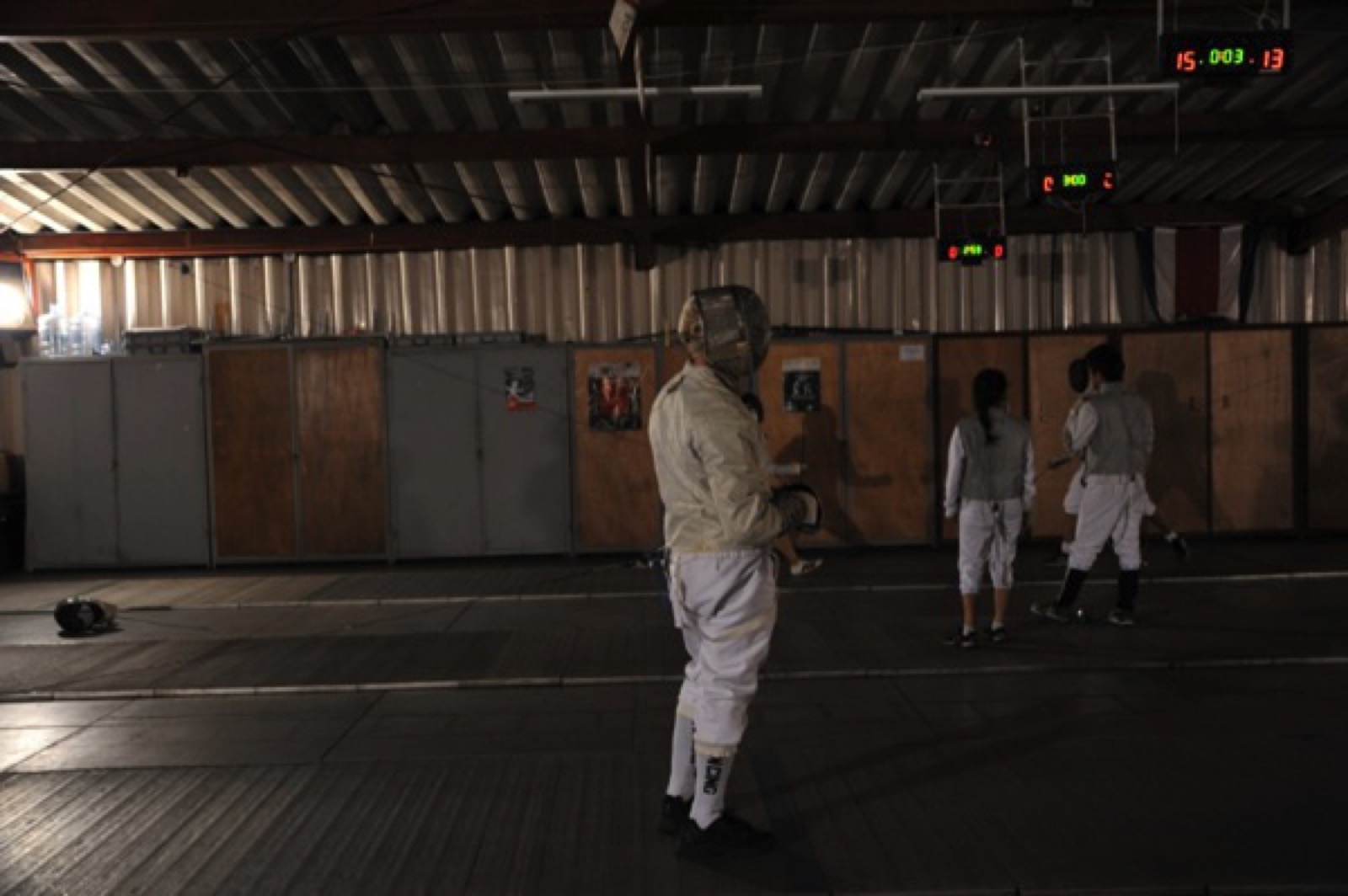 Despite arming herself with the lucky Rosenthal lame and foil, Martha wasn’t able to overcome the height, speed and strength difference against the dark haired Costa Rican. She lost decisively 5-0. 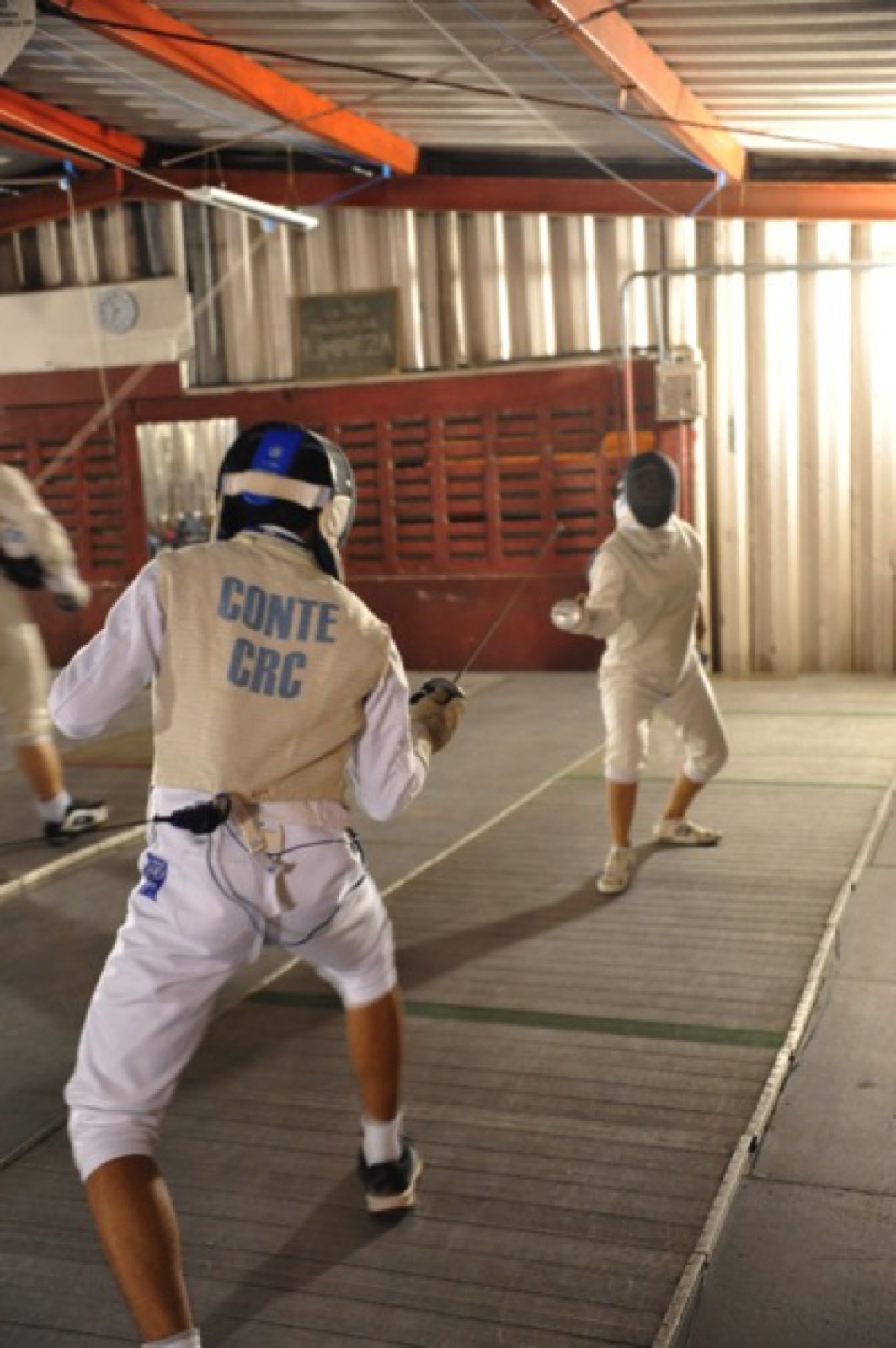 Martha was more evenly matched against her second opponent. She started the bout with a passive defense, while her opponent attacked indiscriminately with an arm-back advance lunge. The attack was effectively a feint-remise attack. Martha reacted to each feint by freezing in place, leaning back, and swinging her blade wildly for the parry. Martha’s opponent found an easy opening through Martha’s parries in the remise over and over again. At 9-0, Martha realized that sticking to parries and counter attacks wasn’t going to work. Finally, she bravely stepped out of her comfort zone and revealed her own arm-back attack. Surprisingly, her opponent reacted the same way - freezing in place and swinging her blade around for the parry. It must be a Latin America thing.  Anyway, Martha managed to turn the bout around and won 15-10. 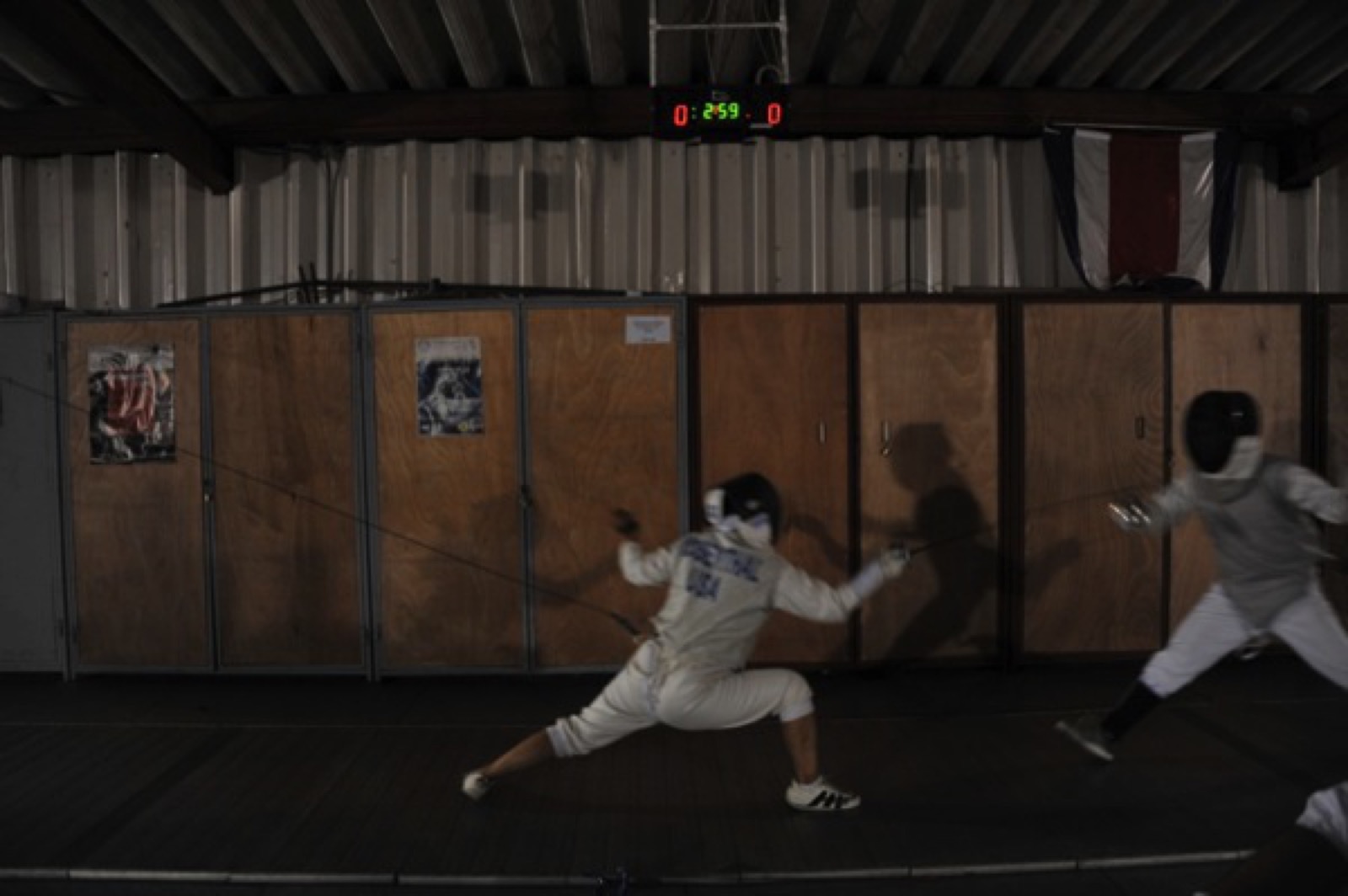 When Paul put down his saber, and switched over to epee, I imagine all the epee fencers in the room were surprised. They couldn’t have anticipated our most veteran fencer to be our most versatile. Even more surprising, Paul managed only one defeat in the first round of fencing. 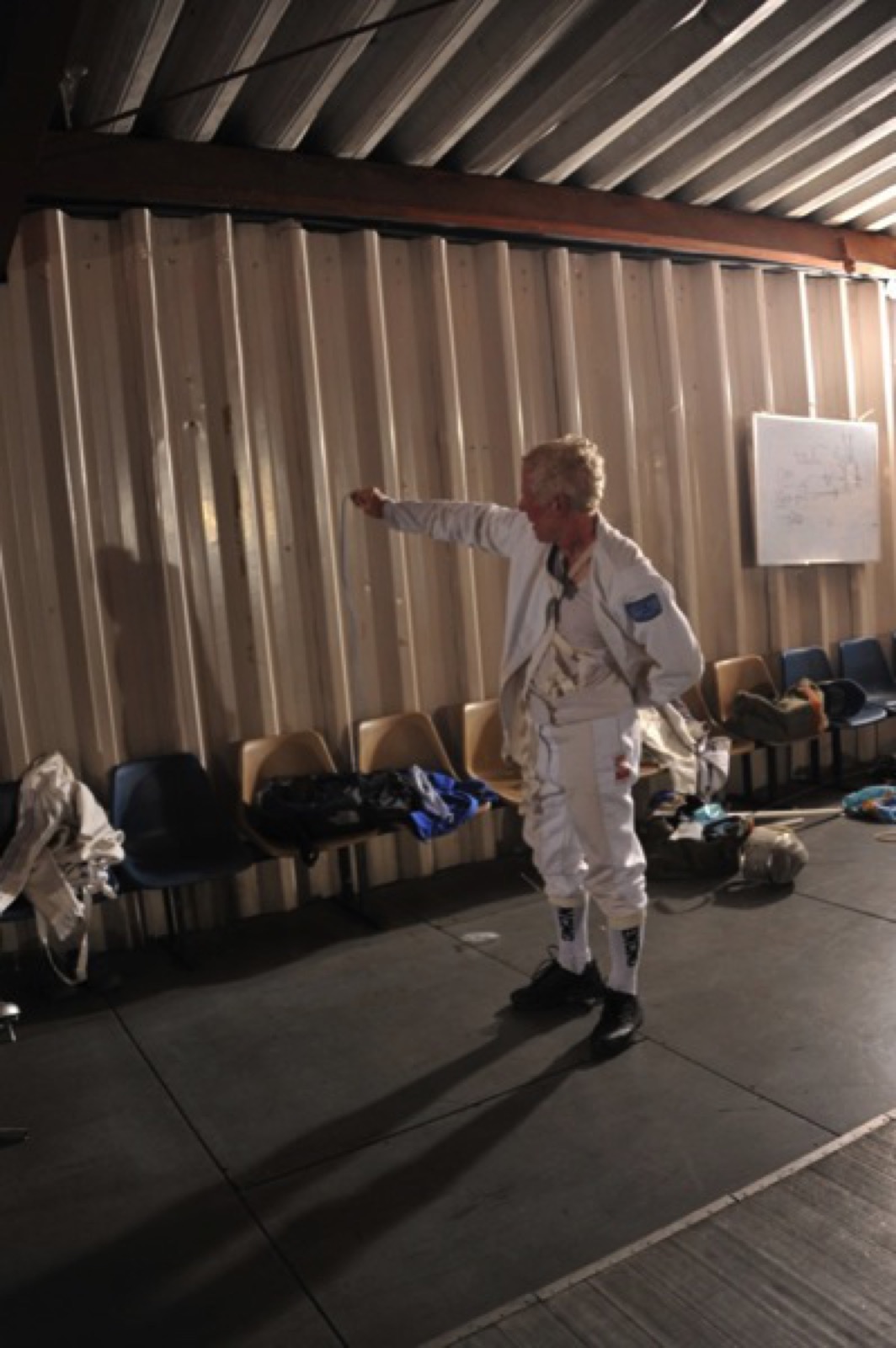 For the record, Paul was also surprised. Paul expected defeat in the face of these experienced looking fencers. Instead, the only person he lost to was Jorge. Rather than accept that Jorge was the strongest fencer in the room, Paul coolly collected himself and began planning a strategy for the rematch straight away. First, Paul told himself not be fooled by Jorge’s ability to launch a quick attack from a seemingly off guard position. Secondly, Paul noticed that while Jorge’s defense was really strong for the upper portion of his body, but he didn’t seem to pay much attention to the lower half. In Paul’s rematch, Paul keep better distance, strategically targeting the underside of Jorge’s forearm, and won. Jorge clearly underestimated Paul, because Jorge didn’t have the sense to notice the tactic change. Jorge challenged Paul to a rematch to the rematch and lost again. 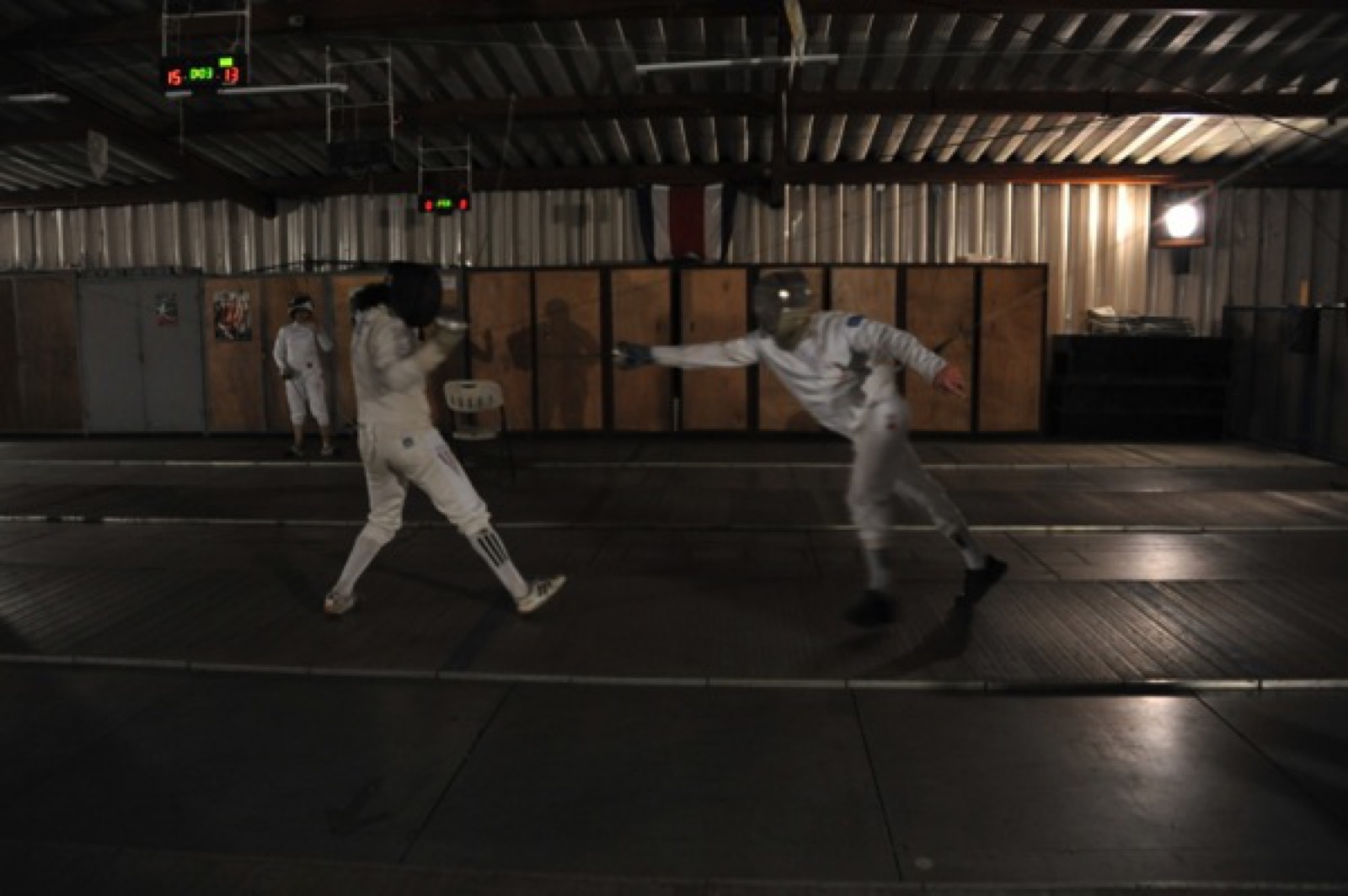 I fenced each foil fencers twice. The only exception was a short enthusiastic kid who was eager to continue fencing. He wasn’t very good, but since all the other foil fencers had left, I didn’t have any opponents. 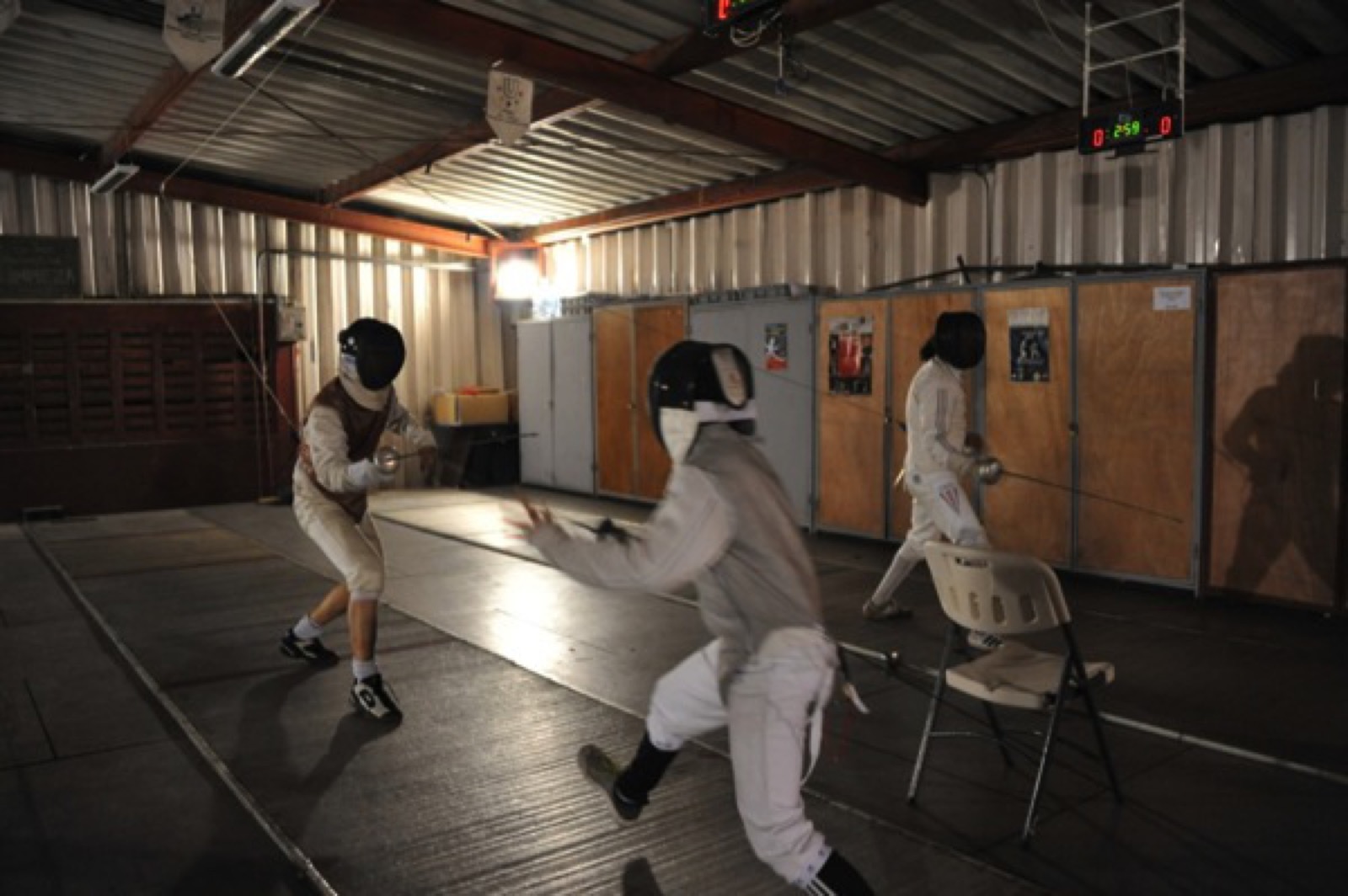 Martha, on the other hand, switched over to epee like she did back in Guatemala. Despite of spending most her bouts running away, over extending, and falling over, she managed to post a pretty strong showing with a couple victories. 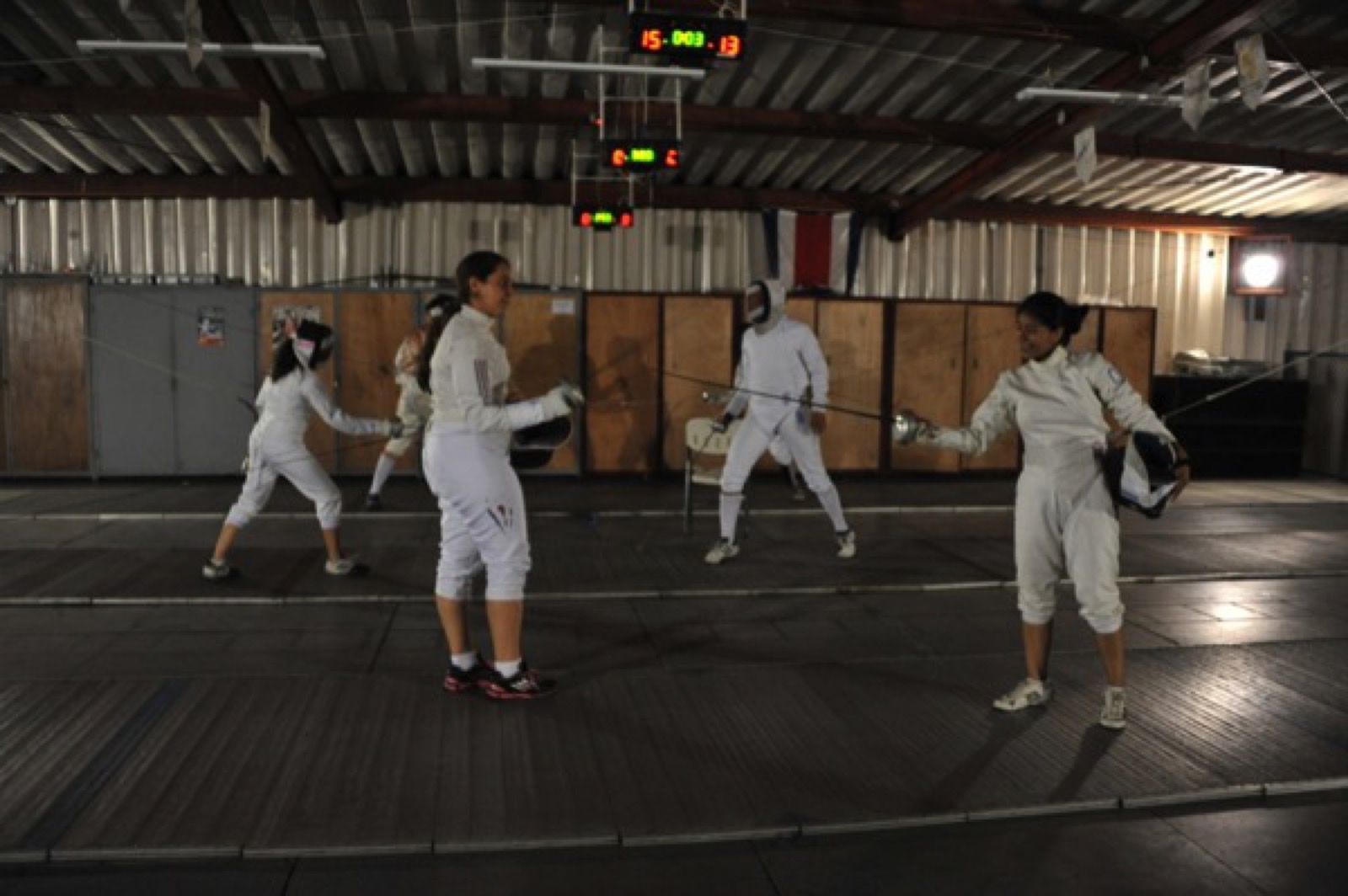 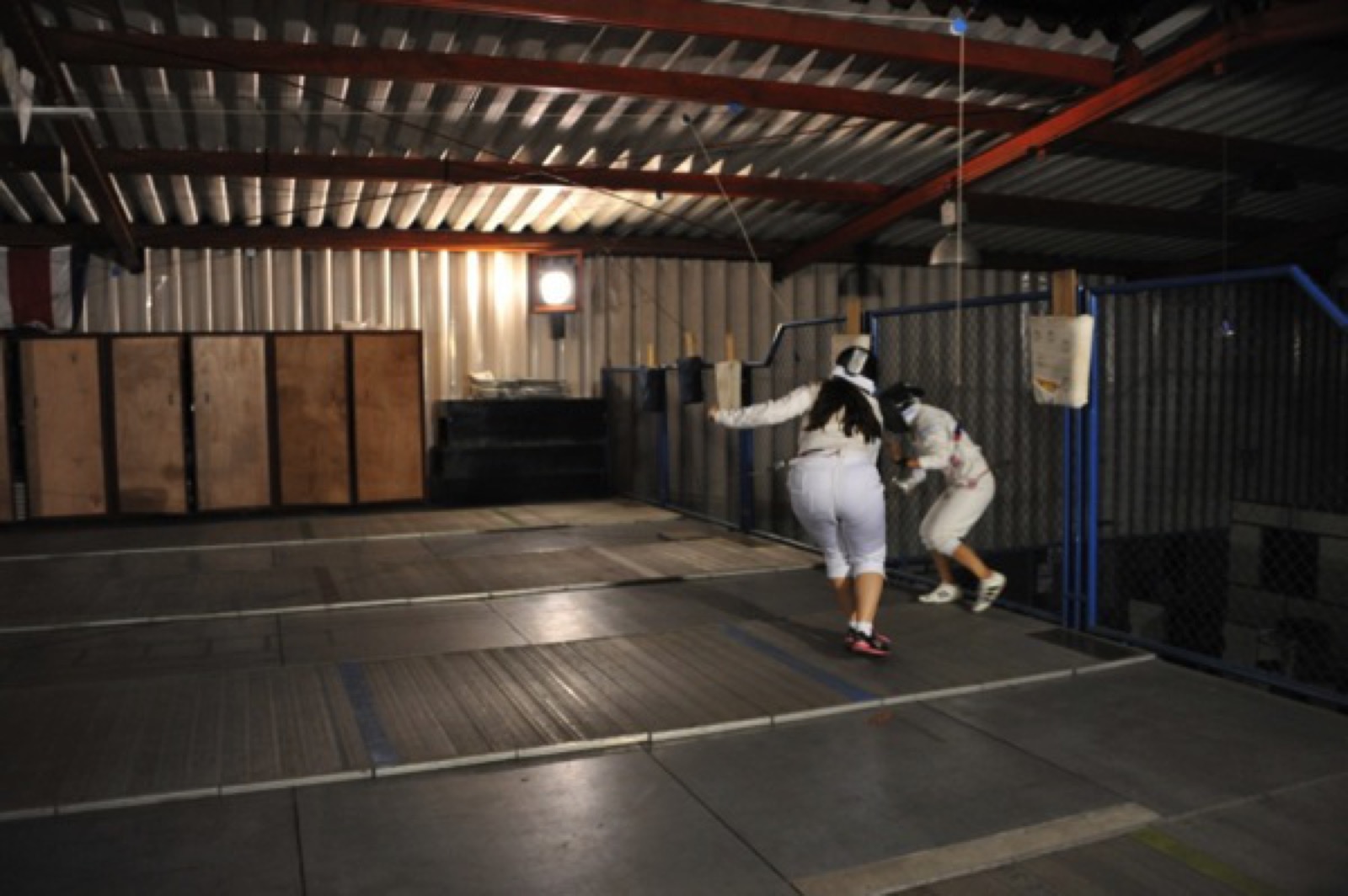 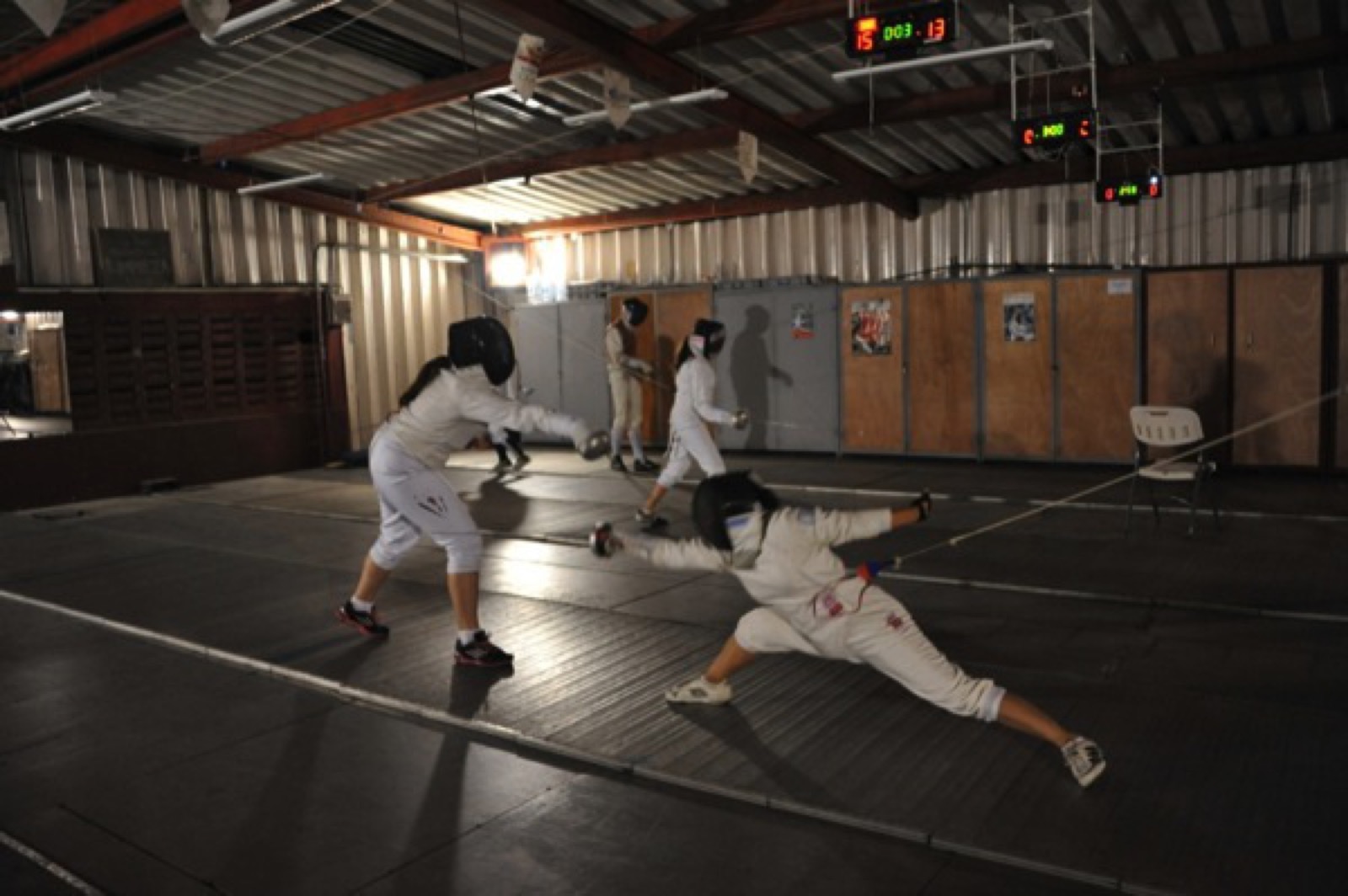 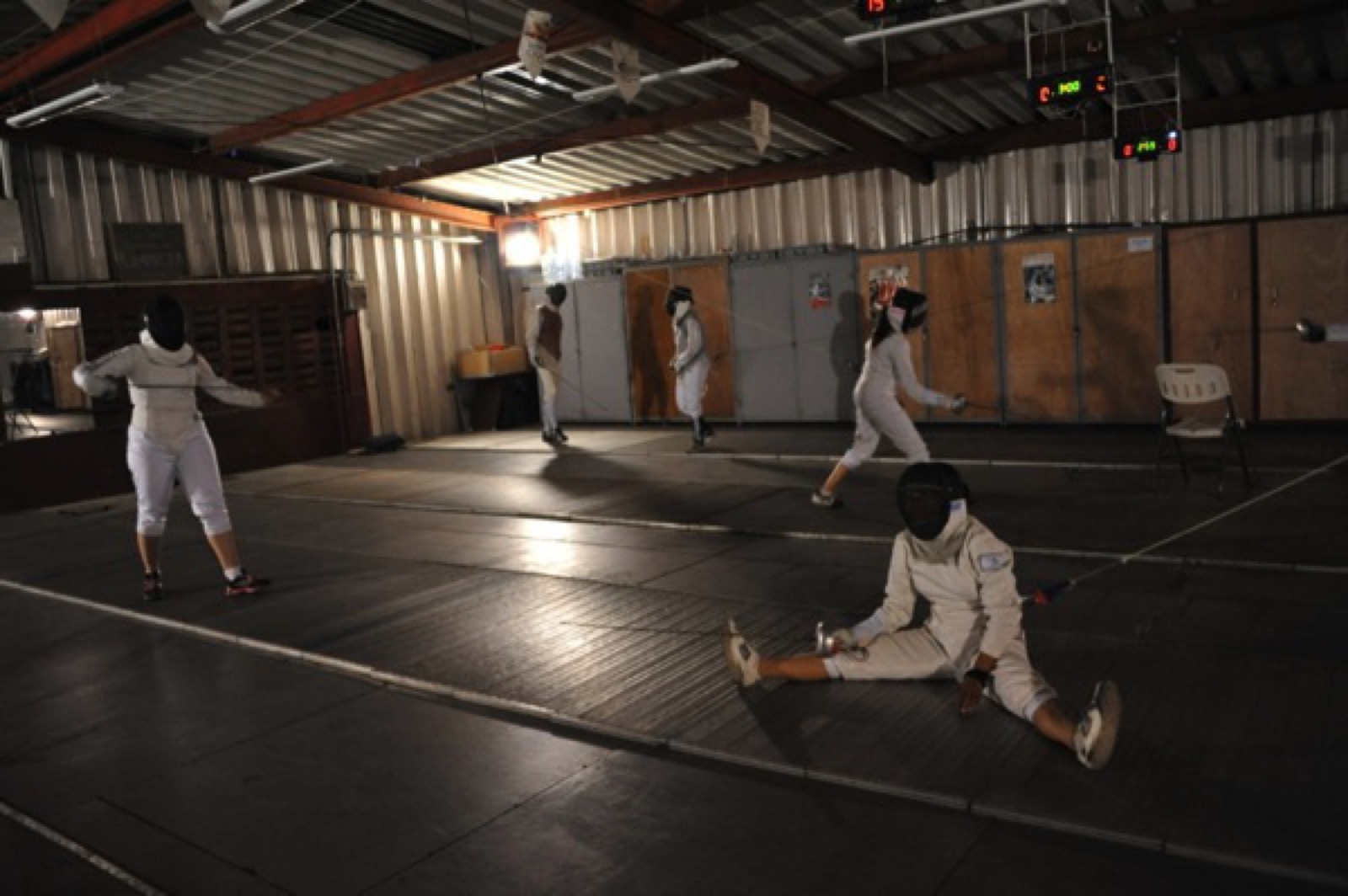 Paul’s cumulative record for the night was 10-2 for both saber and epee. Martha’s cumulative record was 3-4. Mine was 9-0. We had planned to stay only an hour but as you know, once you get going, it’s hard to stop, especially when local fencers were challenging us to rematches. By the time we left, we had stayed 3 hours and Paul was was screaming for some Central American Fanta to quench his thirst. 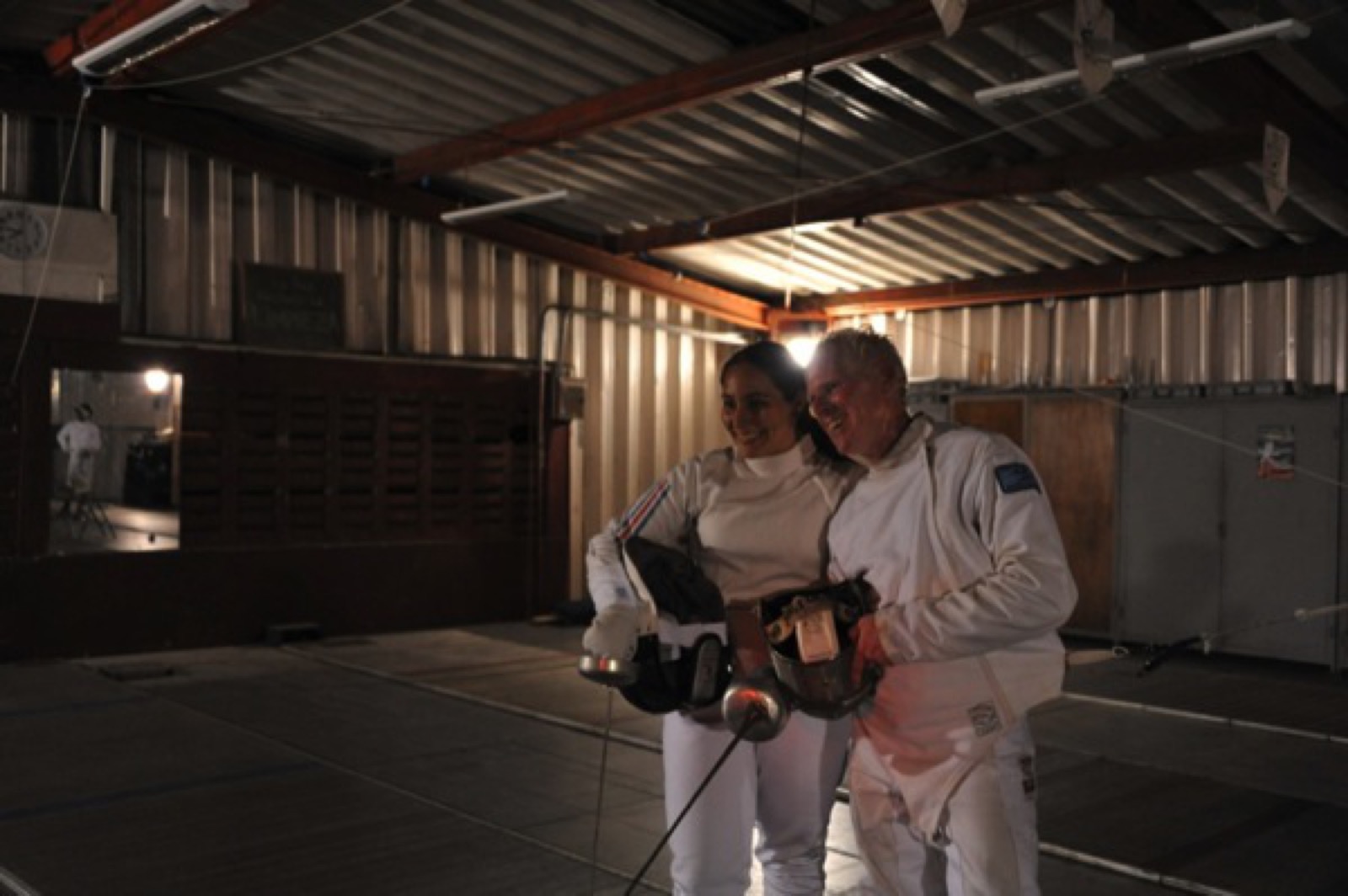 Toward the end of practice, the Costa Rican Federation President showed up and politely welcomed us. He explained that the training space was built on the generosity of donors and fund raising, and not by the government. Having worked hard to create this space, they were all justifiably proud of their club. We were really thankful to have been welcomed and accommodated they way we were. 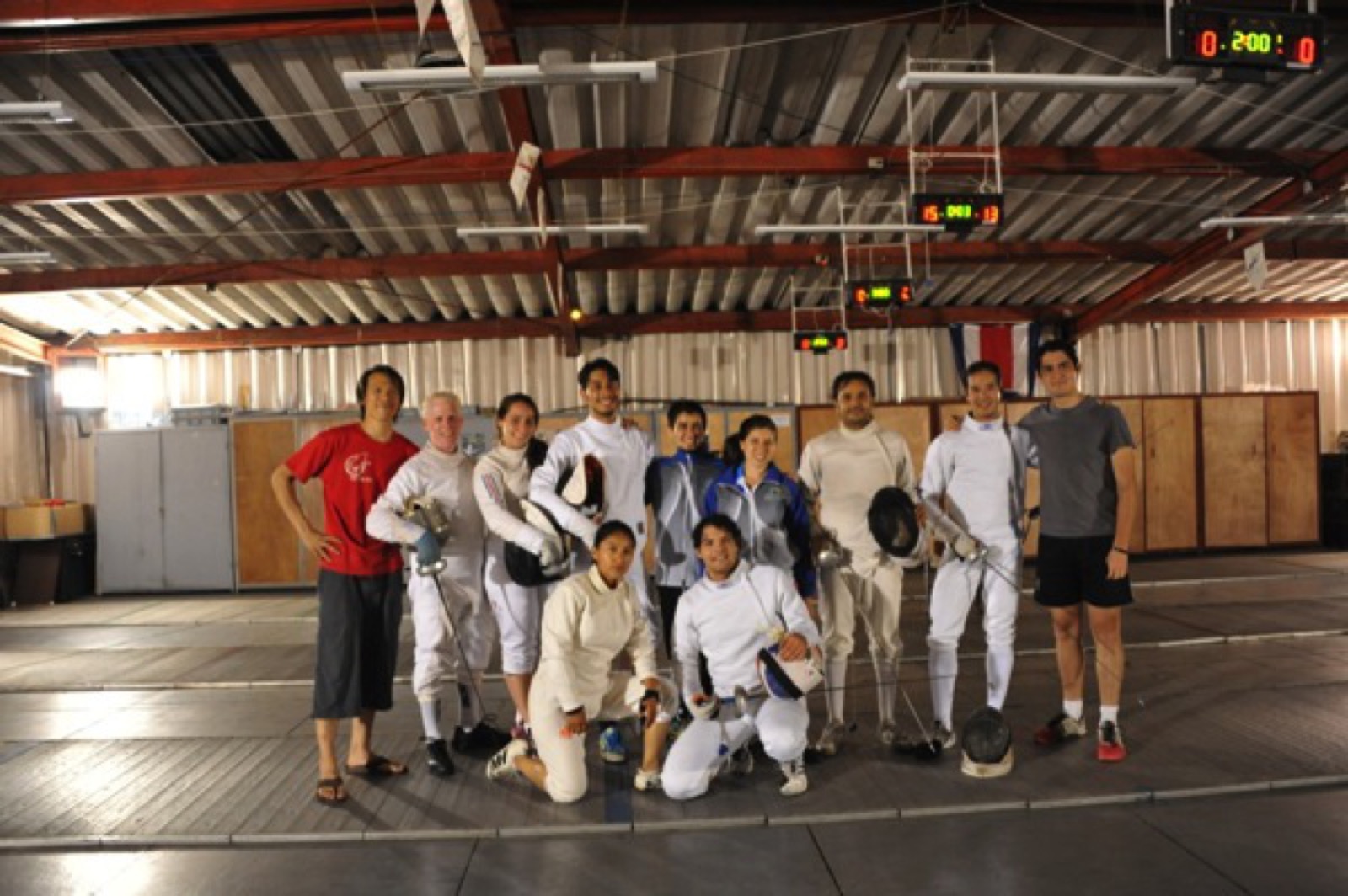 Based on our quick visit, I could tell their foil fencers had plenty of potential with their youth, athleticism and enthusiasm. What they lacked was experience and timing to catch the actions they tried. While they didn’t pose much of a challenge on that day, i’m sure the story would be different in a couple years. Paul described the epee fencers to be technically and physically strong. He admitted that many of them were probably stronger than he was, but they lacked exposure to different styles. They simply weren’t prepared for unusual made-in-New-York-Paul-Rosenthal actions.

In comparison to Guatemala, we all agreed that this place was definitely serious training facility with serious students. Unfortunately for them, nothing would prepare them for the New Yorker traveling band of fencers.