by Stephen Jan in Budapest, Hungary 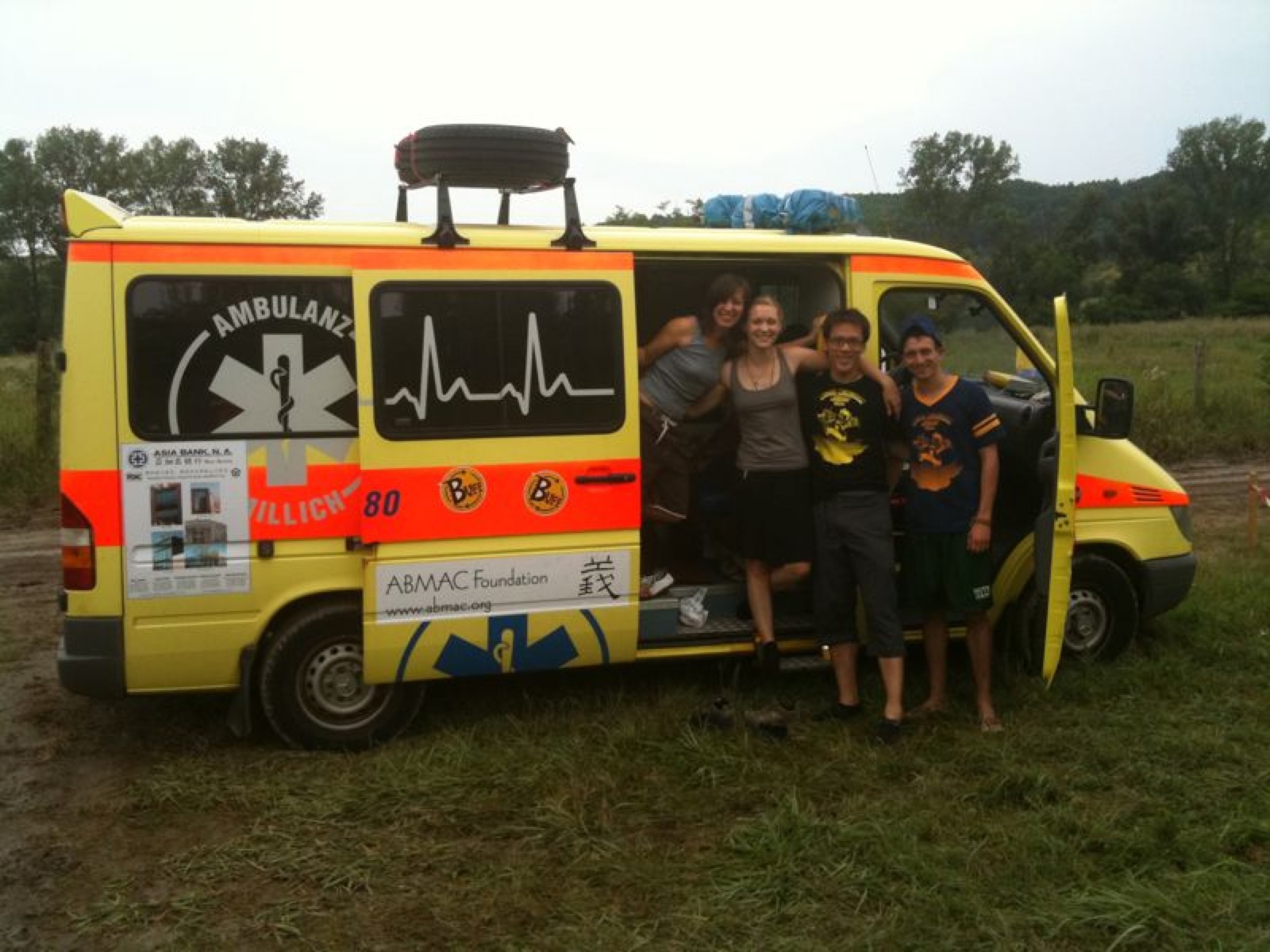 We woke up to a wet, cold, rainy morning in Bekcse. Like at Czechout, we parked on a field among other cars belonging to other groups, though this time we were proudly the only ambulance. After half an hour of pushing, pulling, and cursing the car out of the mud, we drove toward Budapest and dropped off our friend Bernhard at Budapest International, which sorta reminded me of the airport in Chattanooga, Tennessee.

The next stop was central Budapest. We had driven through the night before, but this time we were in the mood for some city exploration. We parked in a narrow alley where convention apparently suggests that cars should park on a tilt, half the car on the side walk, half on the street. We were standing around the ambulance admiring our beautiful parking job, patting ourselves on the back, when hulking white ambulance turned the corner into our alley. The vehicle was covered with colorful stickers and decorated with an irish flag, proudly mounted on the roof. We hooted, hollered, and danced around the alley welcoming the surprising sight of another mongol rally team. As they shared with us wedges of fresh watermelon picked up from a roadside fruit stand, we began trading stories. They told us that they had gotten lost looking for the Hungarian baths. We tried giving them some help but one clueless American mongol rally team giving directions to another lost Irish mongol rally team in Budapest really wasn’t going to amount to anything. Anyway they pushed on and continued to search for their destination while we searched for food. 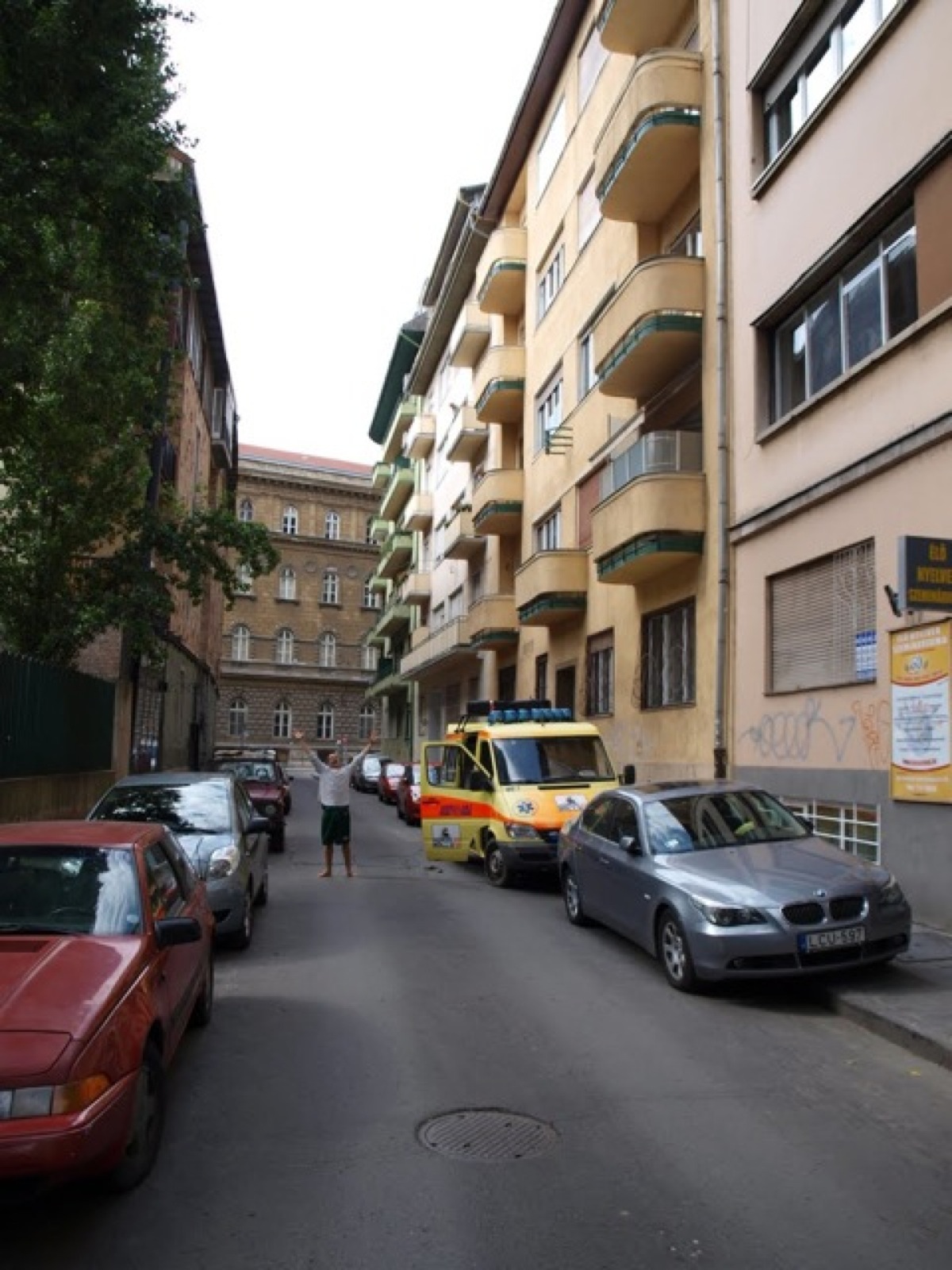 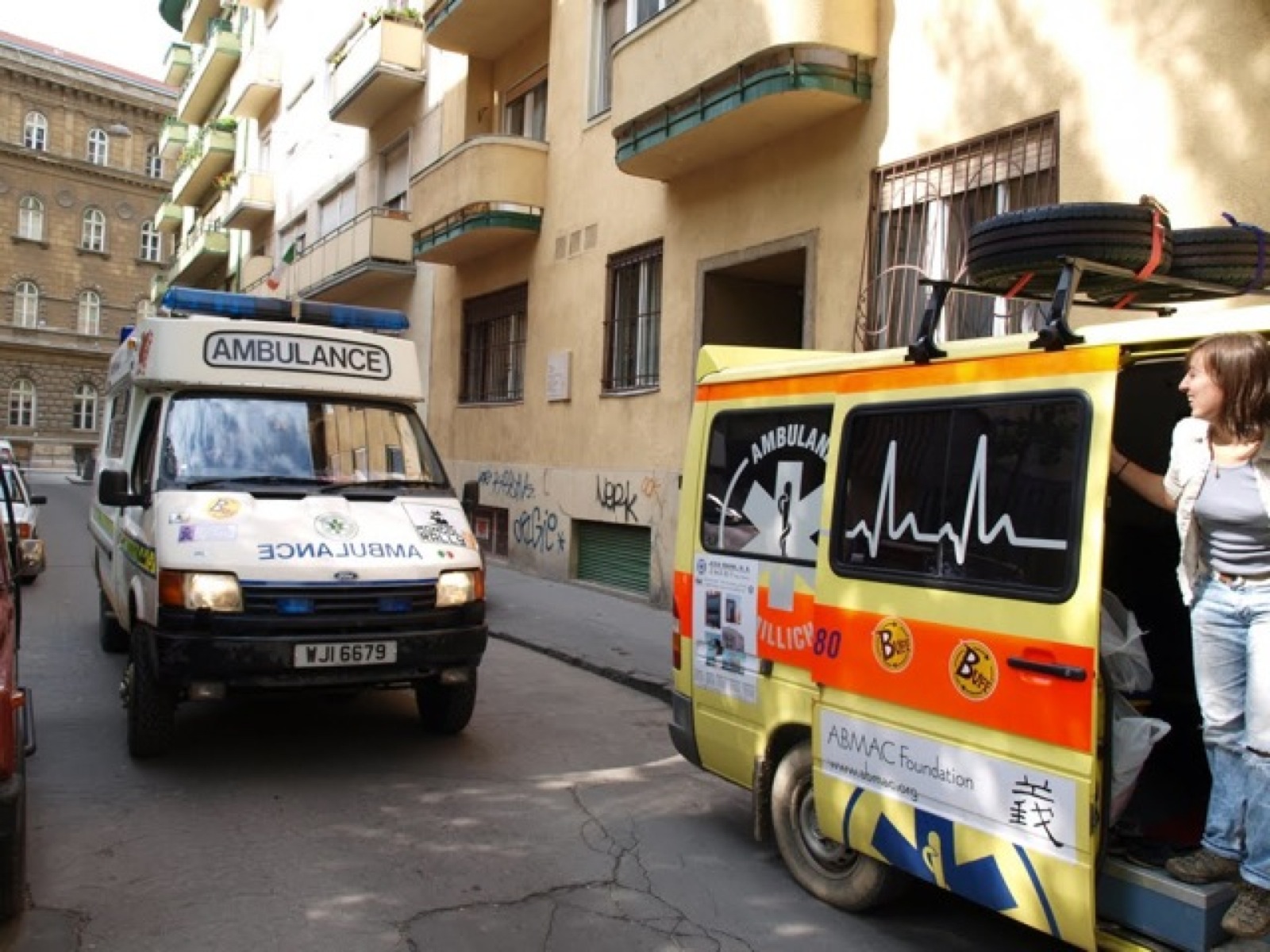 We spent the next several hours looking for the perfect bowl of Hungarian goulash, eventually stopping at a place advertising the ‘best’ goulash in the city for a whopping 5 euros. We all agreed that the cafe might have mistaken “best” for saltiest but team Magical Mongolian Mystery Tour wasn’t about to start an international incident over goulash. The waitress was quite a character. She spoke fluent british accented English, repeatedly dropped dishes and cups, and constantly lamented about the difficult life in Hungary. She bid us farewell and a good journey and we were once again on the lookout for inexpensive beer.

On our way back from a local outdoor square, we came across the two Ulanbataar Hero cars parked in an alley. These cars equipped with four wheel drive, solar panels, and car wrap drew up a ton of admiration back at Goodwood and Czechout . The team was nowhere to be seen so we left a “Team mmt wuz here” business card on their windshield. We made a restroom stop at a pub to unload all the beer we drank at the park. I loitered around the front door waiting for everyone when two tall kilt wearing, Brit sounding men stumbled out of the bar both completely piss drunk. They wore blue polos with giant ornate crests embroidered on their backs and a mongol rally emblem on the front chest pocket. We had come across Team Beer Bongolia whose team motto was literally: “When we aren’t driving, we’re drunk!!” I had heard that Brits were terrible alcoholics but this was the first time I’ve witnessed it first hand. First they quizzed my team about American geographic trivia. Next, they abruptly decided to hop to another bar close by. The two teammates insisted that our team join them and started skipping down the block. Midway down they stopped at a hydrant, struck a dramatic pose, lifted their kilts and proceeded to urinated on the hydrant in unison simultaneously beckoning for us to come on over.

Three hours into the night, I was startled awake by the loud sound of banging on our car. As I slowly came to, I recognized Tom’s screaming voice wailing something about a strange creepy cat man. Bleary eyed and confused, I sat up and peered out the window to see an old man feeding a swarm of cats out of tupperware boxes. Tom impatiently continued his cries for help as I slowly stepped out and helped him down. According to Tom, at some point deep into the night, when he was in deep sleep, this old man started yelling at him, supposedly to get down. And so it goes that one hot summer night, in back alleys of Budapest there was a strange Hungarian cat man yelling at a kid from Omaha sleeping on top of a yellow ambulance.

The rooftop incident taught us that the sleeping quarters needed a facelift. We needed to be able to sleep three in the back comfortably. Looking for inexpensive furnishings we turned to furniture capital of the world: Ikea. After the swedish meatball lunch we spent the next several hours taking measurements of the car, designing/shopping for our ambulance bedroom, and assembling Ikea furniture behind our ambulance in a parking lot to the stares of confused passing Hungarians. Next stop Serbia. 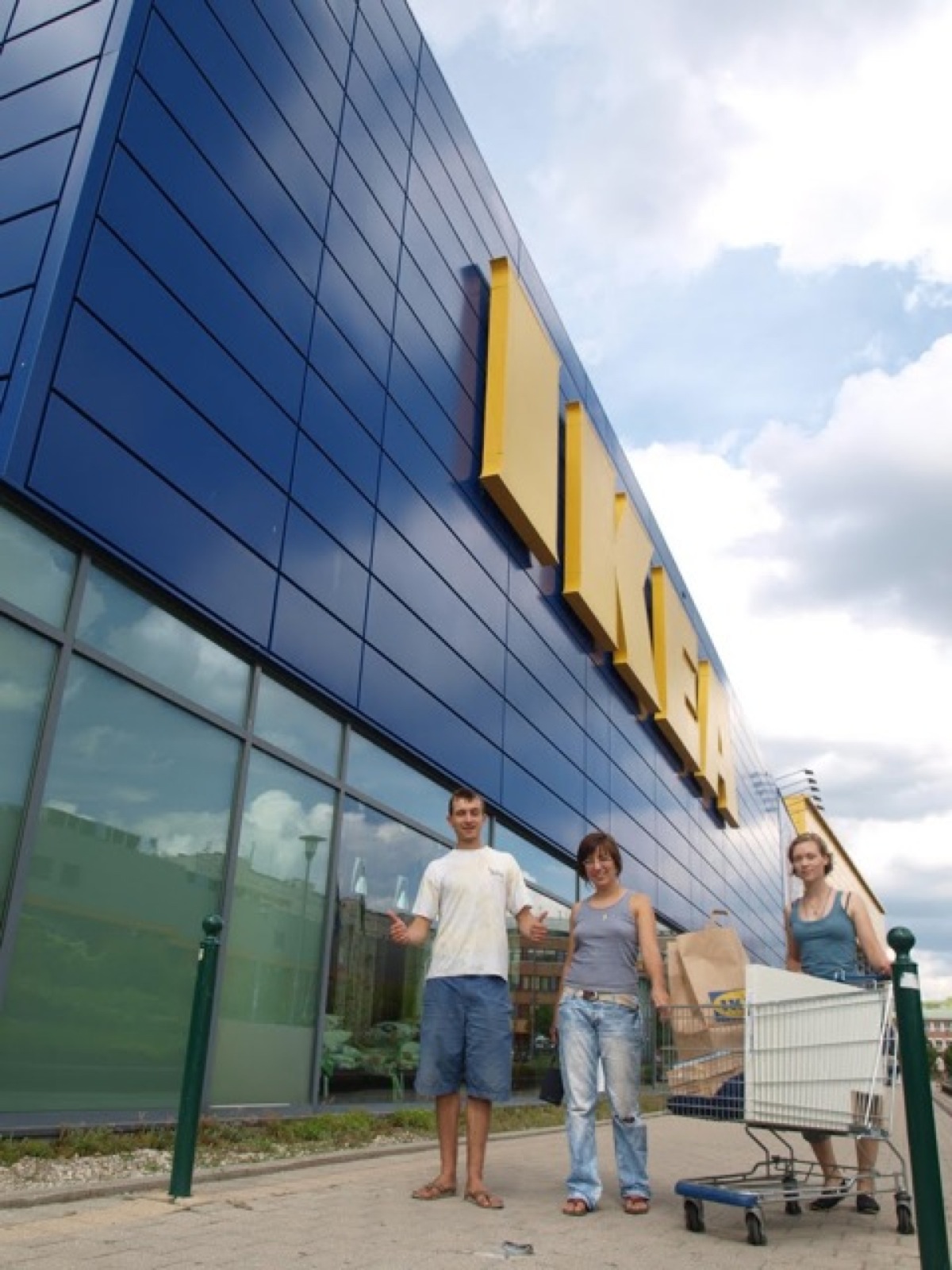 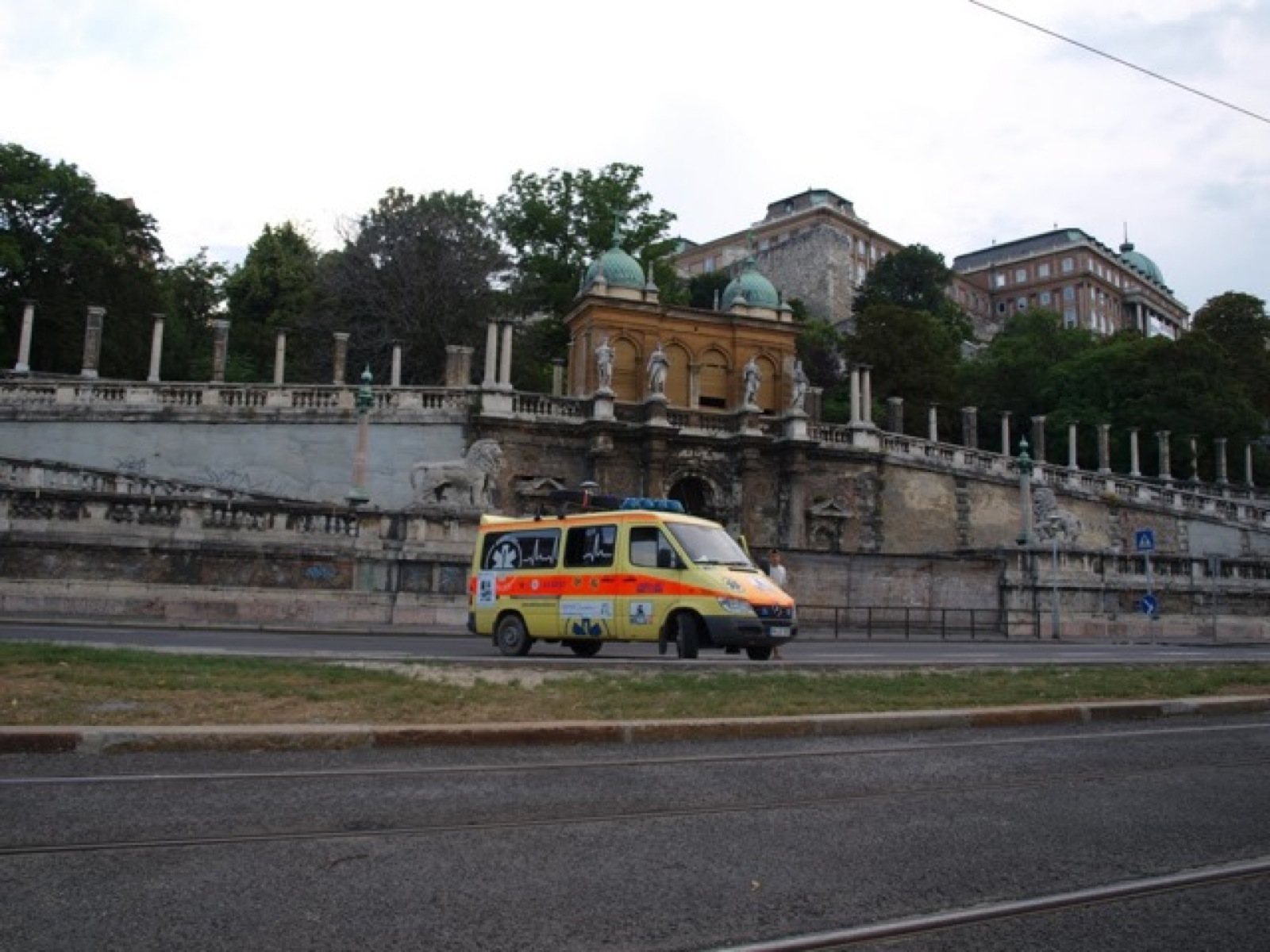