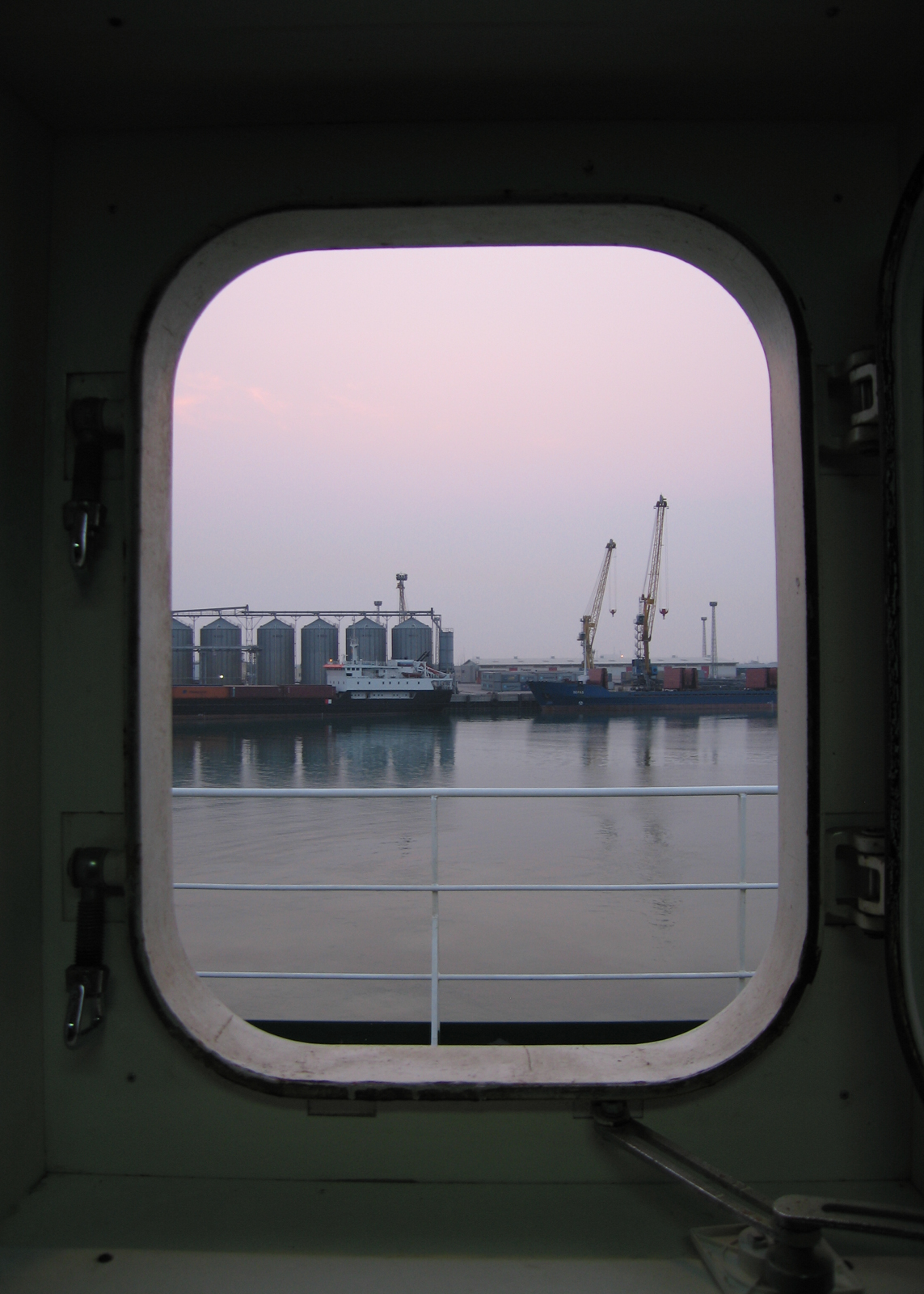 We arrived in Actau after our ferry ride across the Caspian, hungry (since we had survived on bread and caned tuna) and tired (despite sleeping almost all 24 hours on the ship except when we woke up to eat and drink more Jonnie Walker). Lillie, Tom and I were particularly happy to escape the tiny cabin we shared with a hugely pregnant, chain smoking, Kazakh lady. Ivan took pity on us because, in his words, “you are like child to me” despite the fact that he is only 24. Even with Ivan’s help, it took nine hours to navigate through customs. Pete and Stephen arrived to our great relief at the port while we were still trying to get through customs. Our group was once again reunited!

We refused Ivan’s sincere offer to find us prostitutes for the evening, but we accepted his offer to find us a restaurant and cheap hotel. We spent the evening dining together on Caspian sea fish, which I was somewhat dubious about after spending some intimate time at the not-so-hygienic Baku port, but was really pretty good. The hotel Ivan found us was not cheap, but was by far the nicest sleeping accommodations we have had the entire journey. It had all the frills of a 4 star hotel including a fully equipped kitchen. The Italians nearly swooned with joy when they saw it and immediately began chattering excitedly with each other in Italian about what they were going to cook for our second dinner. We spent the night swimming in the Caspian Sea and enjoying our accommodations to the fullest extent possible before passing out in exhaustion. 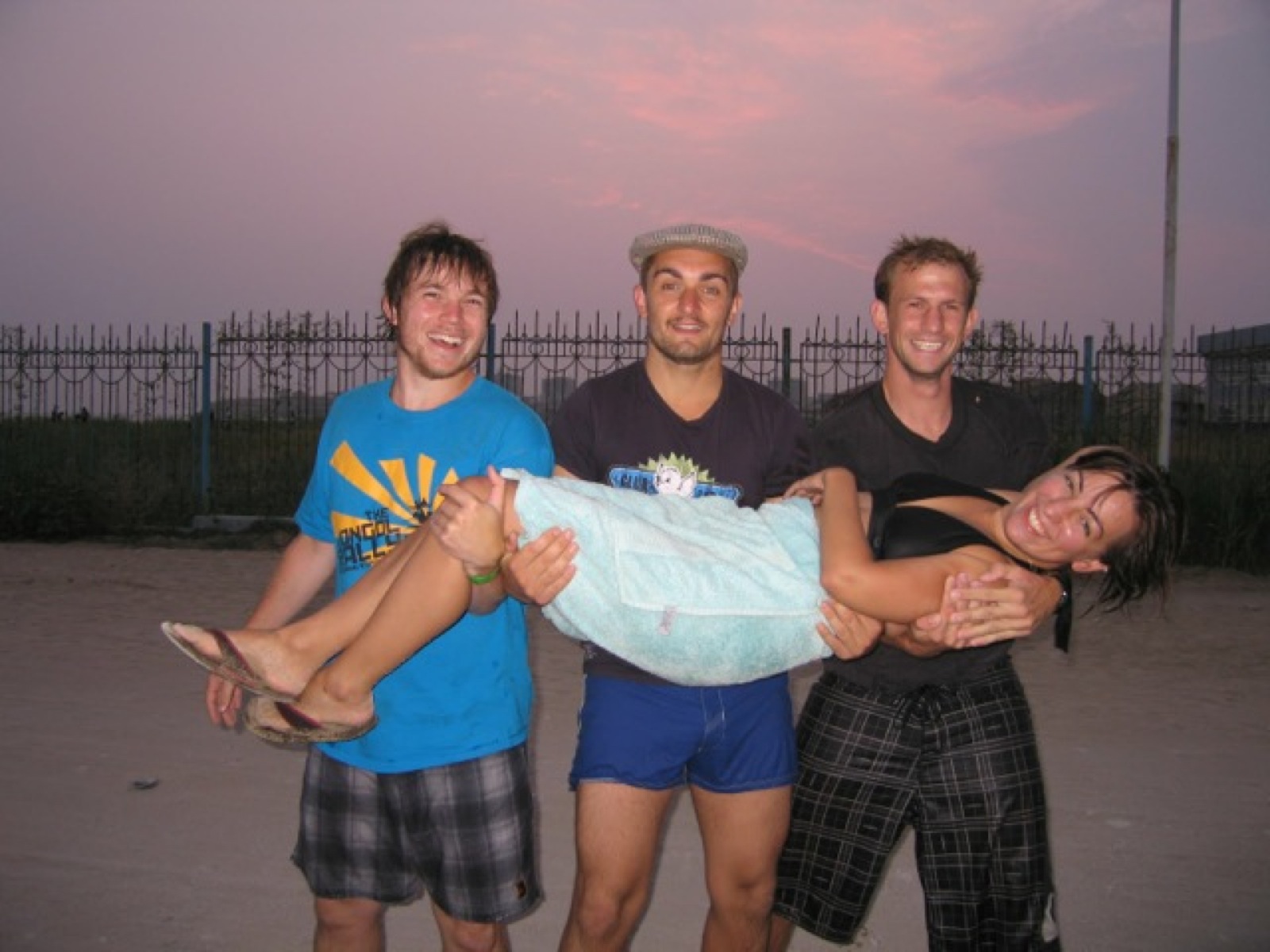 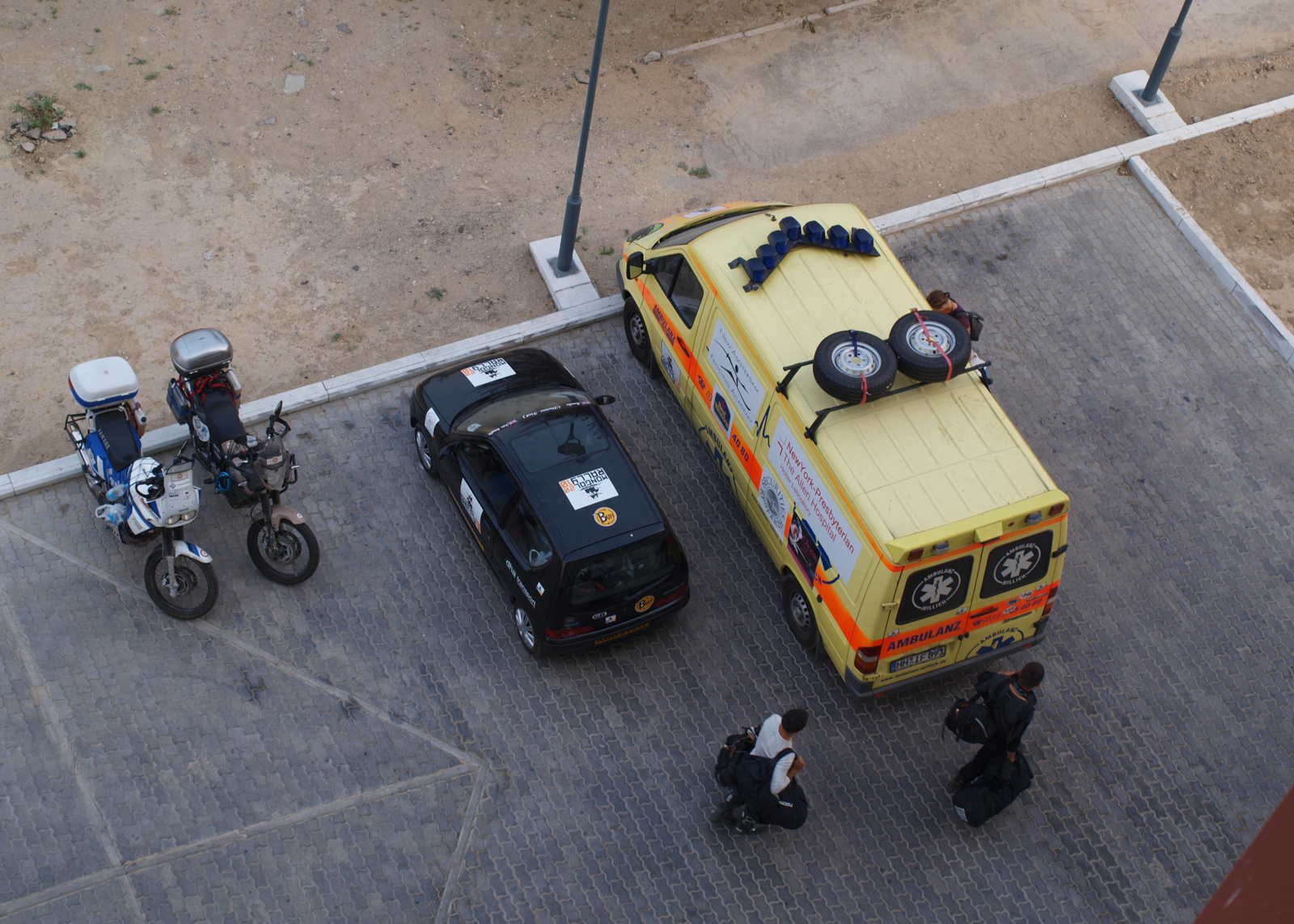 The next day we began the journey to Beyneu. It was not that far away-only 300 km, so we figured we would make it there in time for a late lunch. Despite Ivan’s warning that Kazakhstan is like “wild wild west” and his prediction that we would not make the journey across Kazakhstan in less than 4 weeks, our hearty meals and fitful slumber had left us in high spirits. We were happy to be on the road again after nearly a weeks delay in Baku.

We rolled along at a steady pace for the first 100 km. There were plenty of potholes, but nothing we couldn’t handle with ease after Azerbaijan. “Those people haven’t seen what a Mongol Rallier has seen,” scoffed Tom. Suddenly the potholes disappeared along with the asphalt. Our caravan came to a halt. It was as though we were at the precipice of a cliff and no one wanted to dive in. This can’t be right, we thought. Where is the road? Then we saw one- a rickety truck with four spare tires tied to its roof gunning toward us, kicking up a cloud of dust and gravel as it got thrown from one side to the other completely at the mercy of the road. It looked like it was about to shatter. This WAS it. The end of the road for many a Mongol Rally team. Not for us! We discussed a strategy and decided the Italians would travel ahead to scout the way and because they had to maintain a fast speed to control their bikes while we would slowly make our way around the craters in our path and carry all their gear in our ambulance. The fiat would bring up the rear, braving the road despite its lack of a skid plate and proximity to the ground. 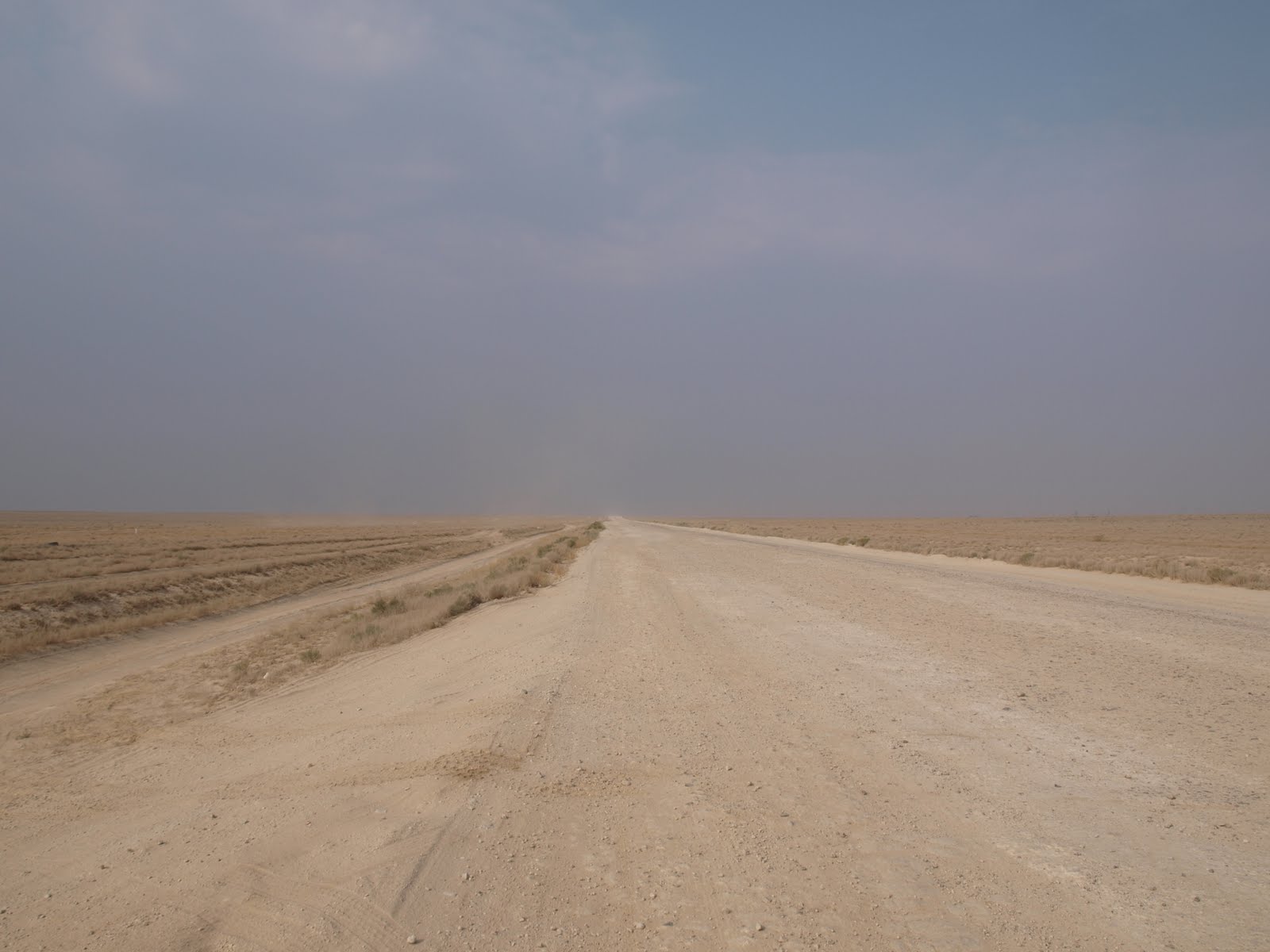 With this plan in place, we confidently made the leap. After nine hours, of crawling along trying to save our vehicles from a fatal injury, darkness was setting in and we had only made it 100 km. We were not even close the Beyneu. Exhausted and dejected we started looking for a place to eat. We found a cafe at a roadside truck stop, and decided to stop knowing we would not find much better considering there had been no other options. The cafe was not a pretty site, but that didn’t deter us. We even decided to sleep in their hotel for the night to get a wash and a good nights sleep. We sat at the cafe and quickly found there was no running water, clouds of flies covering everything, and the dirtiest kitchen I have ever seen. After my bout of food poisoning in Baku, even starvation would not compel me to eat here. We decided to forgo the cafe food for our trustworthy canned tuna and ramen. 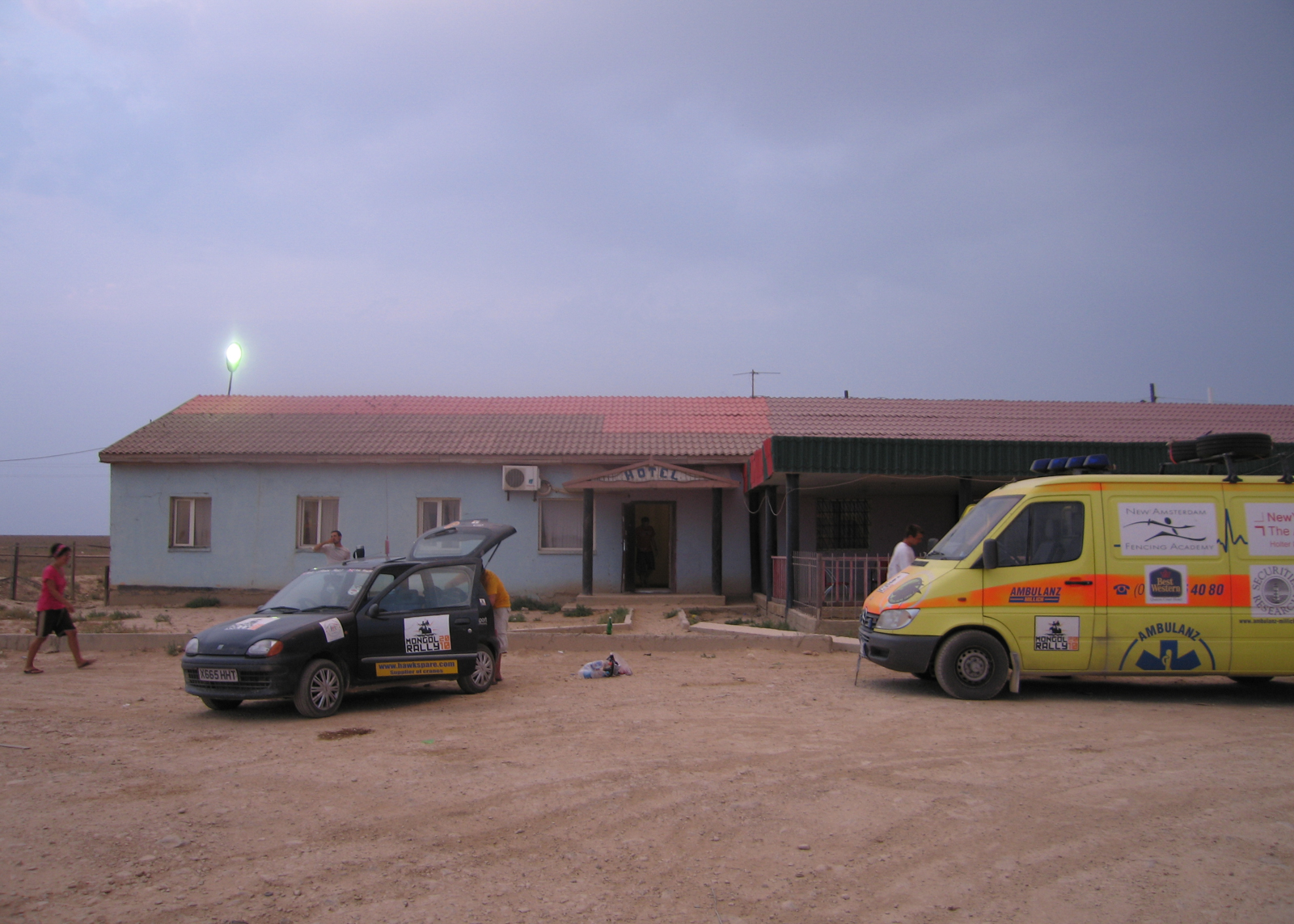 Our sleeping accommodations were as sad as our hotel in Actau was fabulous. Hard beds, lumpy pillows, and a lingering unpleasant odor. Despite all this, It wasn’t until I opened the bathroom door that I realized we had been gauged at $8 a piece. There stood a sink- no shower, no toilet, just a sink. A sink without running water.

After a none-too-restful night, we dragged ourselves out of bed without washing, without eating breakfast, and without using the toilet (which I took one look at and decided I just wouldn’t drink much water that day). Time to hit the road again. Thus ended our first two nights in Kazakhstan.