The next day we drove for 18 hours straight, determined to make it to Astana. We ate bread and cold baked beans from our supply and kept spirits high by singing “Bohemian Rhapsody” to the Brits over our walkie talkies. They answered with a truly awful version of “Born to be Wild.” 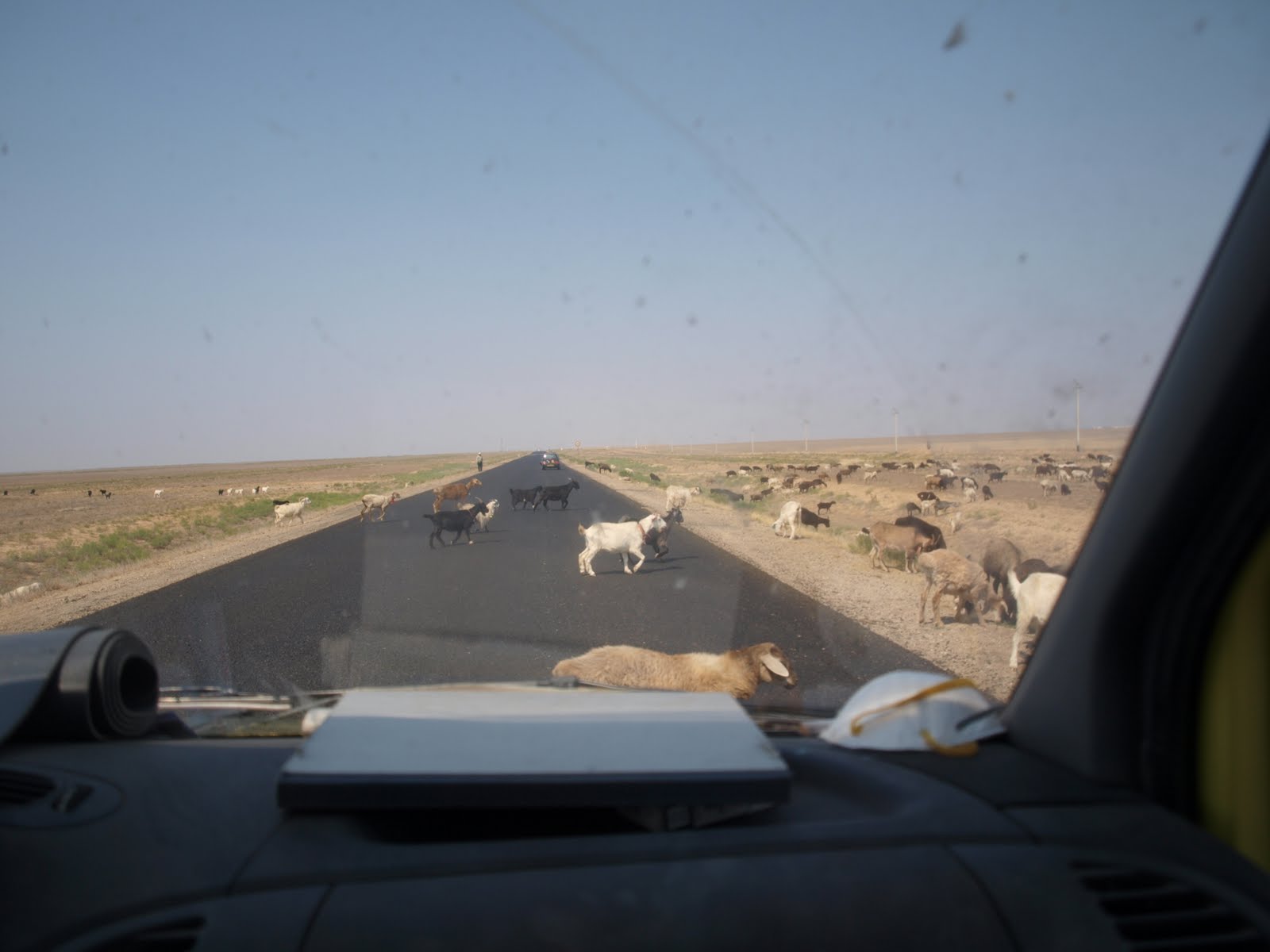 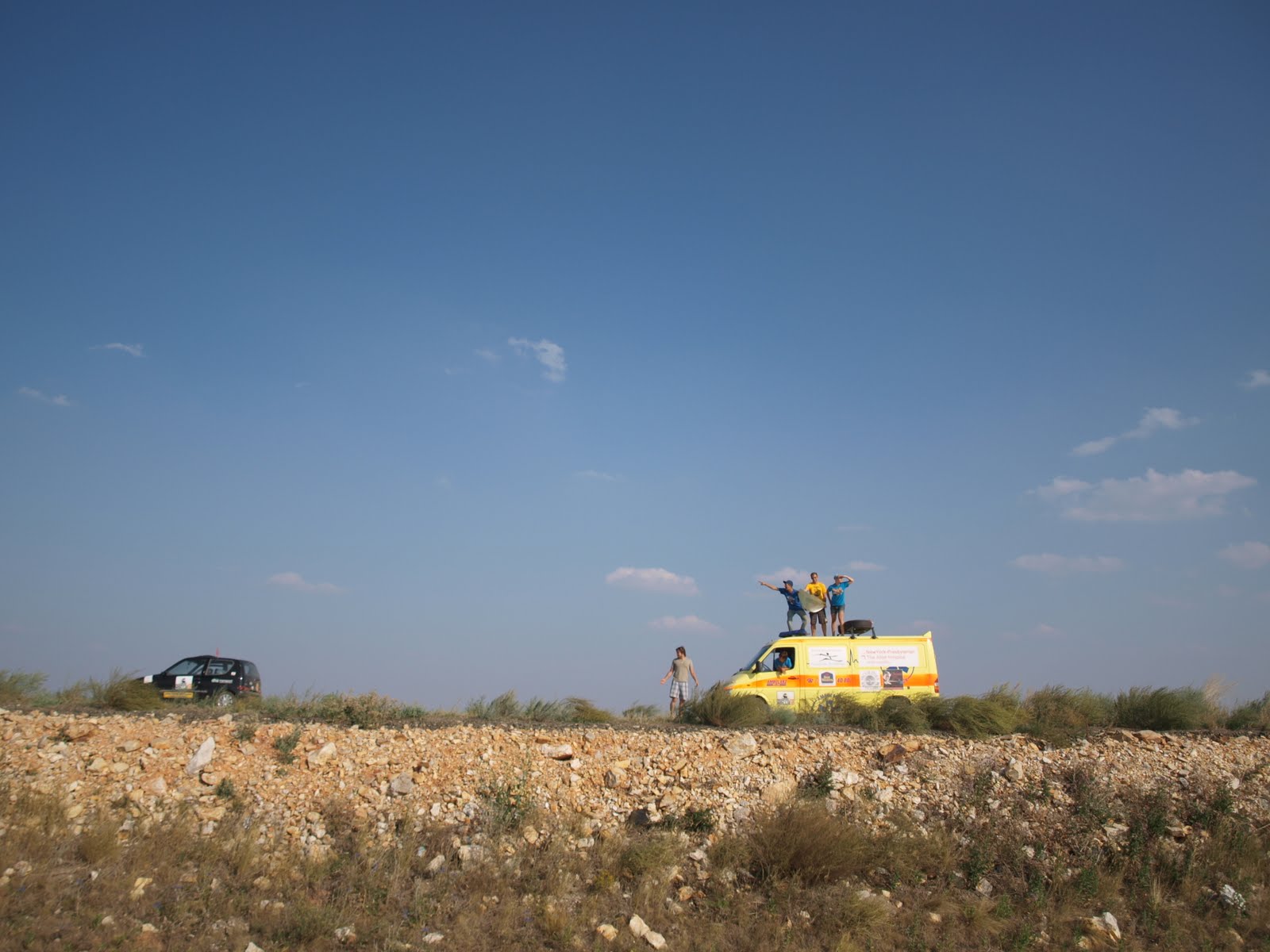 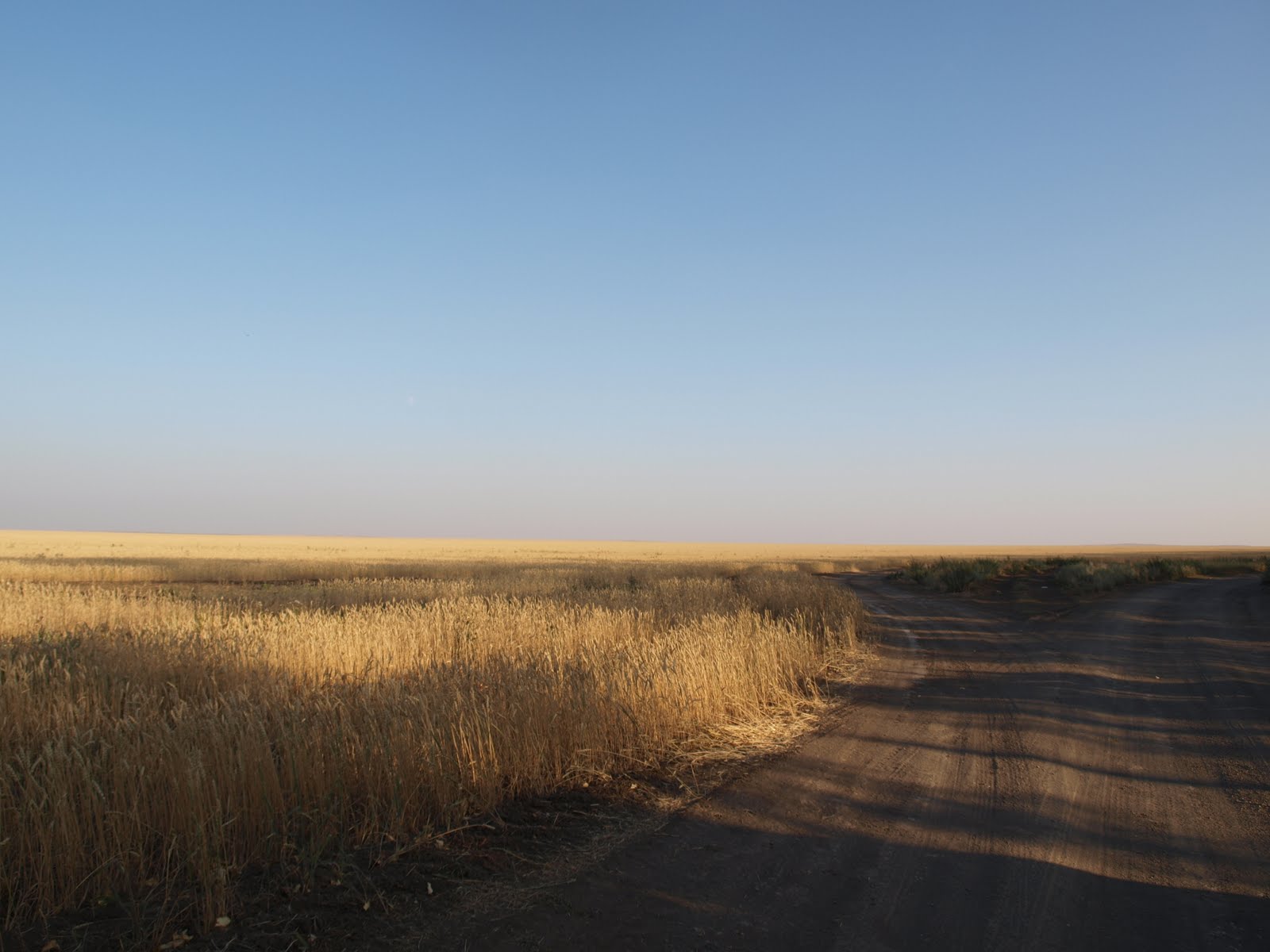 We were all aching for a break and I guess the mystery mobile was too, because suddenly she just stopped. We coasted over to a gas station to investigate. After opening the hood we discovered that our fan belt was shredded. No problem! We have a spare. The problem is putting it on. You see, even though we have a licensed mechanic on our team, the guide book to the ambulance is in German; and even though we have a fluent German speaker, she knows nothing about cars. Stephen and Lillie gave a crack at it anyway.

After an hour they hadn’t made much progress. Some locals had wandered over to take a gander at the four Americans fumbling around messing up their vehicle. They finally interrupted and signaled for us to move aside. We were happy to let them have a crack at it, but were sure they wouldn’t do much better since they would encounter the same difficulties we had (a manual in a foreign language and lack of the proper tools). In anticipation of our joint failure, Marc and Pete drove off to the town nearby to try and find a mechanic.

The Kazakhs bent over the engine; then they bent over the manual; then they bent over the engine again-all the while chain smoking with their heads under the hood. For an hour they attempted to put on the fan belt by looking at the pictures in the manual and working by feel. Finally their heads emerged, lit cigarettes dangling dangerously from their lips. They closed the hood. There was no fan belt in their hands. They signaled that they were finished. We didn’t really believe it. We knew they had put the fan belt somewhere in the car, but in the right place? Yeah right.

Just then the fiat drove up with a third passenger in tow. They produced a mechanic. The mechanic took a look at the ambulance for thirty seconds and pronounced her cured. The Kazakhs who had worked on our car practically rolled their eyes. We offered them money, which they refused, and vodka, which they also refused. Finally, we just offered them heartfelt thanks, and they accepted. They either helped us out of the goodness of their hearts or because they, like Ivan, seemed to sense we were “like children.” Either way, they got us on the road again.

With only minimal delay, we continued toward Astana. The sun went down and we were still pretty far. We began rotating drivers with more frequency as people got tired driving in the dark. At 1 a.m. I was riding in the fiat trying to do anything possible to keep Marc and me awake. Singing songs and insulting each other were the most commonly implemented methods. Suddenly, there was a pile of dirt blocking our path. A huge pile of dirt on the highway about twenty minutes before the Capitol of Kazakhstan (my only explanation for this phenomenon is that it is the Capitol of Kazakhstan). There did not seem to be a way around the pile. To Marc and I that meant we should double back and take a side road; apparently to Stephen it meant gun the ambulance and try to get over it. The ambulance made it to the top, but didn’t quite make it over. It got stuck on its middle with both sets of wheels dangling free on either end. We all got out of our vehicles and started cracking up. The ambulance looked like a beached whale. First we tried to push it, but it became clear that pushing the whale’s dead weight was too much. I ran out onto the highway to flag down a vehicle large enough to tow us. After some creative sign language that I later realized looked more like a thrusting motion than a towing motion, I was able to get a truck and a car to backtrack and help us. The truck unbeached the Ambo in no time and we were on our way again.

At 3 AM, after passing many more dirt piles, all of which we managed to find a way around rather than over, we finally entered Astana. Our joy at crossing the border was immediately staunched when flashing lights and a siren forced us to pull over. A Kazakh cop in a crisp uniform sauntered to the fiat. Marc and I stepped put of the car to wait as he approached. The first thing that reached us was his phlegm. A big wad of spit hit the asphalt at my feet, then another as he demanded our documents. I was only too happy to get my passport and international drivers license and get out of his spitting range. We presented documents for both the fiat and the ambulance. He did not even bother glancing at them before saying “no!” “No, what?” we asked gamely. According to this cop, no vehicles where allowed to drive into Kazakhstan… Unless of course you gave him some money. The cop didn’t bother being subtle: “Euros!” he demanded rubbing his fingers together and spitting some more. Marc and I thought that was hilarious, but we didn’t laugh, we started playing dumb. “what? Huh? We don’t understand. Euros? What are those?” The cop kept demanding money and spitting profusely and we kept looking at him blankly and voicing our confusion loudly. Every demand had a three spit ratio: “euros!” spit, spit, spit. “dollars!” spit, spit, spit. After about 20 minutes of this he was either running out of saliva or bored. He slammed our documents down on the car, and said, “go, go,!” spit, spit, spit. Marc and I grabbed our documents and with bits of phlegm flying after us, we left as quickly as we could, into the city where no one is allowed to drive. Welcome to Astana. 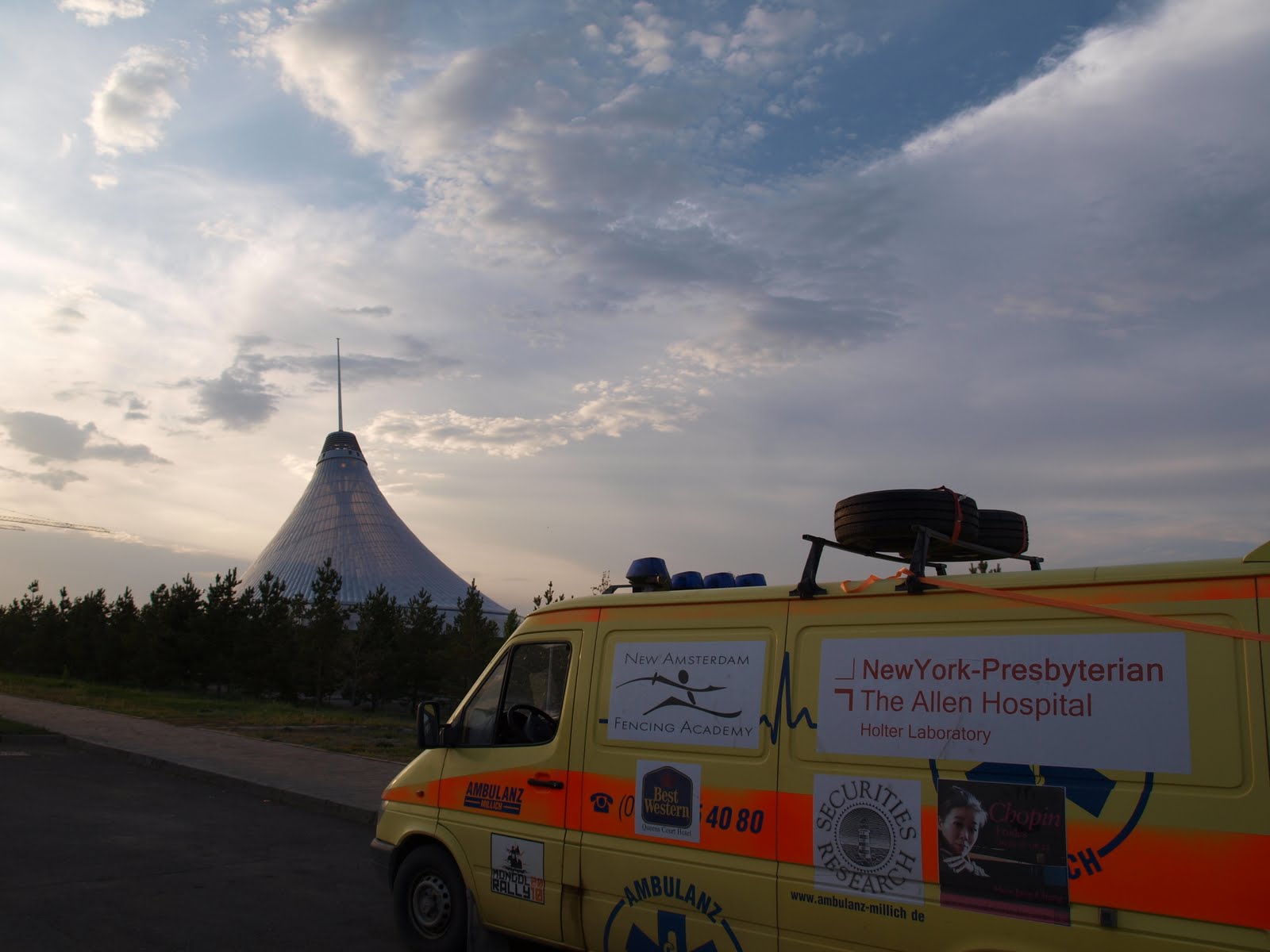