The sun had just begun to rise when we began day 2 of driving to Beyneu, so it was not yet hot. However, feeding and watering six hungry travelers was eating through supplies quicker than we expected. Tom was beginning to look like a refugee camp survivor (or hipster depending on how you want to look at it) due to our rationed meals and was urging us forward on behalf of his stomach. Our diminishing water supply also added to our sense of urgency because we knew there was nowhere to stock up in the desert. We had to make it to Beyneu today! 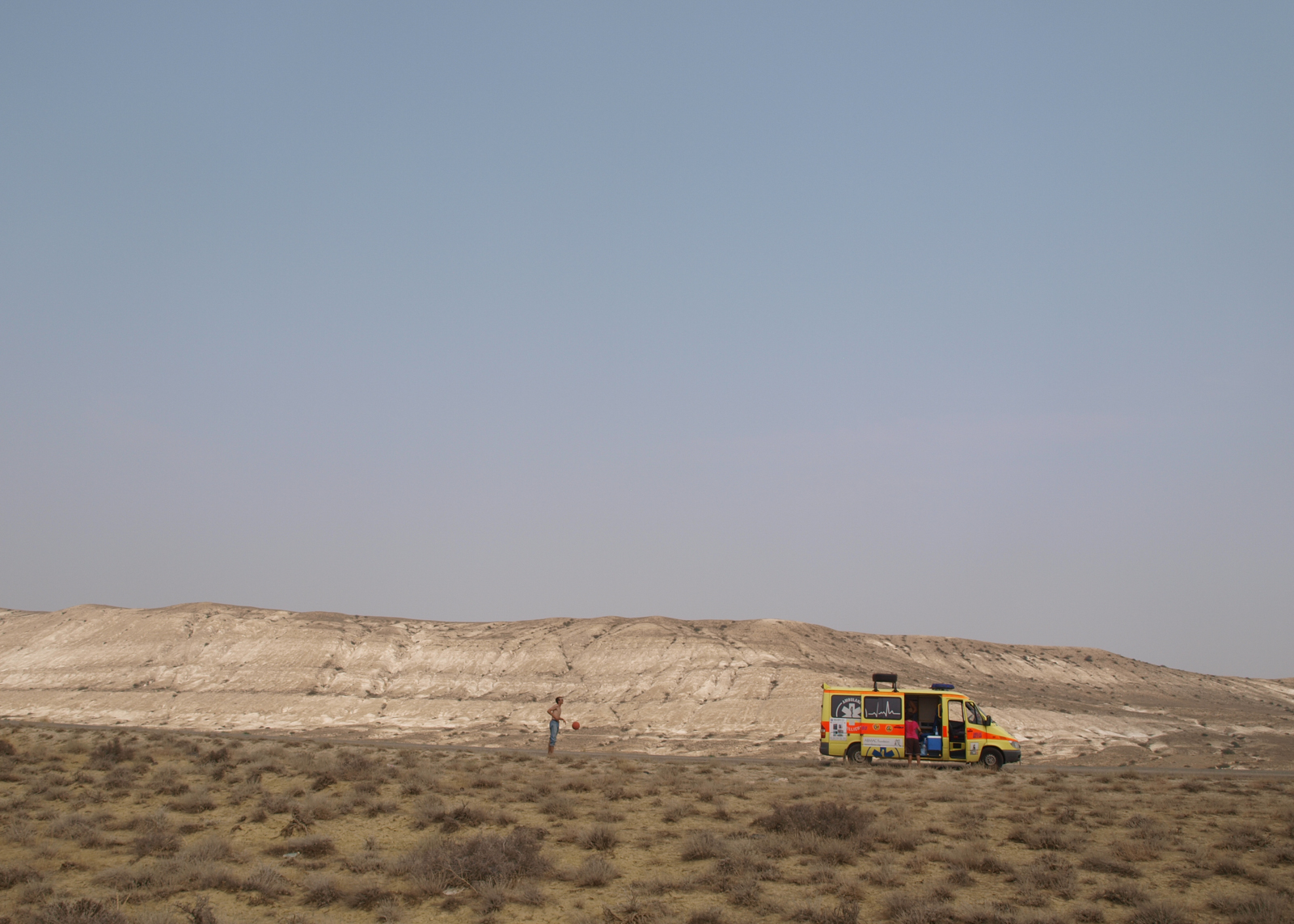 We began crawling our way along the road: up a pothole, fall into another, bounce, shake. Before we knew it the sun was high, turning the mystery mobile into a miserable oven. The driver and front seat passenger had to use all their concentration to make sure the ambulance didn’t break in half. For the backseat passengers, there was nothing to do but hold on tight and get jostled around as though you were on an amusement park ride. There was no way you could read or sleep without the fear of flying through the windshield or hitting the ceiling. Instead, I spent my time in the back looking out the window into the vast empty desert and creating wet impressions of my body on our backseat with my sweat.

As I stared out the window, I began noticing small sand tornados picking up around the desert. We all thought that was pretty cool until it became a full blown sand storm. Visibility disappeared in a matter of seconds. I opened the passenger side door to talk to the Italians who had taken shelter in a bus depot (they supposedly have a bus rout on this road though we never actually saw any buses) and it nearly flew off the hinges. I jumped out to close it and could barely push it shut against the force of the wind. Now I was outside experiencing the full force of the storm-mostly it stung-my eyes, my skin, even my nostrils where getting whipped with sand. Lillie rooted out the face masks for the costume party we missed at czechout and we quickly put them on and took shelter in with the Italians. There was nothing we could do but wait out the storm. 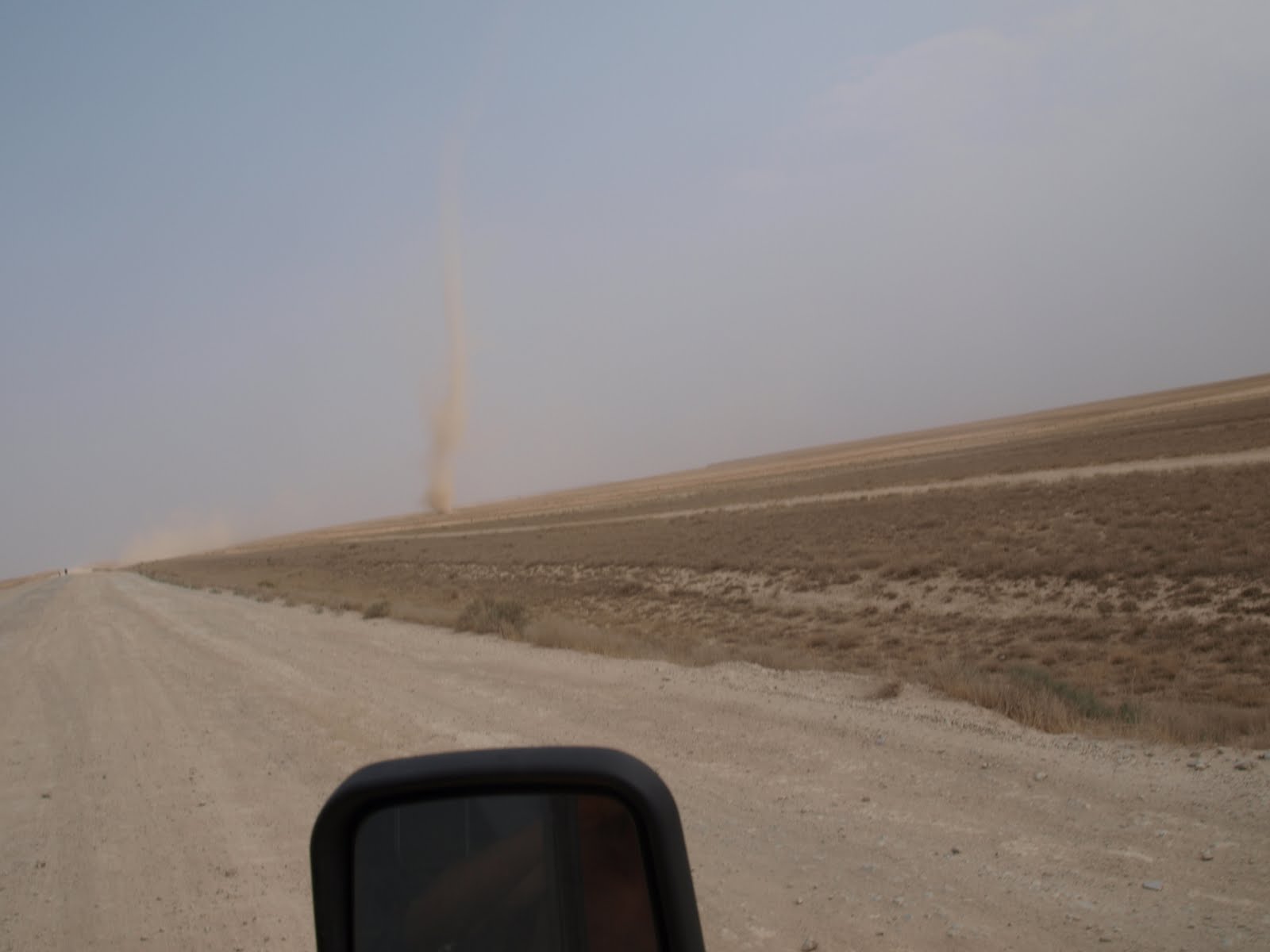 The storm died as quickly as it had risen and we were soon on our way again. After another couple hours, I noticed something in the distance. It looked like water, but Francesco and Danielle were standing on it. Was it a mirage? Could it be…Asphalt? Asphalt! We started wooping and hollering when we were still a km away. We ran out into the road and danced in the street. Tom rolled on the asphalt with glee. Who knew concrete could bring such joy? We rolled into Beyneu feeling as though a red carpet had been unfurled for us.

Beyneu was just a small city. It’s highlight was the supermarket. Since we had planned on getting there yesterday, we decided to restock our supplies and keep driving as long as there was daylight. Our activity in the supermarket (buying everything in sight) and odd caravan must have attracted every kid under 12 in the city. They were soon swarming around us fearlessly exploring our vehicles and demanding attention. Stephen pulled out his ukulele and started teaching the kids “Three Blind Mice.” Soon he had an entire chorus singing: “tree bind rice.” Tom wipped out his basketball and taught the kids some fancy moves. The kids, unimpressed, demanded Tom serve as the hoop instead. We could not delay for long, however, and it soon came time to say goodbye to the Italians. They had a long, hard road ahead to get to Tajikistan and we were determined to make more progress through Kazakhstan. We said our goodbyes promising to meet for a reunion at the Baku port to reminisce about the good old days when we tanned for 14 hours a day and were on a strict all carb diet. 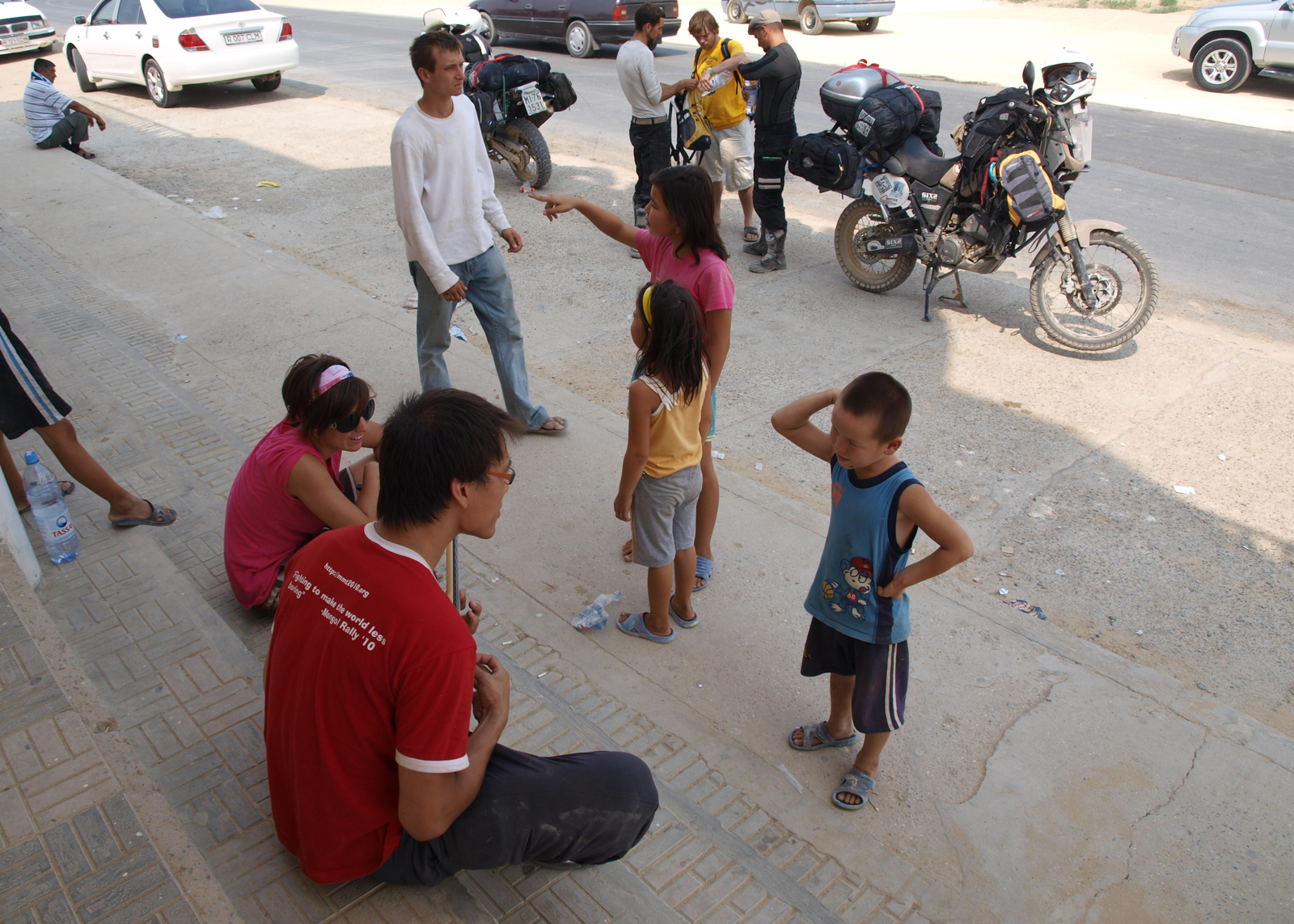 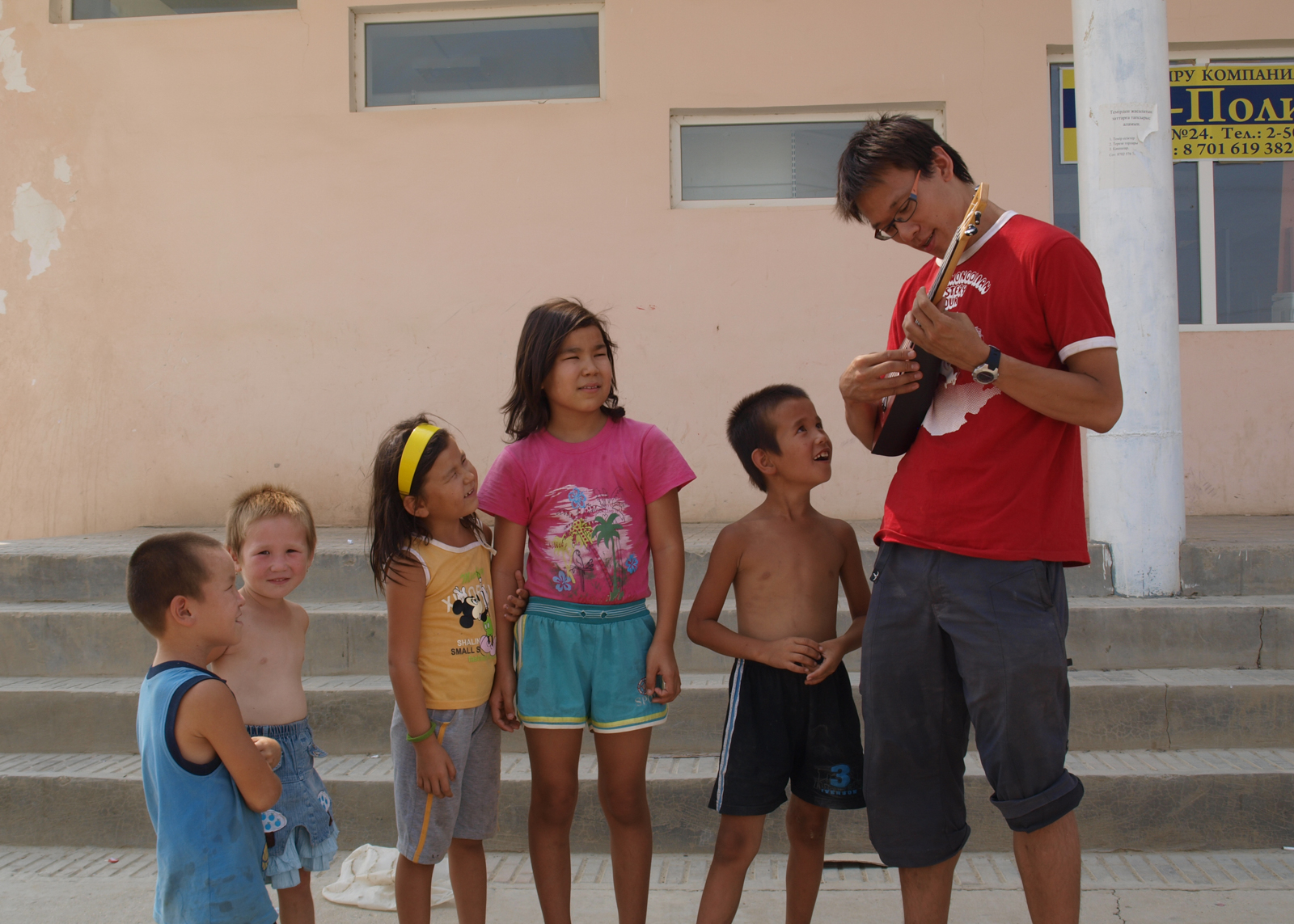 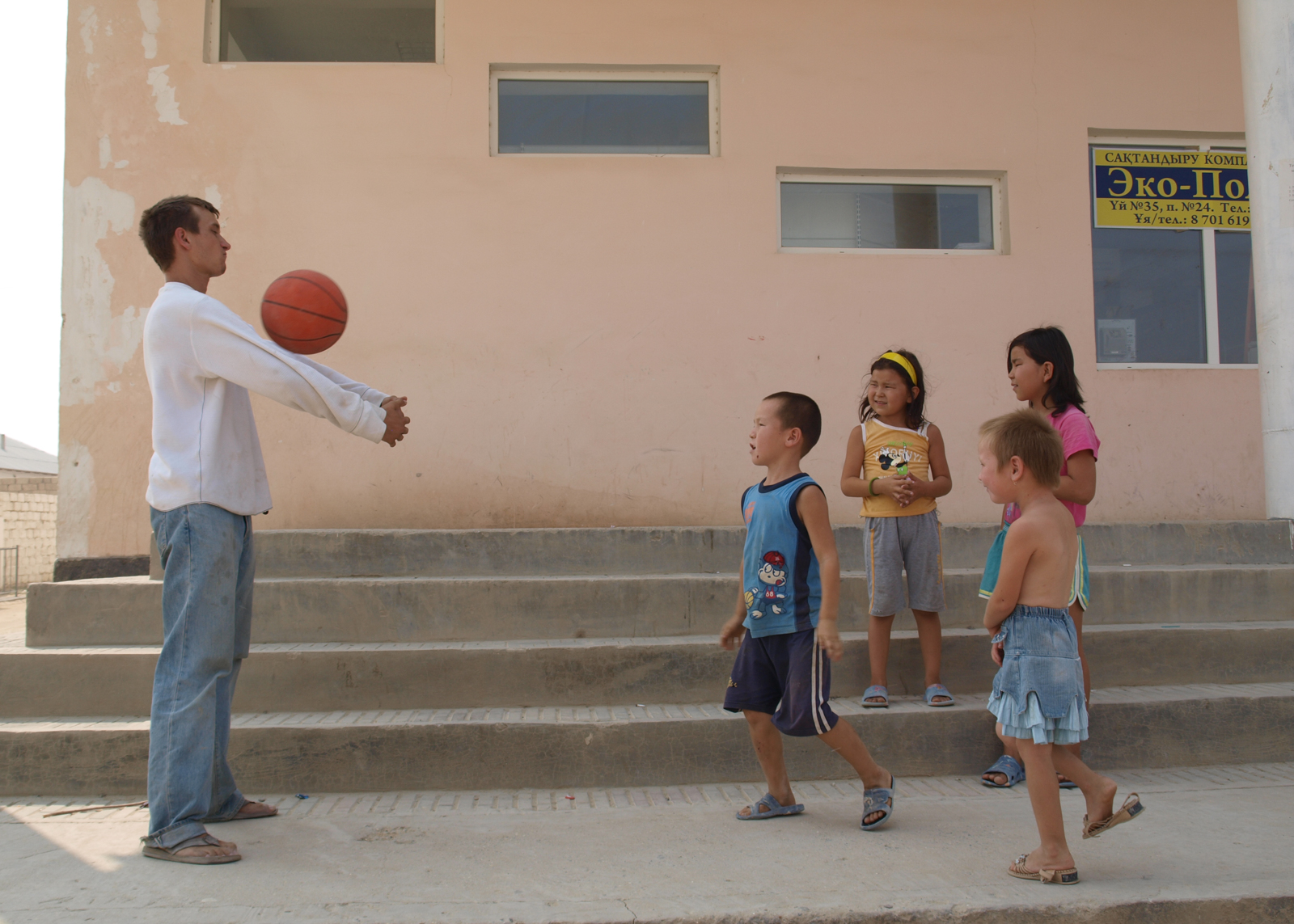 We left our fan club behind and hit the road with the Brits. We drove until sunset on roads that were craig filled but paved before settling on a random patch of desert for the night. Lillie and I prepared a 3 course meal to end our night: first course ramen noodles, second course salami and fried onions, desert vodka. Satisfied, we ended our third night in Kazakhstan. 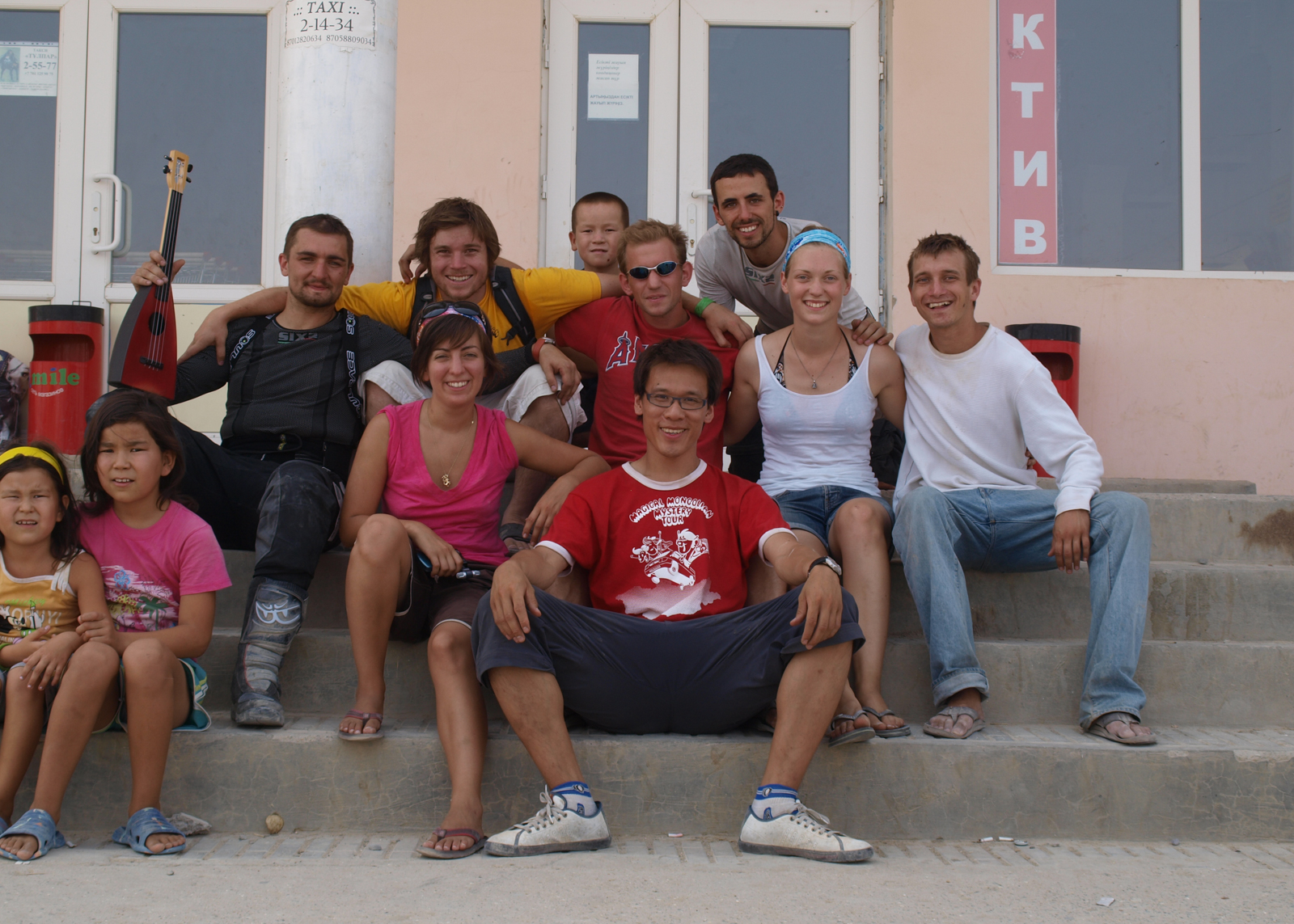