by Stephen Jan in Irkutsk, Russia 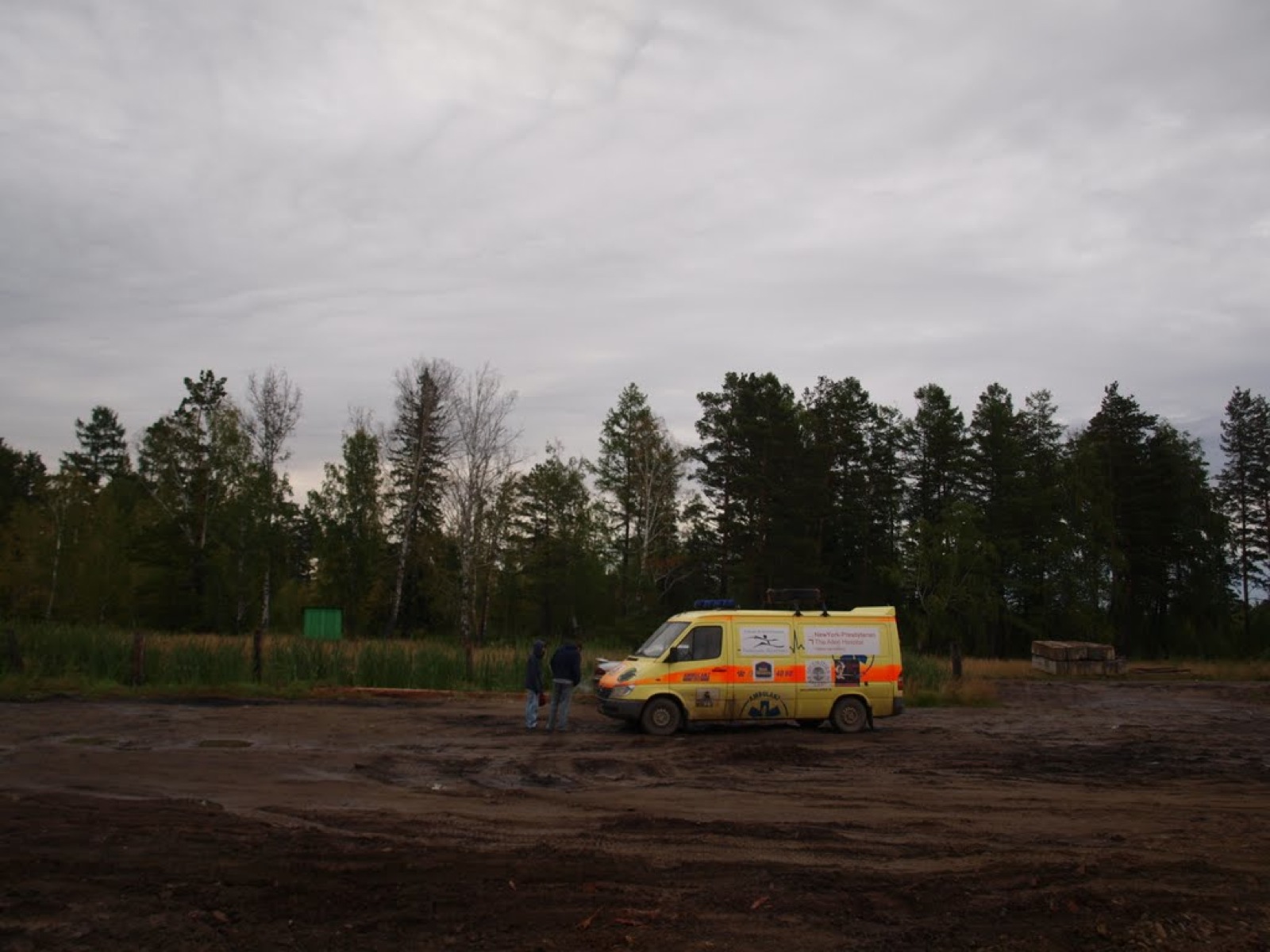 The drive to Irkutsk from Krasnoyarsk will go down as the longest streak of continuous driving for Team MMT on the 2010 Mongol Rally. We left Krasnoyarsk after a late lunch at 6pm and would go on to drive until 9pm the following day stopping only for fuel, 4am borscht, and the usual shenanigans like getting pulled out of the mud by a passing truck.

The roads in Russia have been pretty good to us but we did hit some seriously difficult roads in the mountains between the two cities. To be fair, unlike in Kazakhstan, Russia was visibly working on the roads. We drove past round-the-clock ground crews doing road work. They watched us with amused grins as bounced along the incomplete roads, no doubt wondering what on earth we were doing.

Tom and I drove through the night. We kept ourselves awake by conversing over topics like outlook on life and lessons learned on the Mongol Rally. As we entered the wee hours of the night, the conversations degraded into compiling laundry lists of our long lost comforts like favorite childhood candies, cereals, and cartoons.

Stephen: Yeah, can’t go wrong with raisins and flakes. [3 minutes….] Remember Big League Chew? I use to love that stuff.

Tom: Oh yeah that stuff was great, with those giant caricarture of basball players on the wrapper. I liked Bubble Yum

Stephen: There was just something about eating strings of bubble gum….

By 3pm the following day, we were 300 km from Irkutsk. Judy was feeling up for another dose of international driving. She assumed her usual upright, back straight, death grip battle-mode driving posture in preparation for the Siberian freeway. The drive was the usual uneventful sort with the typical narrow lanes shared with giant 18 wheelers and oncoming traffic dangerously swerving into our lane. I passed the time by singing (maybe shouting) Bohemian Rapshody and making sarcastic remarks about meeting an untimely demise in the hands of Judy and a drunk Russian truck driver with vodka in one hand and a cigarrette in the other, something Judy did not entirely appreciate. Anyway, an hour went by and from out of nowhere, a small Fiat sped by and dangerously cut us off. Judy began unleashing her usual road rage stream of profanity and curses until she stopped mid sentence and shouted “Oh my God it’s the Bataarheroes!!!!” Judy honked the horn furiously as the rest of the ambulance erupted in amazement. Bataarheroes had demonstrated such impressive no-nonsense mission oriented focus back in Tsblisi that we had all but expected them to be half a step away from the finish line by now, the last thing we expected was for them to pull up from behind! 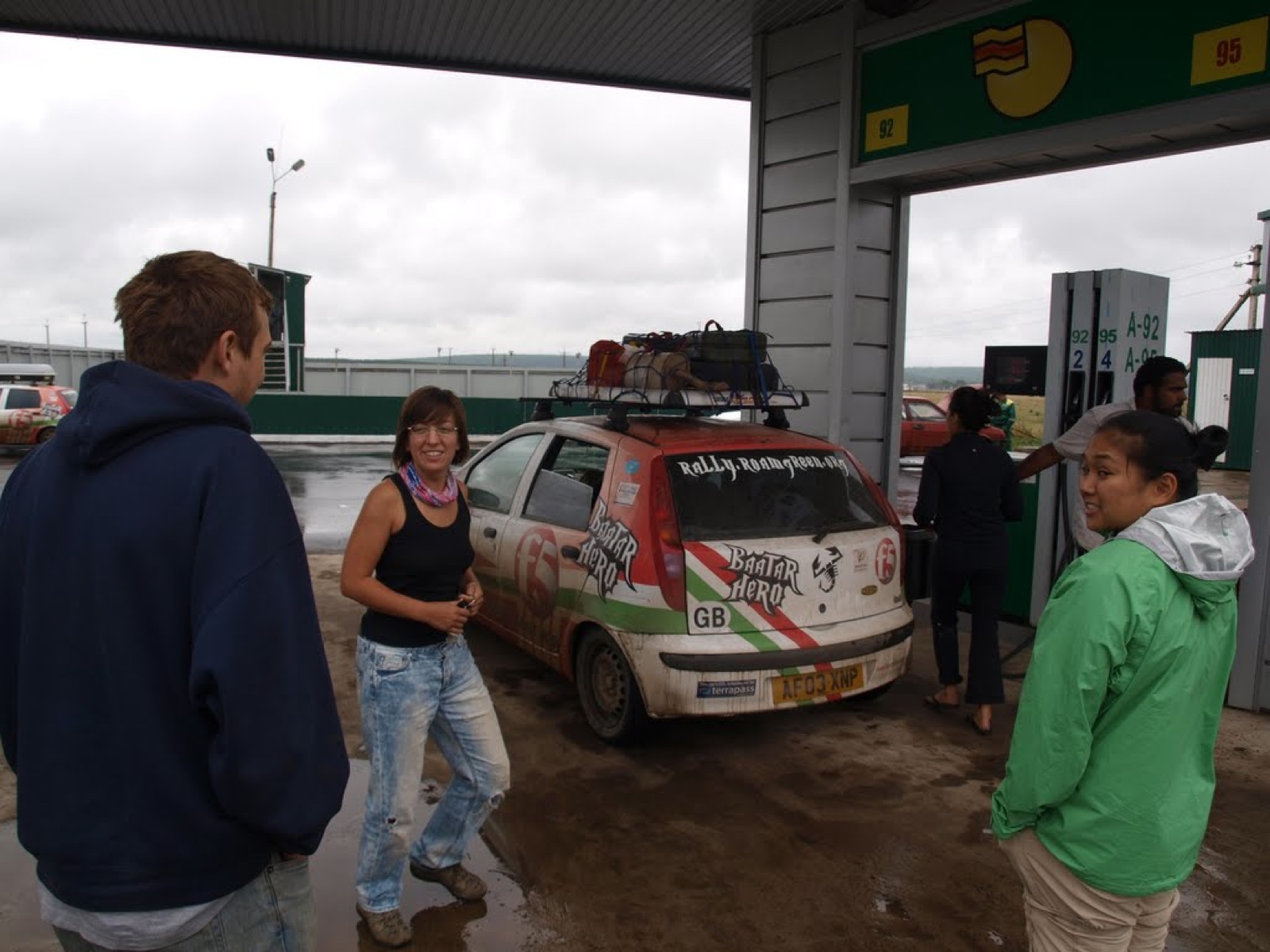 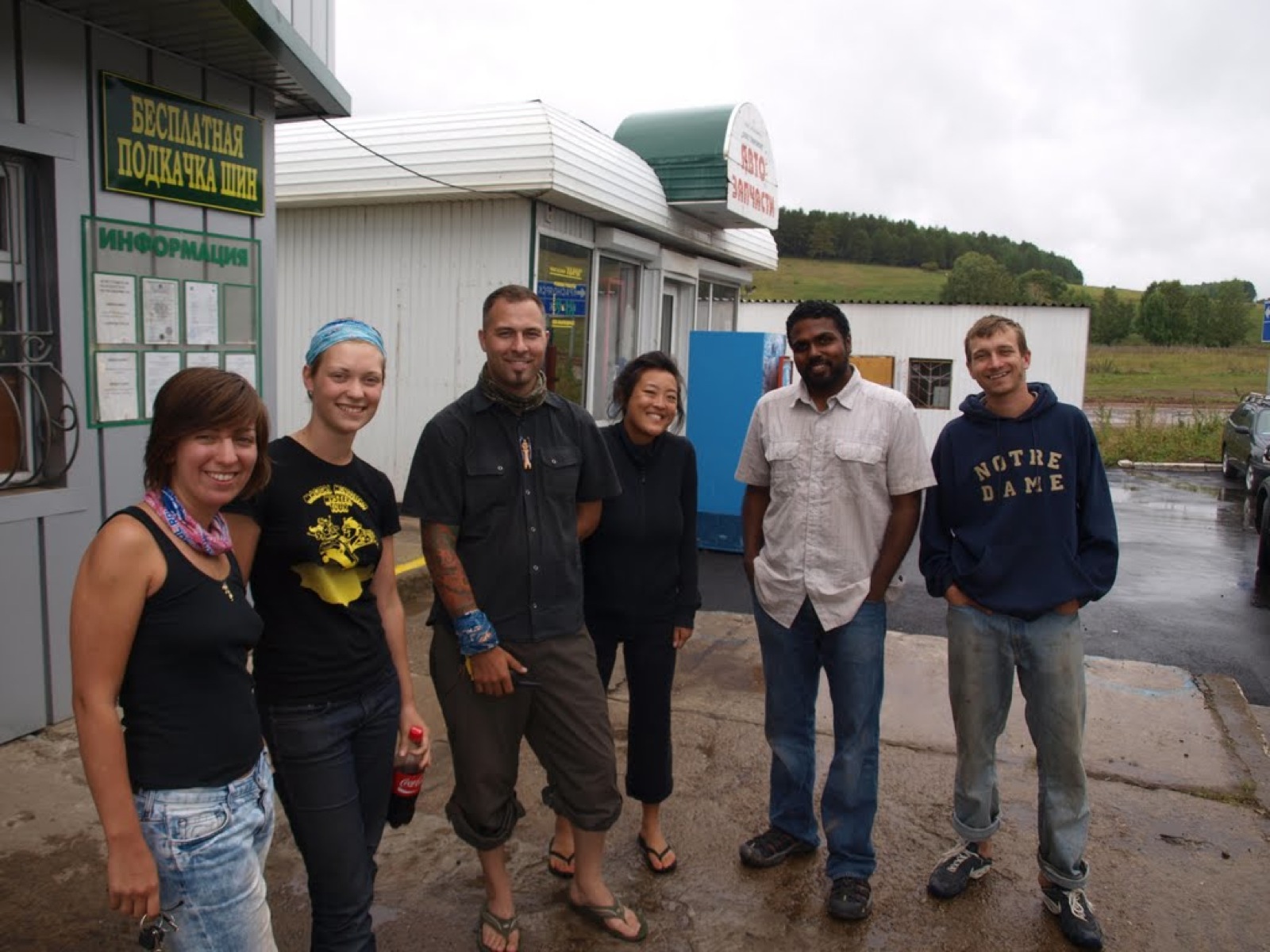 The new convoy of 3 cars pulled into the next gas station. Once again, we embraced our American brothers with whom we were apparently destined to travel. The Seattle team filled us in on what had happened since we lost contact with them in Azerbaijan. Apparently Kazakhstan did quite a number on their vehicles. Their cars were not able to withstand the strain and stress of the Kazakh “roads”. By the time they reached Krasnoyarsk they were in dire need of repairs with one muffler missing, one of shock absorbers done, and a brake pad completely shot. They spent three days in Krasnoyark fixing the car - an ordeal that included a free ride up a ski lift, a trip to the local banya, and getting drunk with local mechanics. 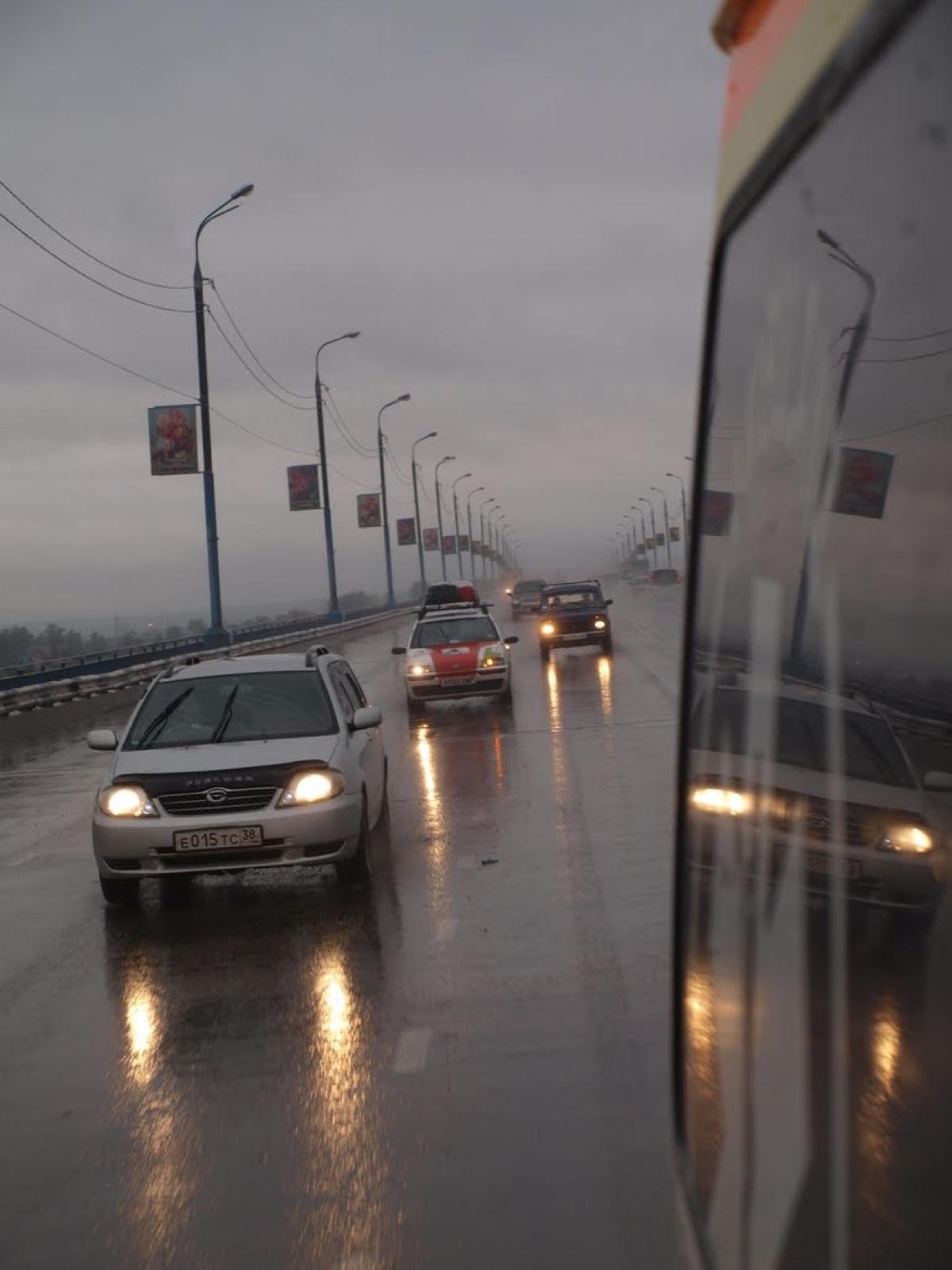 The convoy arrived in Irkutsk at around 8 pm - both teams absolutely exhausted. We stopped at the first identifiable cafe. Like an American invasion, we filed in and took up all available seats and tables. The menu looked sparse but at the very least, it looked clean. 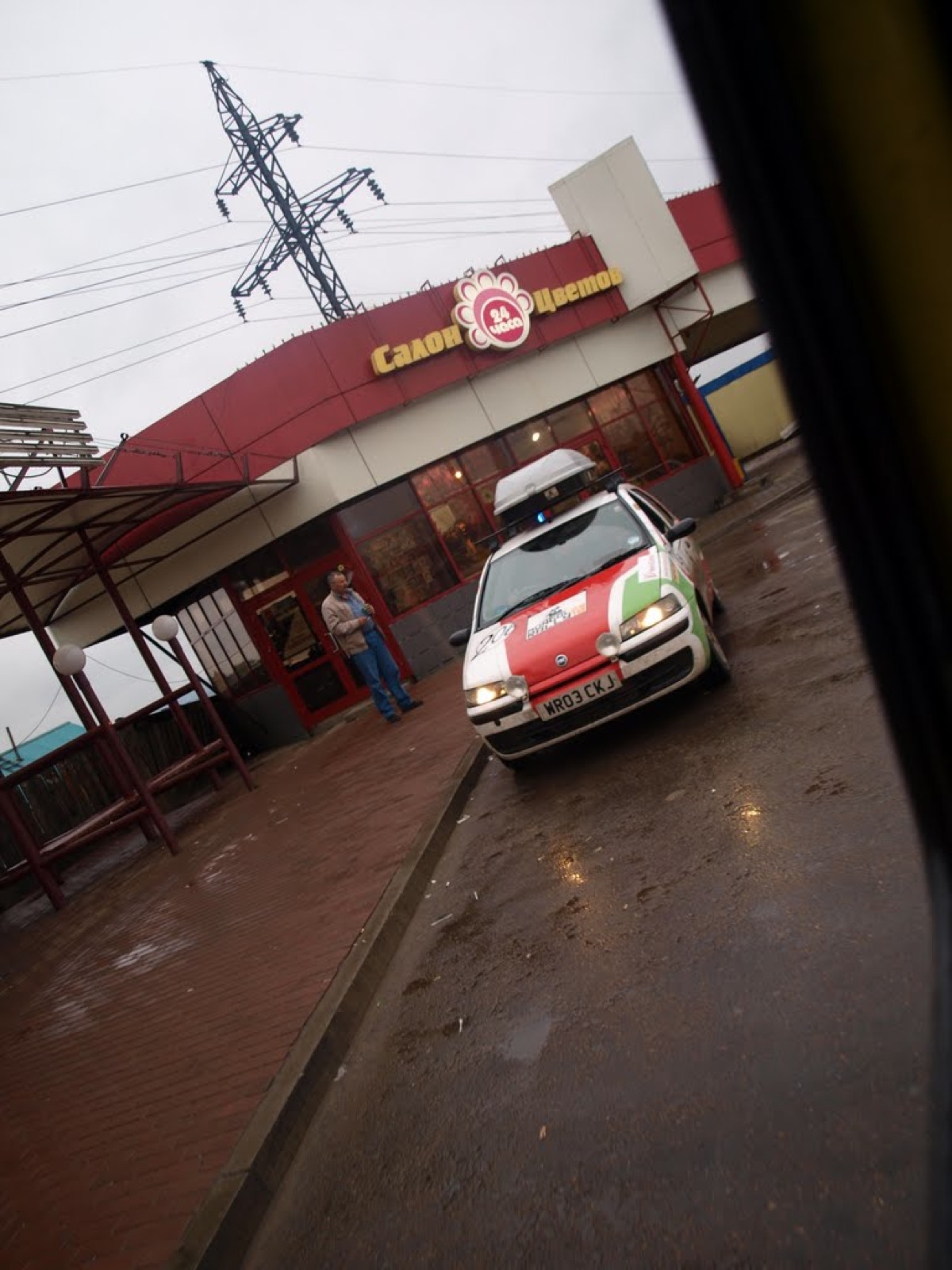 As the two teams chowed down on borscht and a mysterious hot pocket omlet dish, a russian from nearby table came over to ask us where we were from. We heartily replied “America!”. Satisfied, he returned to drinking with his friends. After dinner, the two teams sat in a semi circle discussing plans for the evening: drive on through the night to Ulan Ude and the Mongolian border or stay the night in Irkutsk. While we dicussed, the russian came back around and asked us if we would like to share a beer with him. Some of us heartily accepted. Some of us politely refused. Of course the russian spoke no english so came back with beers for everyone. After the beer came the wine. After the wine came vodkha. Not one to back down from an internationl offer of hostpitality, I took every cup, glass, and shot he put in front of me. In thanks I offer him a team tshirt. 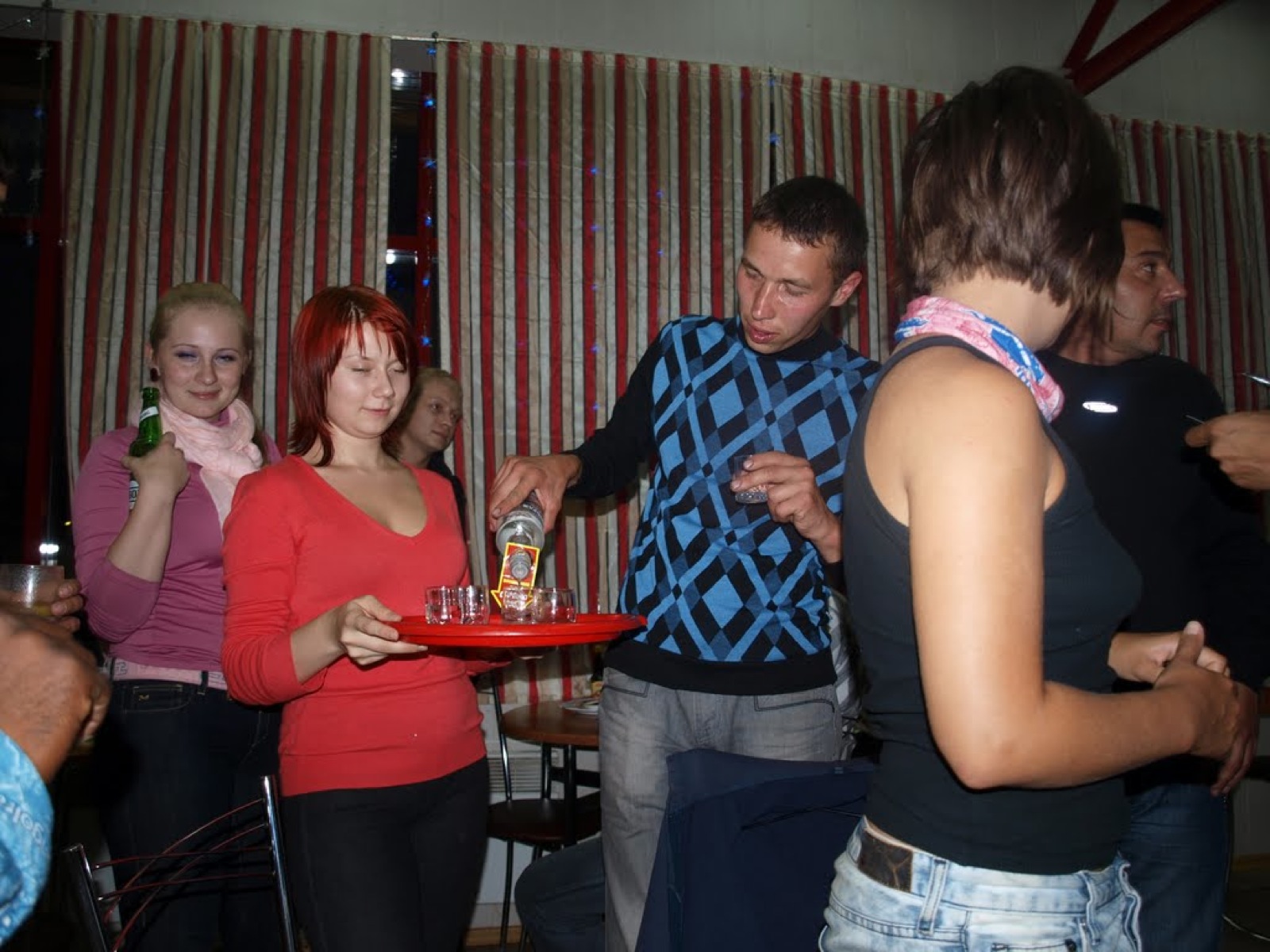 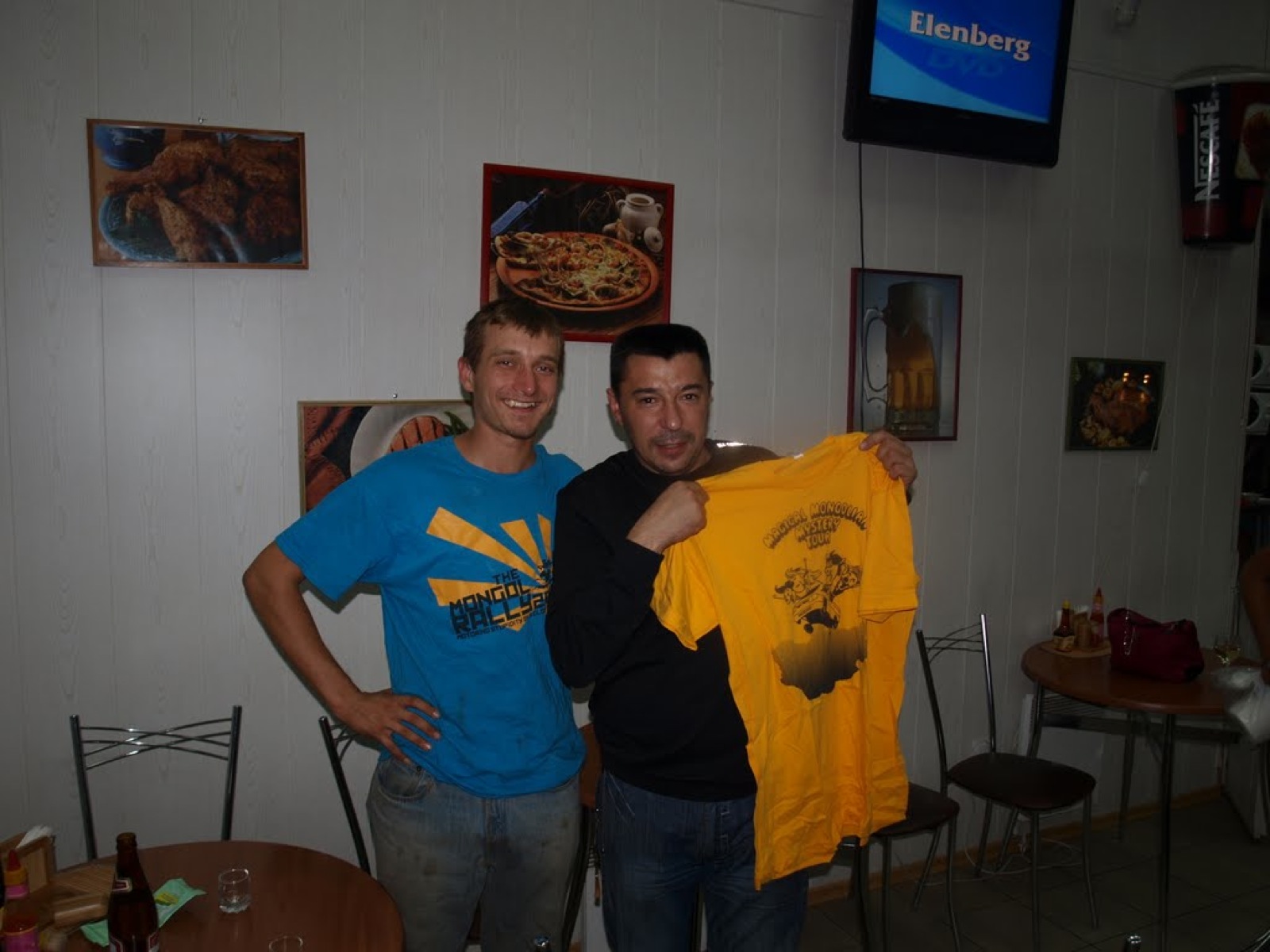 The whole cafe of Americans, Russians, a German, and of course the staff saw what was unfolding and the excitement spiked from a spontaneous drinking party to an international arm wrestling throw down. A table was cleared and two chairs set aside on opposite ends. I don’t recall who reffed. Neither do I remember much of what I was thinking. I do remember struggling against him for about….5 seconds. Maxim’s energy faded and I slammed him down. He tried again and he went down again. I felt invincible and unstoppable. I have heard that in polite international arm wrestling etiquette, you should let the score settle at 1-1 even score. Well I stomped all over that one. Not only did I beat this guy, I mercilessly beat his friend. Someone out there has a video of this. Hopefully I’ll be able to get my hands on it. 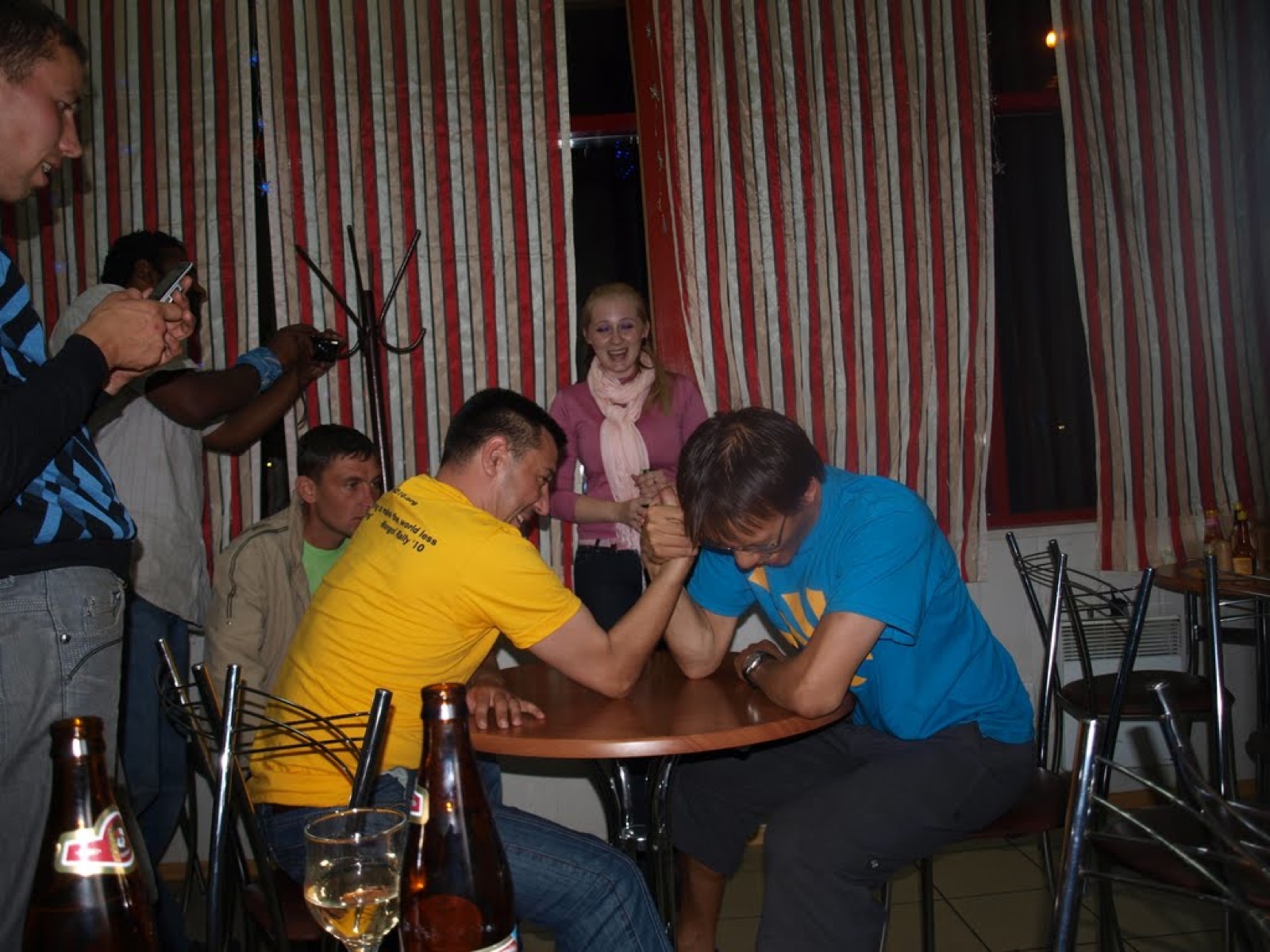 The arm wrestling silliness continued a couple more times. The night would go to the Americans: USA 3: RUS 0 and I was dubbed by Maxim “King of America.” 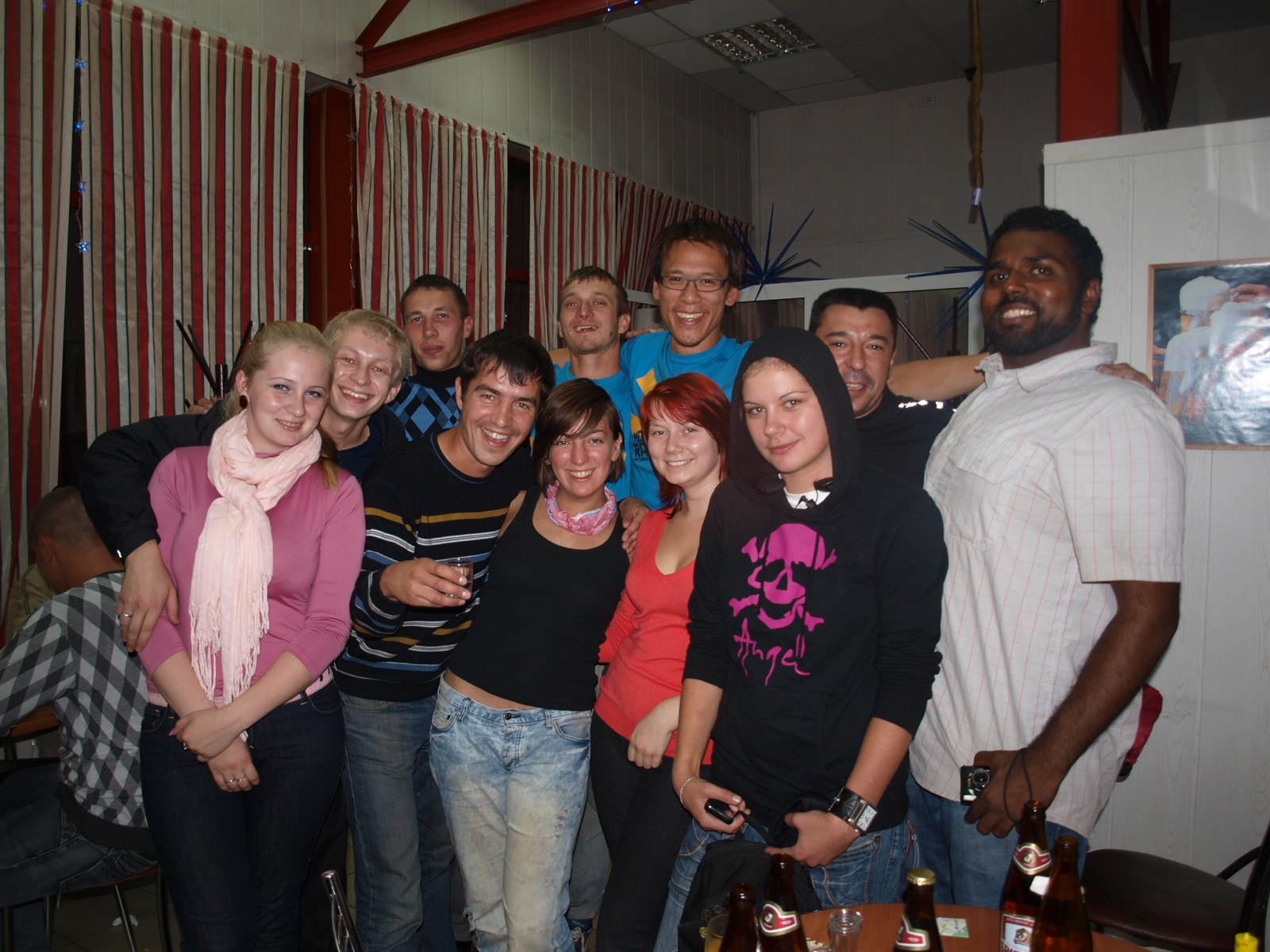