by Stephen Jan in Antigua, Guatemala

I haven’t been fencing much leading up to the rally, but I couldn’t miss the opportunity to bring my fencing gear and visit fencing clubs along the Pan American highway. 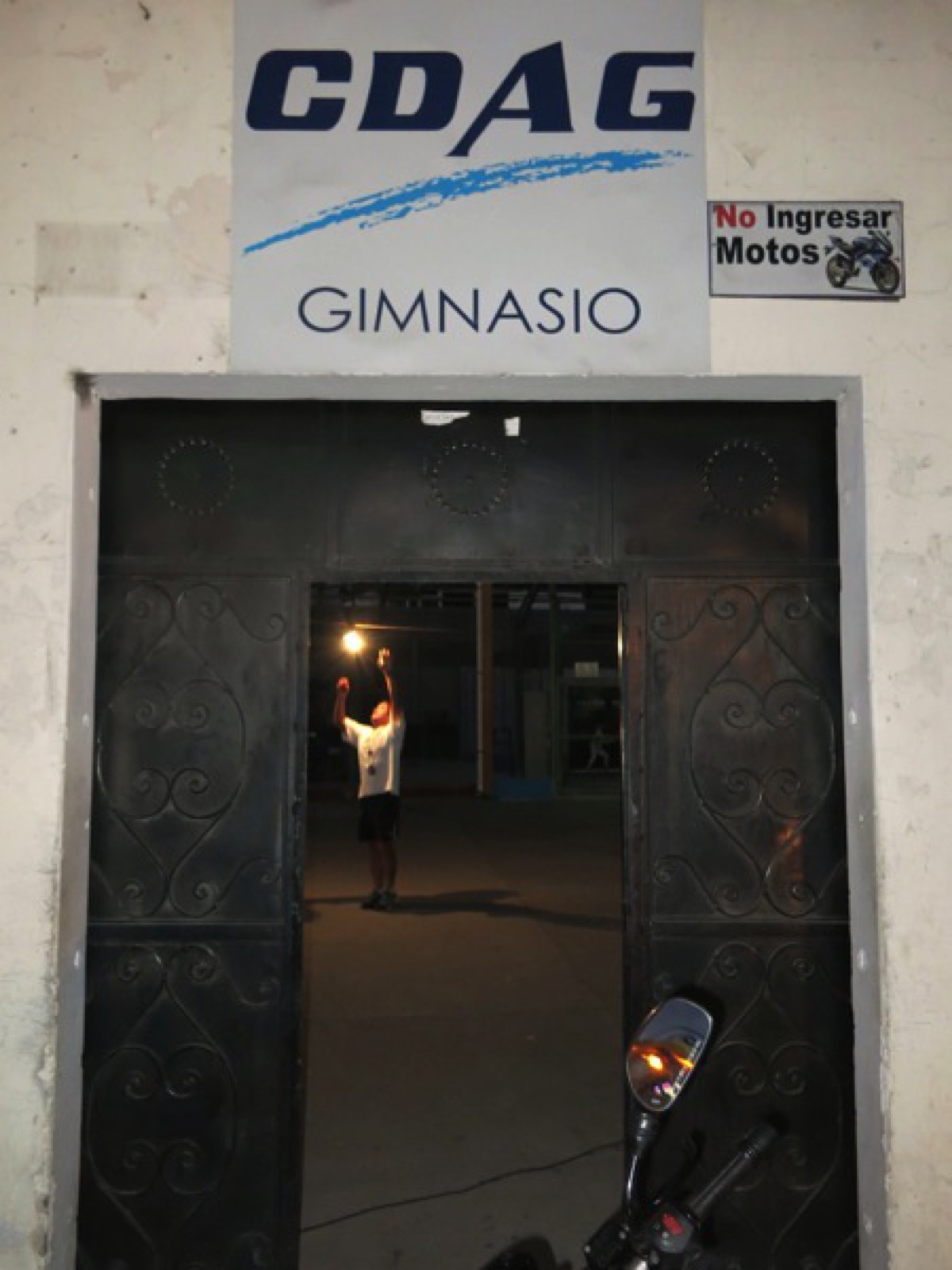 The first club we managed to schedule a visit was in Antigua, Guatemala. The Antigua fencing club is located at the sport center way over on the west side of town. This state funded complex offered facilities for many sports including basketball, football, and baseball - much like an university athletic facility. But like most American athletic facilities, fencing isn’t high on the list of sports to support. 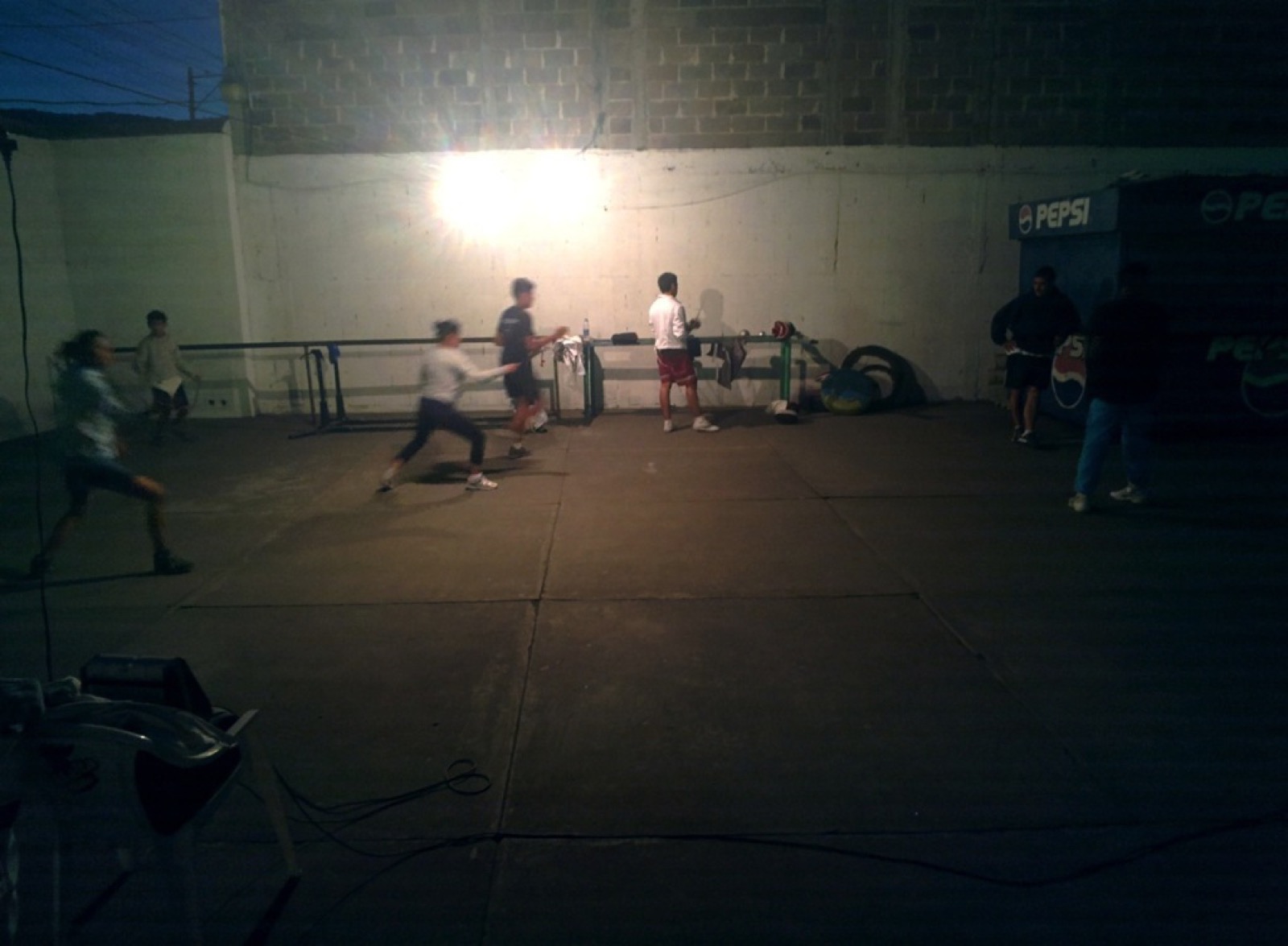 We discovered that the fencing team practiced out back near the rear entrance on a plot of concrete. If you’ve ever wondered what it’d be like to fence in an outdoor construction yard, you’ll find it here in Antigua. You might want to bring a flash light though, you’ll be fencing under 2 incandescent light bulbs strung up with duct tape and twine. Paul, Martha, and I all agreed that this was the most basic training conditions we’ve ever encountered. The Antigua fencing team was led by a man in his mid forties. The coach carried himself with an air of casual authority and expressed mild curiosity over our group. After politely welcoming us with a warm handshakes, he pushed us into the storage closet that doubled as a changing room. 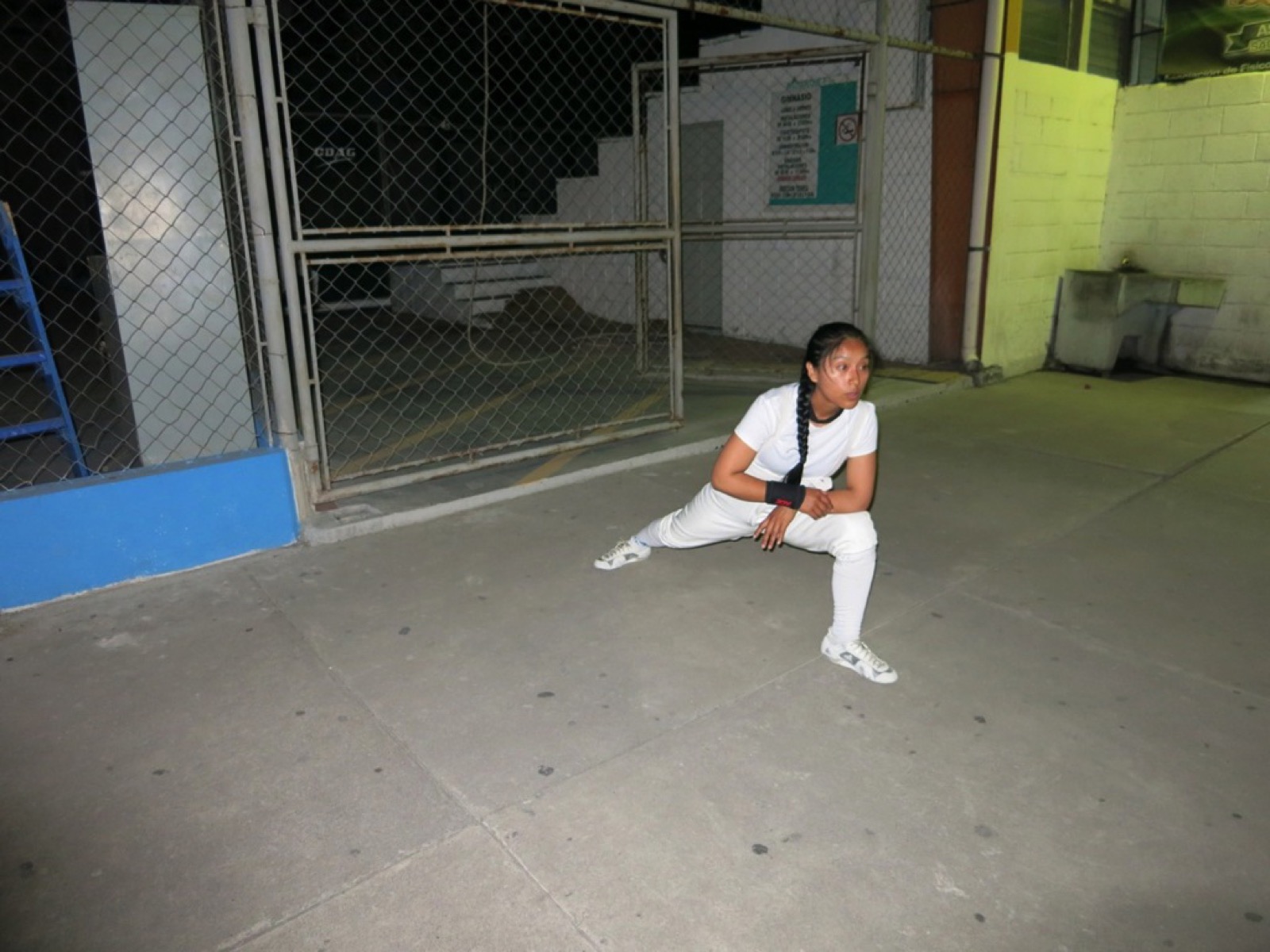 Having been on the road for nearly 2 months, I was pretty sure i wasn’t going to be fencing my best. It only took 3 minutes of my usual warmup routine for my muscles to start complaining. Paul looked at the field of Guatemalan fencers and anticipated that these quick moving kids, nearly a third his age, would easily defeat him. Martha, on the other hand, confidently ignored them. Instead, she was busy rummaging through her mental notebook trying remember how to fence. 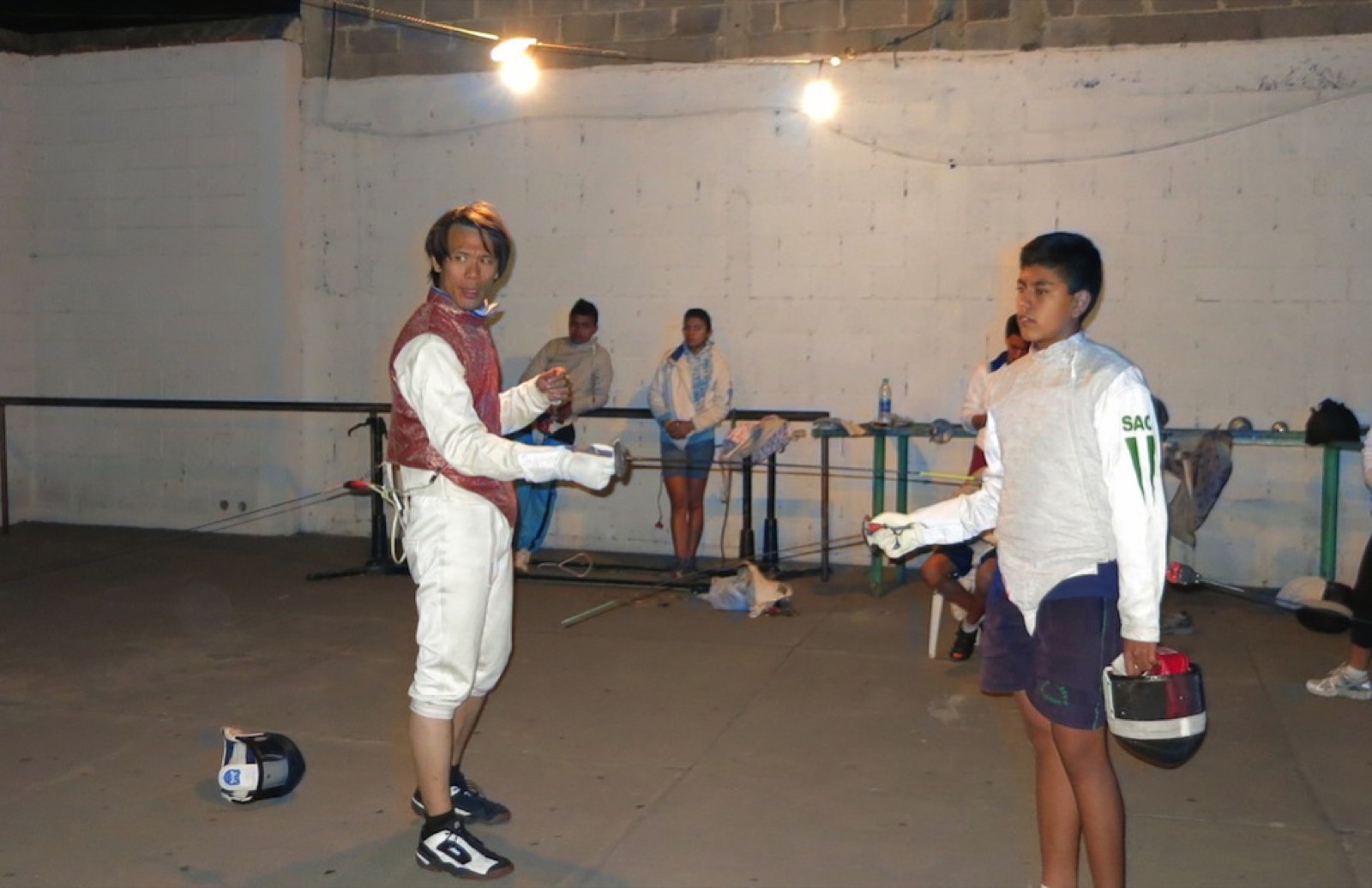 I stepped up first to face their first fencer. The piste was not marked with tape or anything so I picked the closest cement seam on the ground for the en guard line. Whether I started two feet forward or three meters back, no one seemed to mind one way or the other. The first Guatemalan opponent was a baby faced teenager not more than 16 years young. His name was Alejandro. 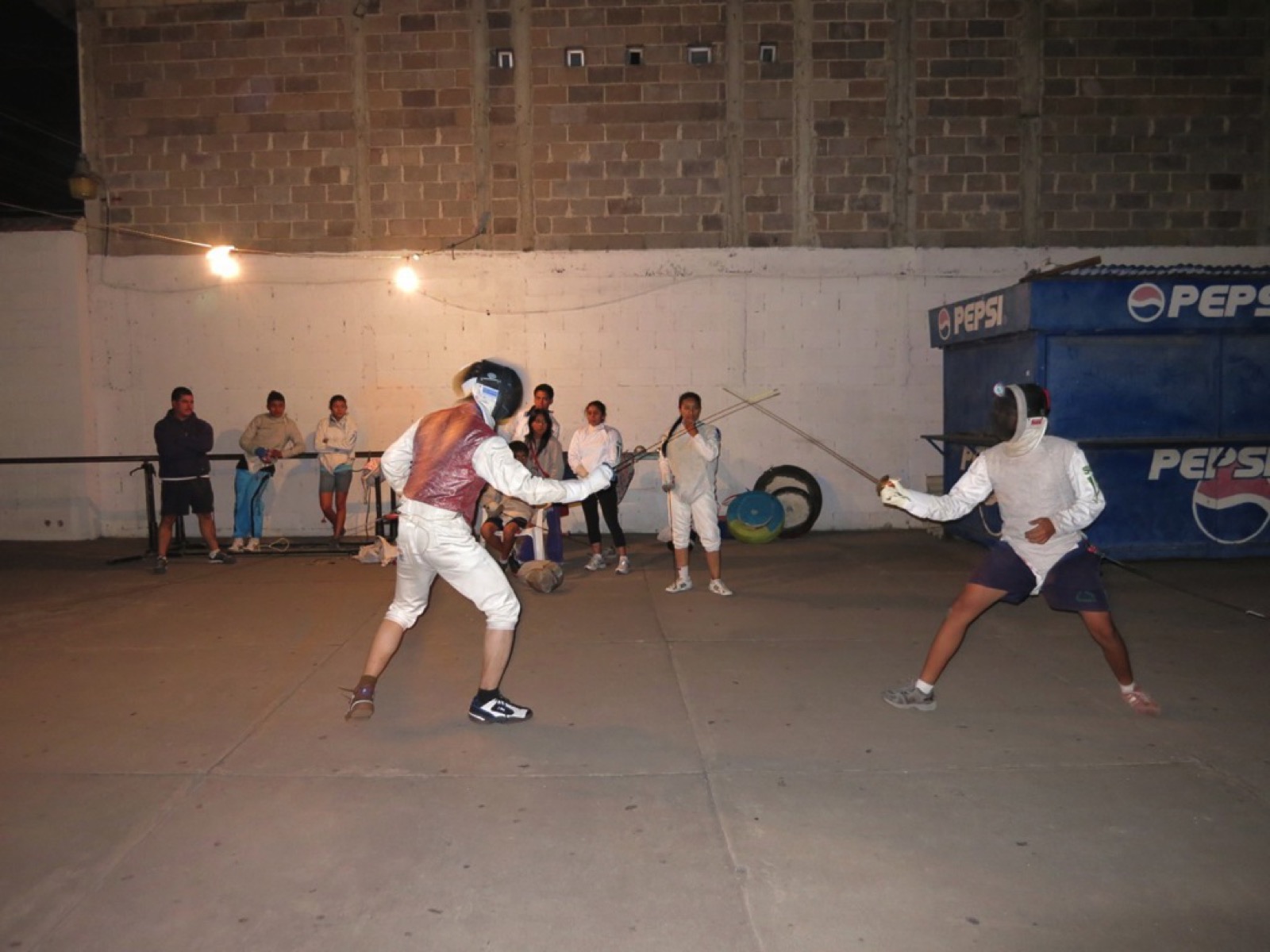 I started with a simple attack. He easily broke the distance and my attack fell short. Next, then he came at me with a start-stop-start preparation. If i was in better fencing form, the opening for an attack in preparation was definitely there. But with rusty legs, I kept a conservative distance to look for the parry. He pushed me a couple meters down to my side of the strip until he launched a deep lunge. 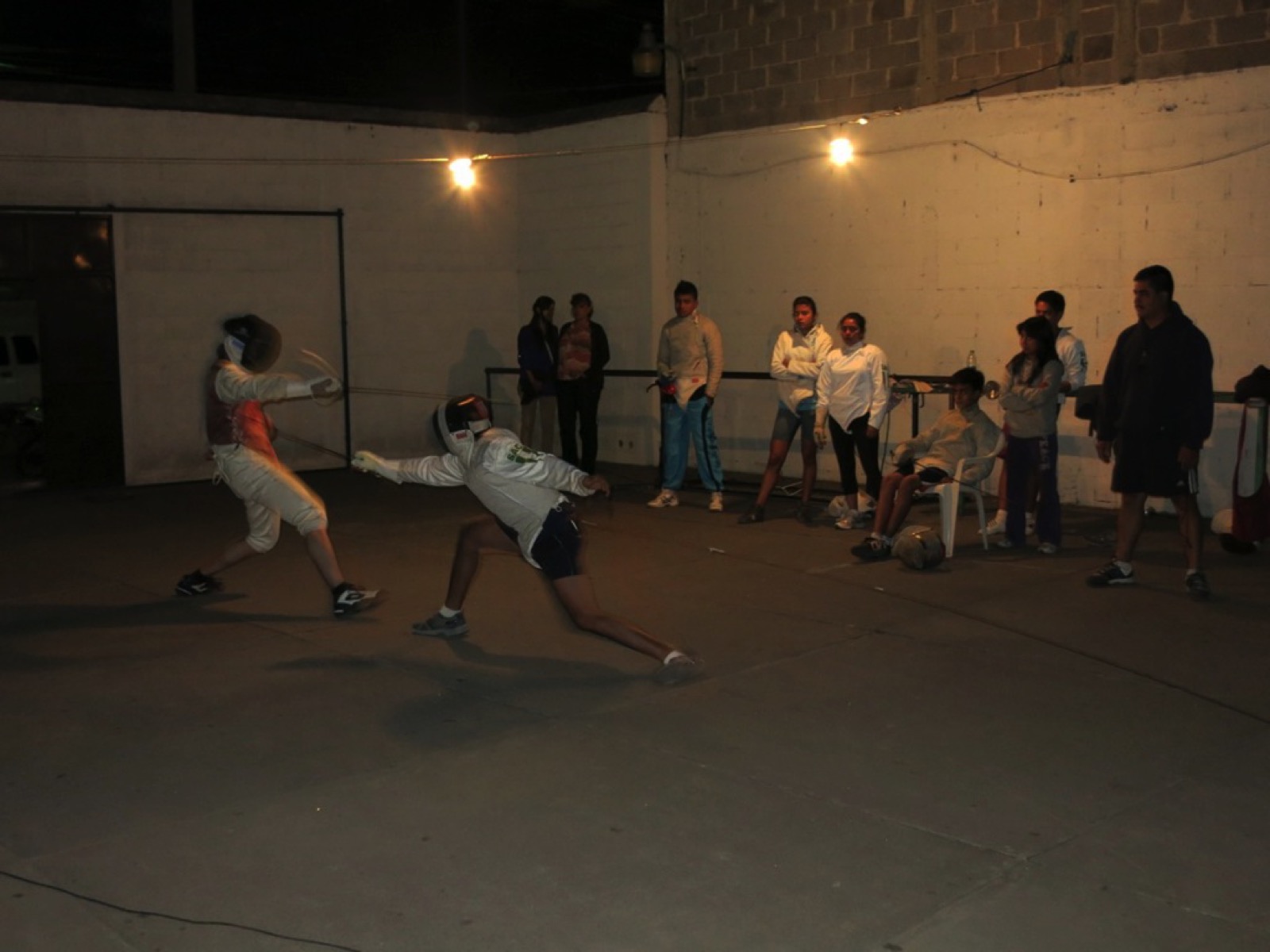 When the director called halt and a touch for him, I was surprised. He wasn’t moving that fast and I was certain I broke the distance at the last moment with a large retreat. I fence the next couple touches, struggling to understand how I kept misjudging distance. I repeatedly failed to reach him, while he was constantly catching me just in range. The score was 4-1 when it dawned on me that this fencing club was using pre-2005 machines. For those of you who didn’t know, the specifications for the machines were changed 10 years ago. I wasn’t expecting an old machine to resurface after all these years, but there I was, facing the up and coming Guatemalan fencer, in front of a pro Guatemala crowd, down 4-1. Maybe it was a calculated risk, more likely it was ego, but I charged at him with a huge preparation, hoping my muscle memory would somehow rediscover that legendary flick attack, phased out 10 years ago. He ducked, and I completely missed. My first bout on the Pan American Rally ended in defeat. Martha faced Alejandro next. Martha never fenced with the old machines so she didn’t notice the timing shift. Her problem wasn’t with the machines. Martha was having trouble remembering which foot moved first on an advance or retreat. As she struggled to find her footwork, Alejandro walked all over her with simple preparation attacks and parry ripostes. 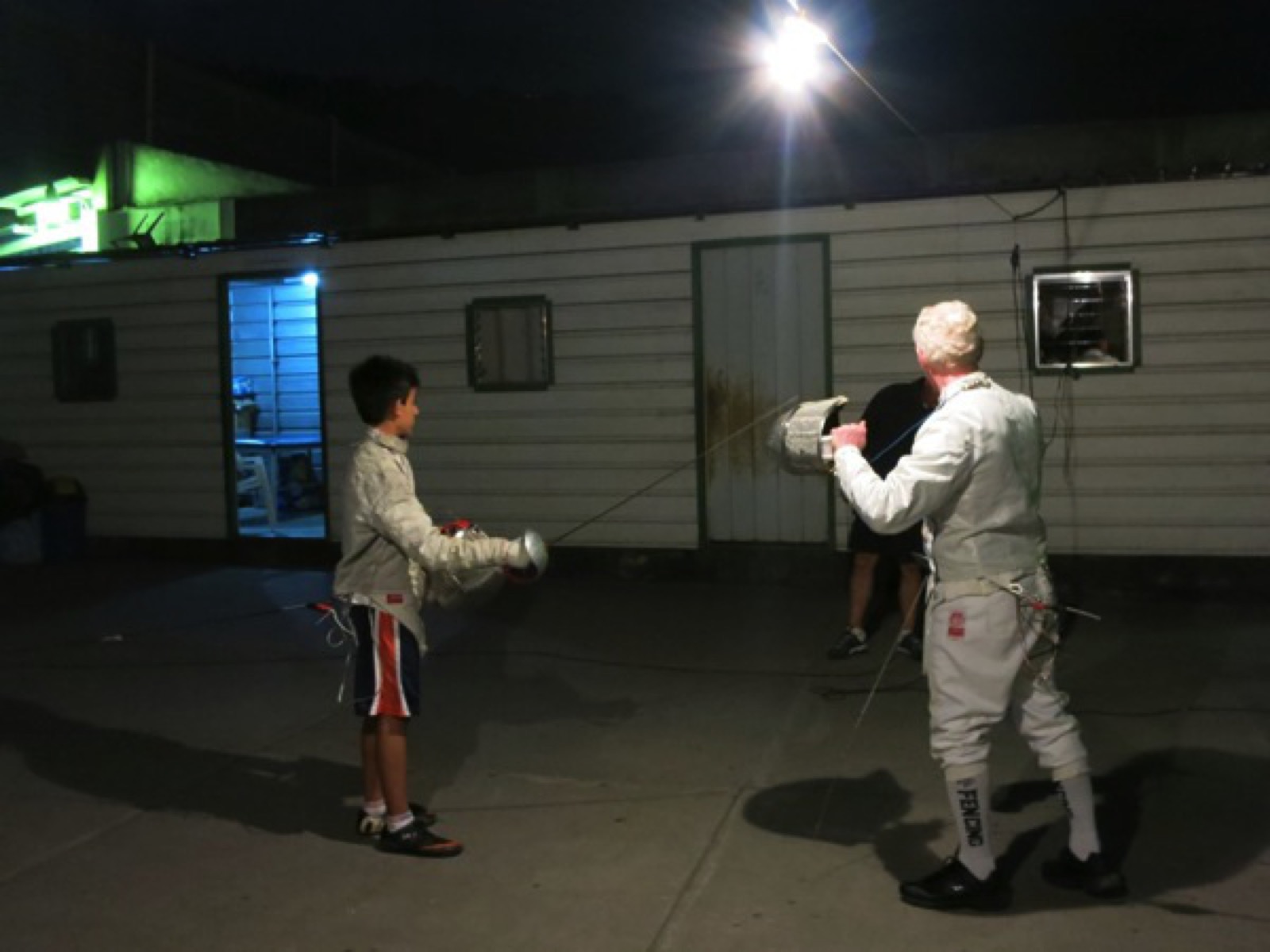 Next up was Paul. With a 0-2 record, it wasn’t looking good for team USA. Martha probably doesn’t think about winning and losing too much, but I do. I know little of saber tactics and strategy, so I can only evaluate saber fencers on athleticism and technique. Between Paul who just turned 59 and a 16 year old Guatemalan, with youth, stamina, and an explosive lunge, I was pretty sure our record would drop to 0-3. Not only did Paul win, he soundly defeated his teenage opponent. Paul later remarked that he too was surprised that he won. But mid way through the bout, he realized that while his opponent was quick moving and fast reacting, he didn’t have much of a game after his initial fencing action. 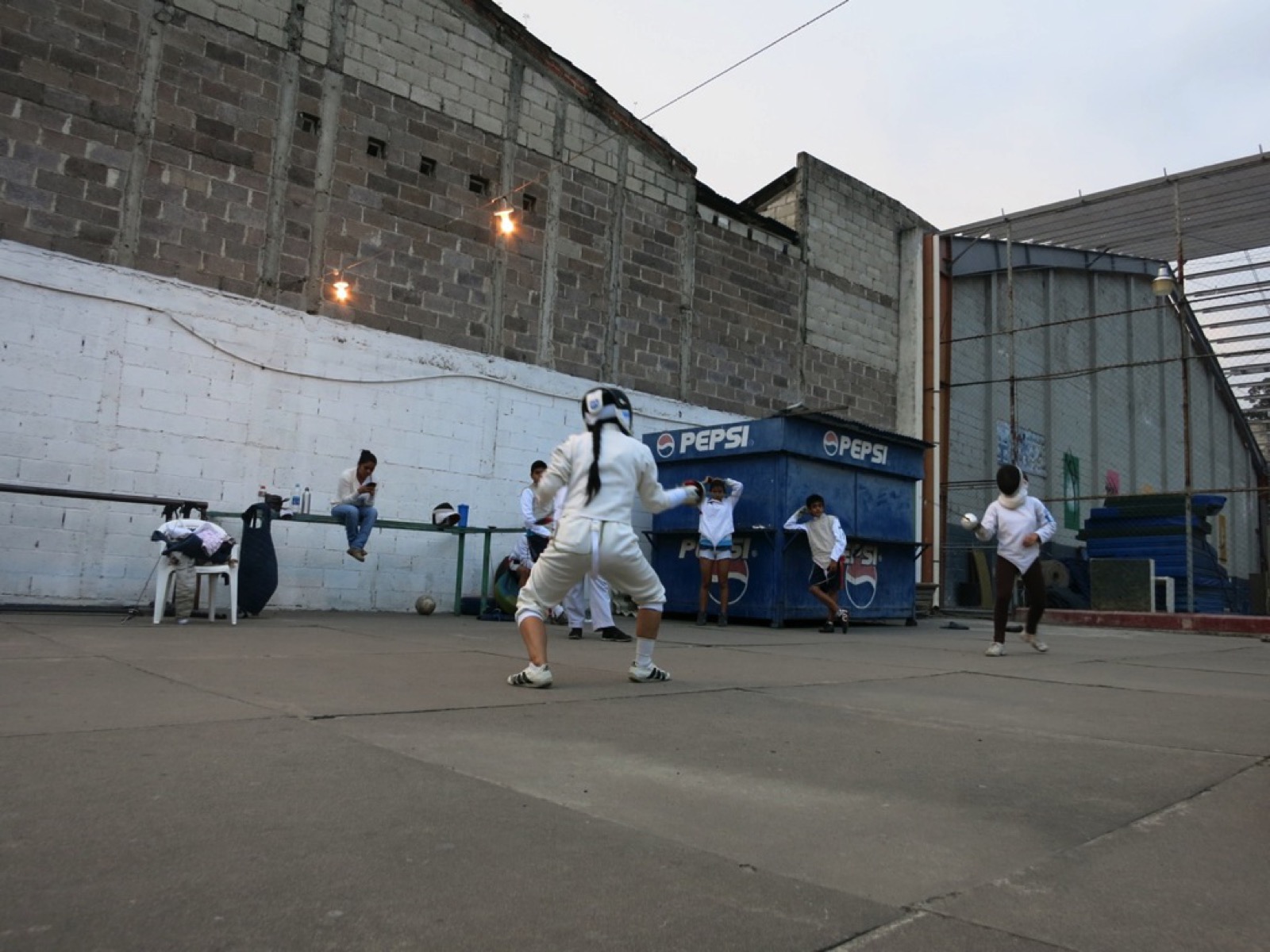 The three of us rotated in a couple more times. Martha was cajoled into fencing epee. She ended the day with a combined record of 3-2. Paul fenced both saber and epee, ending the day with an undefeated 5-0 record. I started my rally with a 3-1 record. 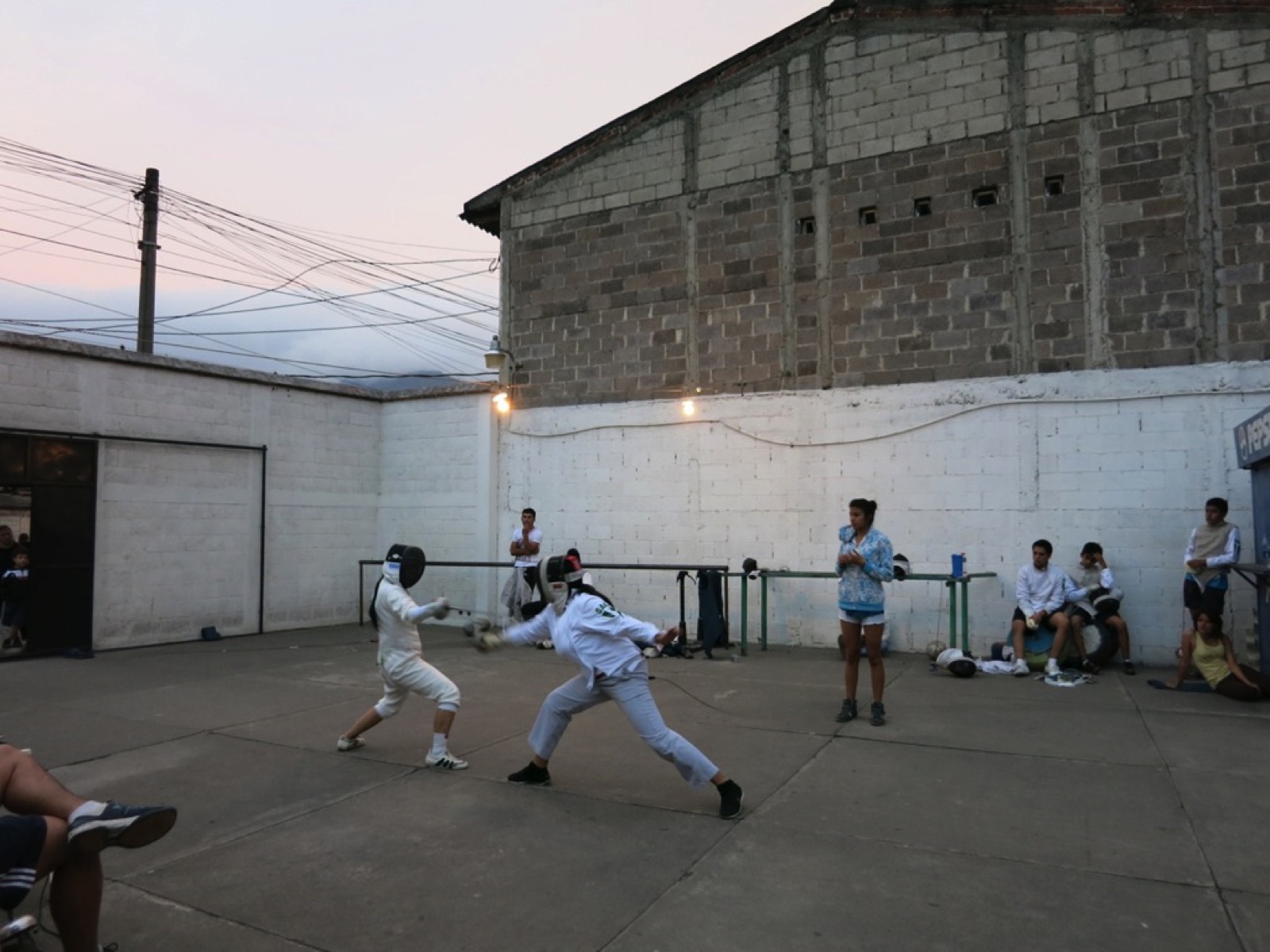 For me, the first day of fencing after months of travel was a struggle. The combination of dim lighting, old machines, and low stamina created a perfect storm of excuses for defeat. We returned the next day and faced them again. 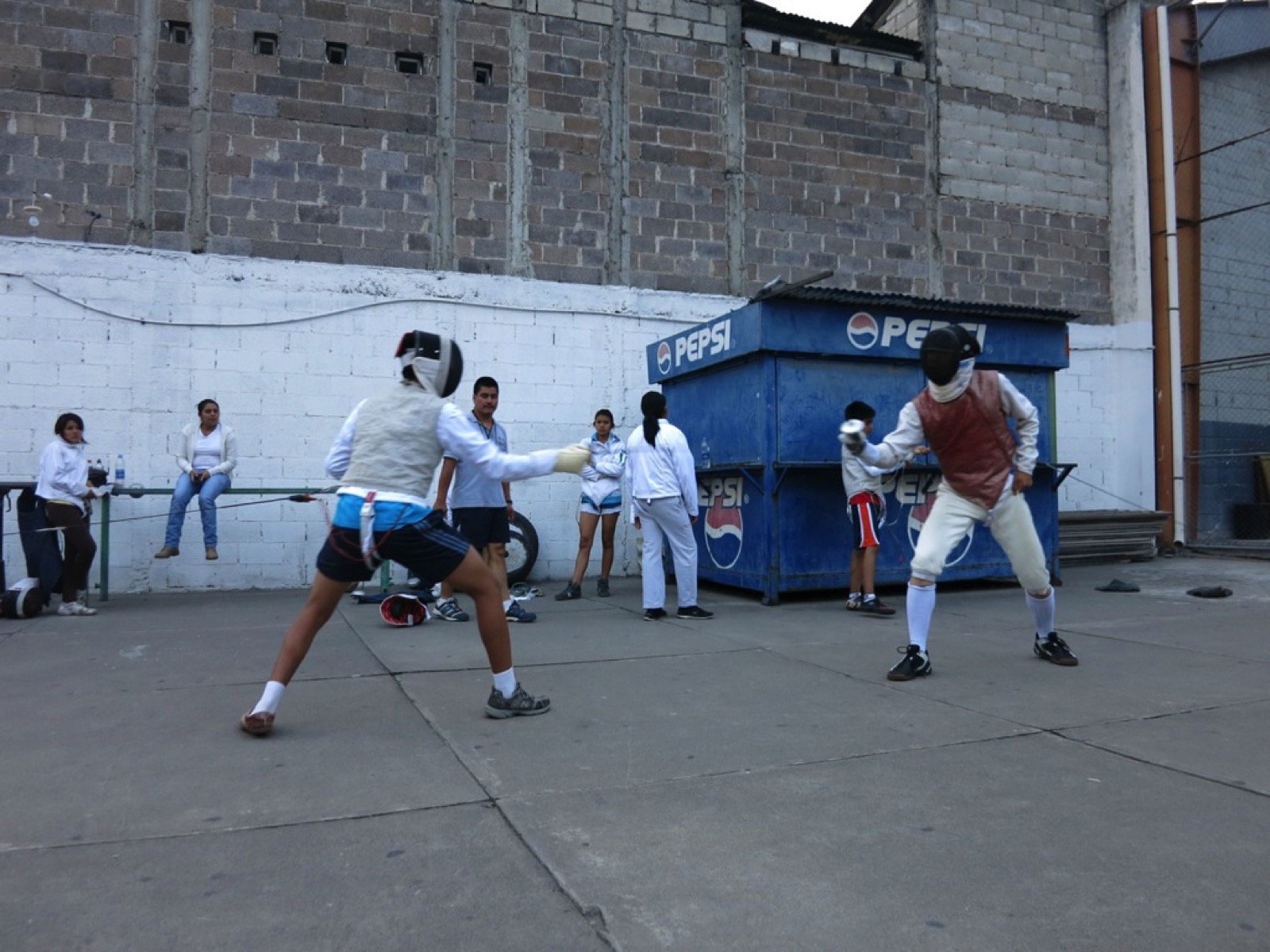 This time, I knew what was coming. Recounting my bout from the day before, I noticed several things about Alejandro’s game. He always parried a deep 4 with a turn, and he lunge to the flank with a turn. His panic action was a duck. His preparation wasn’t smooth, a tell tale sign of uncertainty and unreadiness to finish. With a clear sense of his actions, I was able to completely dismantle his game. On day two, their star pupil Alejandro struggled to score one touch against me.

Word had spread about Paul Rosenthal, the 59 yr old American gringo fencer who could not be defeated. One saber fencer who wasn’t present the day before showed up looking for Paul. Edgar wasn’t a teenager. He looked to be in his mid twenties and appeared to be in peak physical shape. Unfortunately for him, Paul didn’t come. Overnight, Paul came down with a 102 degree fever and was bedridden all day. 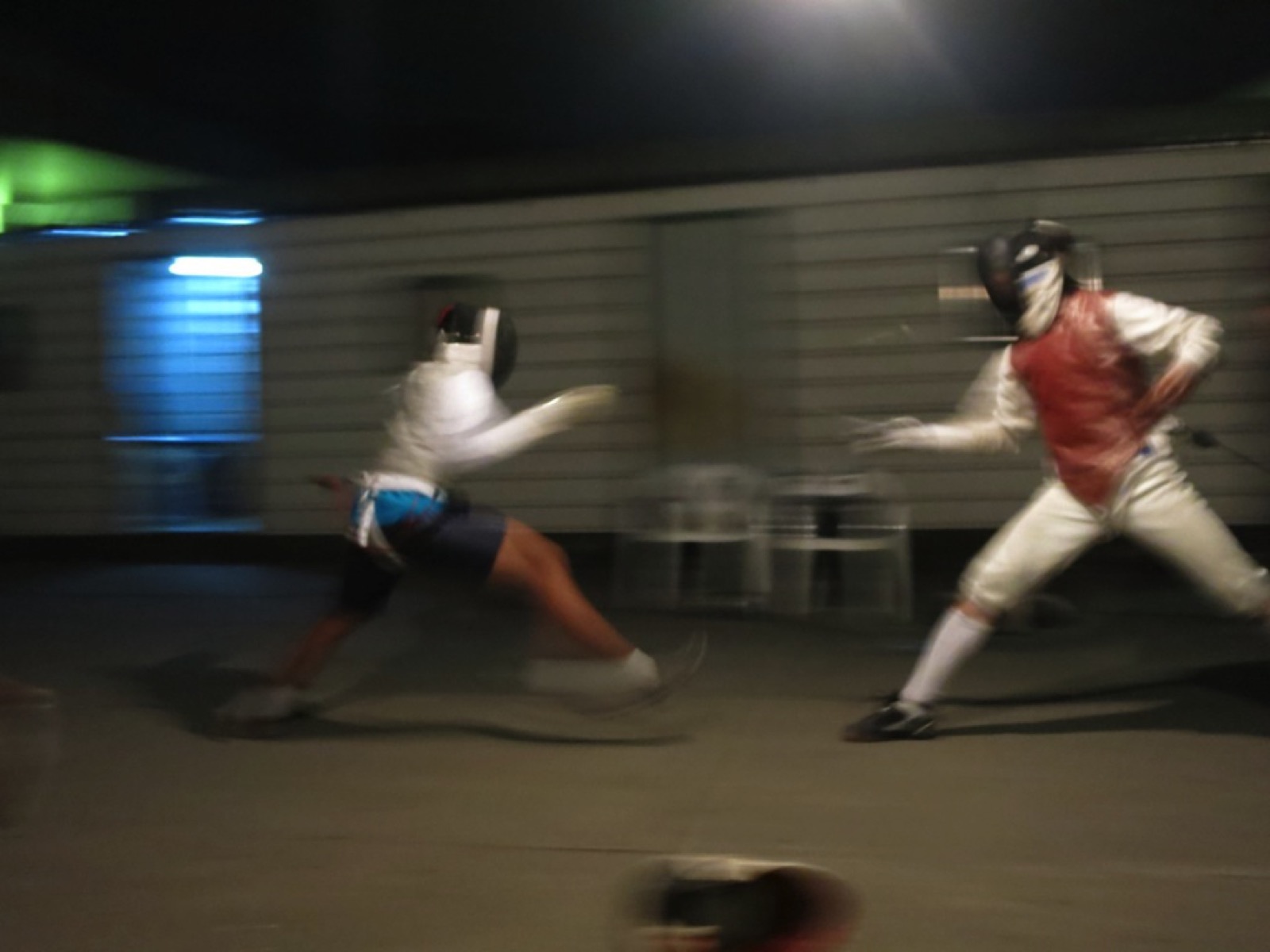 Despite Edgar’s wish to take down the great Paul Rosenthal to restore the honor of Guatemala, he was relegated to fencing me in foil. True to his saber roots, he had zero point control, and was soundly defeated. The cumulative record in Antigua was 19-7: Paul: 5-0 Stephen: 9-1 Martha: 5-6 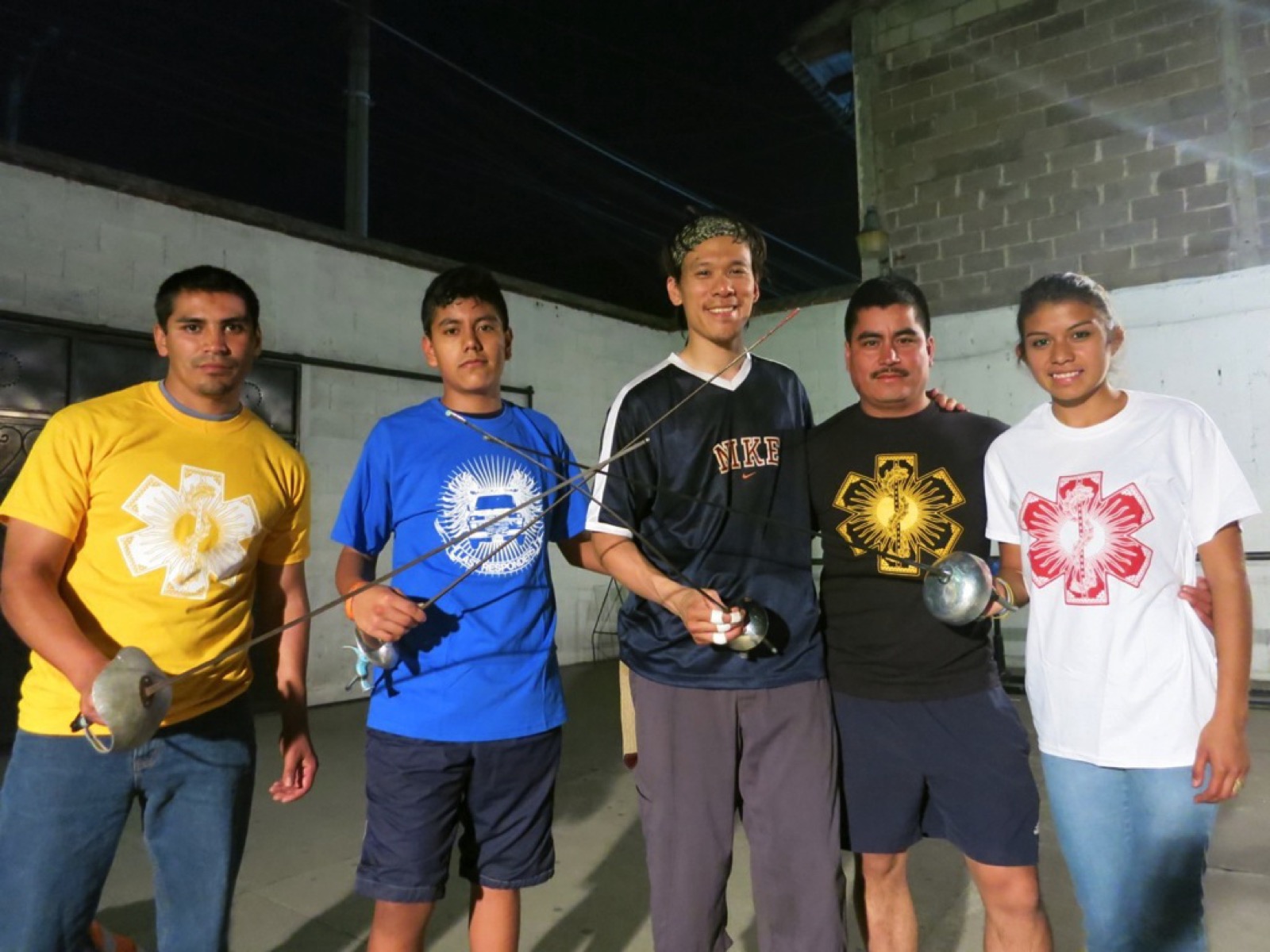 We had a lot of fun at the Antigua fencing center and were honored to have been welcomed the way we were. They even offered to have us along on their bi-weekly training exchange in Guatemala City. Although they didn’t have the best facilities, they demonstrated a great deal of enthusiasm and dedication to the sport. We were all impressed, even the great Paul Rosenthal whom we had since dubbed the Undefeated One.