by Tom Dorwart in Baku, Azerbaijan

Baku It smells and Judy and Tom cannot hold their food. Let’s get out of this city. Things are certainly a little less enjoyable, and sleeping in the back of a muggy ambulance loses its luster when you’re sick. This is where Pete, Mark, Francesco, and Daniele come in. By the time our team got to the port in Baku all four of us were reeling from the aftershocks of some mystery Azeri salad. The lonely planet guide had recommended a place called cafe Mozart. The place looked inviting, but looks this time were deceiving.

Meanwhile back at the port, we formed what would become a superteam of Western powers - Italy, Germany, the UK, and the US - that even the corrupt, lazy, and disorganized Azerbaijan customs police couldn’t bring down. Daniele - after hours, even days, in the port and being led on and prodded for money by the police - said “I will never come back to Azerbaijan.” he paused and then changed his mind…. “if Italy ever go to war with Azerbaijan I will come immediately. The first place I come is the port.”

Sure, our minds were boggled at the backwards inefficiency and the silent acceptance of it by the locals (locals waiting to take the ferry slept in a concrete makeshift shelter with no walls next to a rectangular pool of human urine). But… we come from lands of football - American and soccer - and rugby. Lands of beer, barbecueing, and camping out for fun. And it’s a good thing our creative group of 8 doesn’t get bored very easily.

We became usuals at a local market, since we would buy supplies and cook as a group during our days in the “Baku port foreigner refugee camp.” We actually had to use two different markets because we had bought one out if all of its beer and water.

It’s unbelievable how much fun you can have in a shoddy parking lot. The Italians - frannie and Danny - cooked pasta and tomato sauce with either tuna or salami and made sure before each dinner to point out that what we were about ti eat wasn’t real Italian pasta and that we would all have to come to florence and Siena for the real stuff. But with all its inventiveness and carbohydrates, it was delicious even if it was baku pasta and mystery meat.

We passed the time by tossing around a football, playing a rugby catch game, and bunping and setting the soccerball as a volleyball. We got stares from the grumpy guards and kept playing. Stephen played his ukelele, we drank beer, and we sang. Maybe they’d realize that no matter how hard they’d try they could not break our spirits, and maybe some of our enthusiasm would rub off.

A little aside on Baku, its make-up, and the landscape since we spent so much time there, nearly adversely possessing our refugee camp land and only perhaps another few days from being eligible to apply for - God forbid - Azeri citizenship.

With a terrible road system and in some places a non-existant sewage system, baku was far from DC or Nebraska. The biggest treats there were finding bread to eat, cold bottled water to drink, and a semi-clean, semi-functioning toilet to use. The entire country, including the oil rich capital smells like sewage, and you were always within a five minute walk of dire poverty and slum-looking shacks and, in the other direction, tiffanys, gucci, or saks fifth avenue stores. Everything is expensive here, but there seems to be no middle class and no distribution of the oil riches… The rich have and the poor have nothing. The roads into Baku, the capital, are treacherous to say the least. Paved road meant rubbled asphalt and two or three-foot deep potholes. Most of the main highway was a bumpy, windy, grinding dirt path. Emaciated cows roamed freely in front if cars and stared right back through the windshield even when we honked.

We saw luxury condos and five-star hotels near the port, but a short walk down the street shows old men pushing carts all day for probably several cents a day. Old Baku with its medieval wall and castle was neat to see, but the city itself was not pretty. Our camp… It was beautiful. 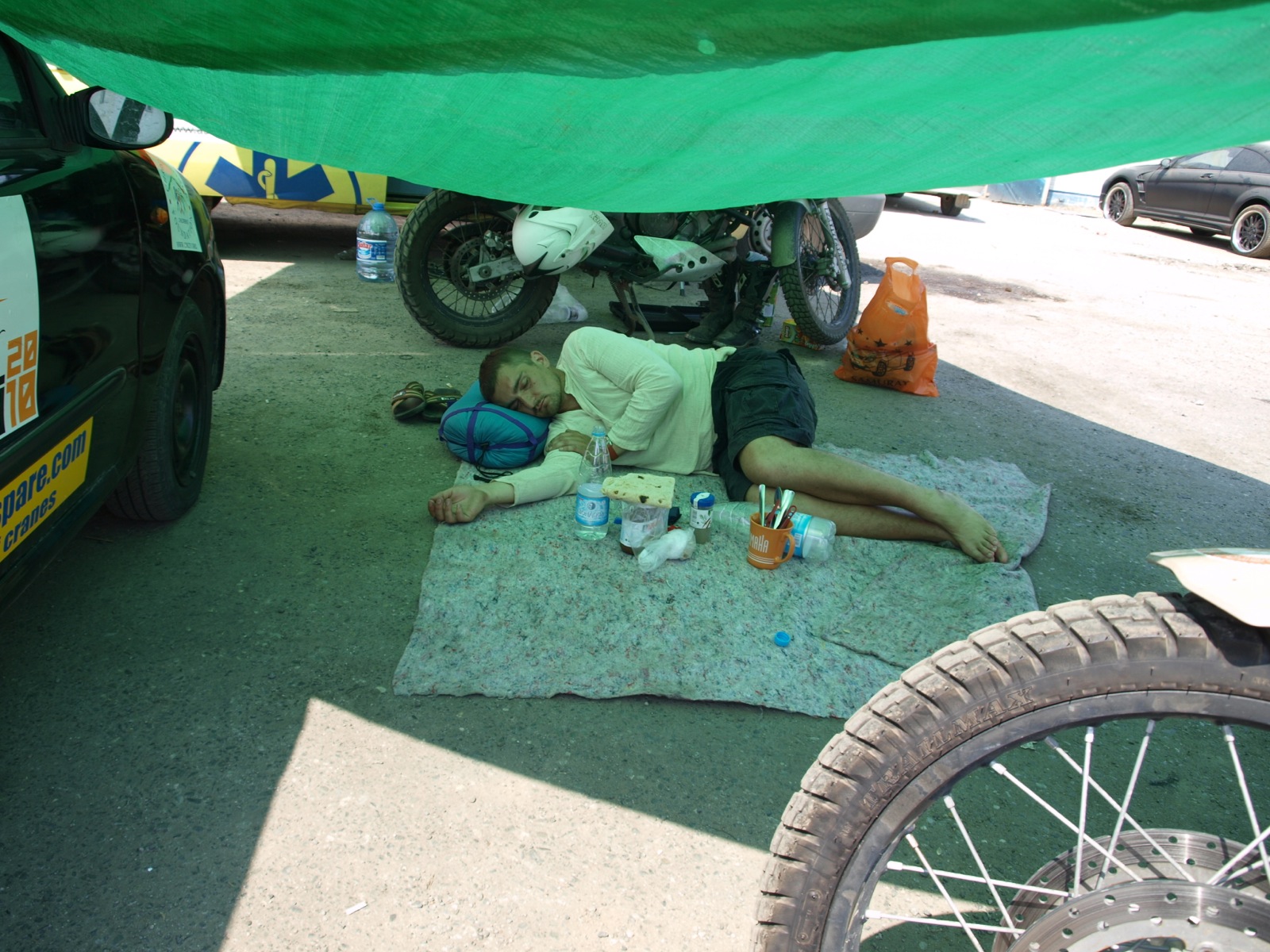 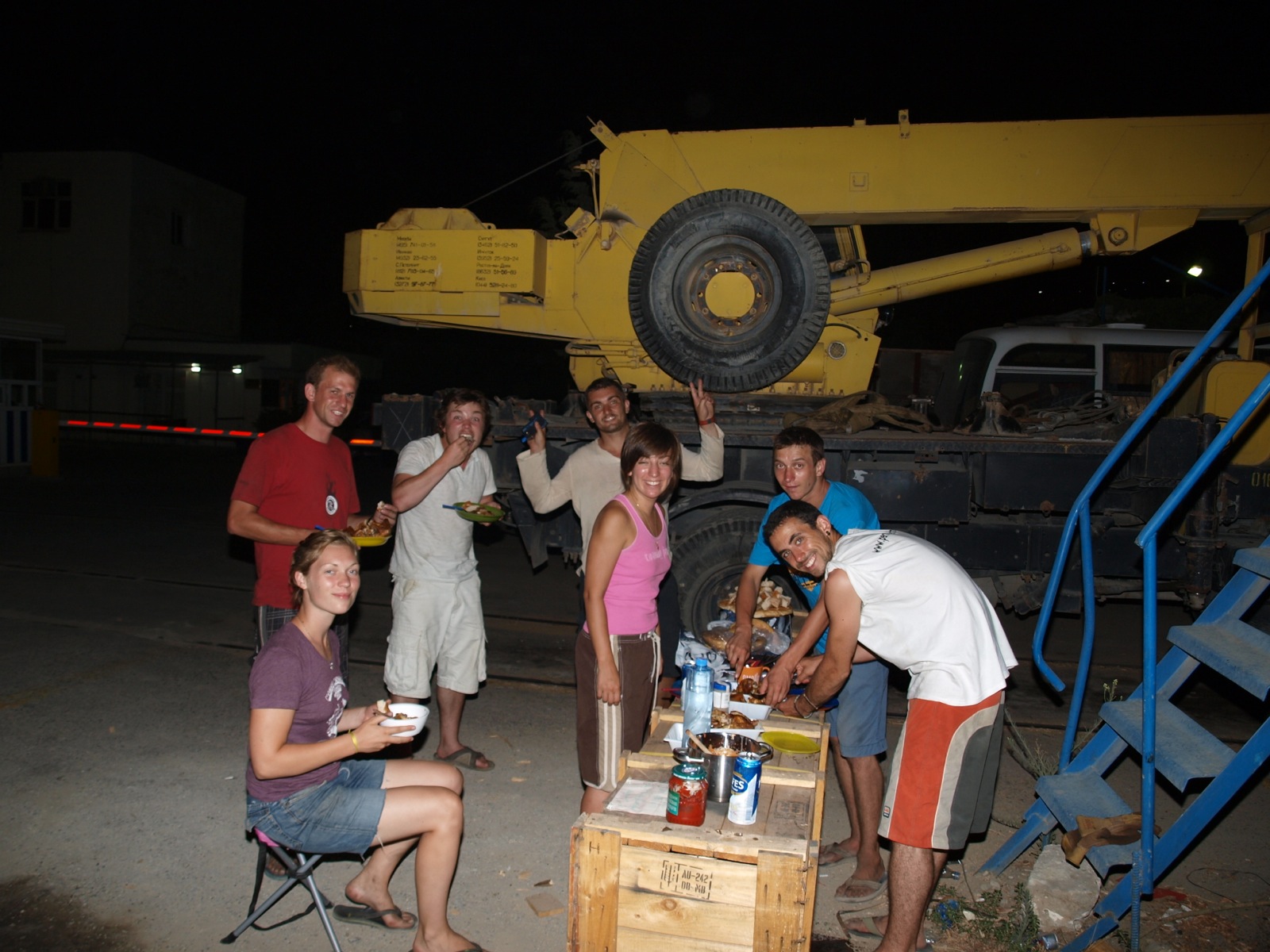 Ok, back to life in the refugee camp: Luckily we ran into four Italian motor-bikers biking to either Tajikistan or Uzbekistan. One pair needed the ferry to turkmenbashi the other to Kazakhstan with us. As I mentioned, we also met another mongol rally team, Pete and Mark, from the UK. They are driving ‘divine fiat’ and going our route through Kazakhstan. No one, not even the ticket guards, had a clue when the ferries came or went. Except for the rich - who could, we would later find out, pay to find out, show up a few hours before, and hop right on.

At least we could all wait it out together, our newly formed anti-baku port team and at least, we are heading the same way, up the west coast/border of Kazakhstan to Byneu another oil city.

The roads to it however are supposedly either non-existant or treacherous. Other teams we have been in contact with have told us the potholes are like ditches and when it rains, the roads get muddy and impassable.

The guards told Pete and Mark, who had gotten here to the port the night before ‘maybe 10am’ the ferry will come. It was a game with the guards, and maybe was their favorite english word. We got to the port - which consists of shacks and holes that serve as toilets- at about 1 in the afternoon. The guards then told us maybe 6. At 6 we checked and we were told maybe 10. It became clear we could be in for a long wait and that this was somehow normal for these border guards. They weren’t the friendliest of folks and they got angry every time we checked in.

We, and our six new friends, bought lots of efes, a Turkish beer, whipped out our tiny grill and made the group some Raman noodles. Several team members slept in the guard shack and Judy got her feet tickled by a Huard in the middle of the night. The sun set, and rose, several times and while our camp - next to stray cats, turkeys, chickens, and geese - was far from the luxuries of western Europe or the US, it was brilliant ( as our British mates would say). The food tasted delicious. The beer was cold from a makeshift cooler Daniele had made. An impromptu game of volleyball broke out with a soccer ball, or football depending on your nationality. And the guards in their fancy uniforms watched us in our surprisingly good spirits. They mustve thought we were nuts. But food and good people bring people together - even in a smelly, humid port in Baku, Azerbaijan. And at least we had those.

Third update from Baku / Kazakhstan The past week has been as humbling as it has rewarding. Each day has its ups and downs. But we each got through this gruelling, challenging week because of each other. When one person was down others would lift him or her up. Francesco and daniele were always in good spirits even when frustrated and mumbling in Italian about the Azeri or Kazakh border guards. Pete and Mark are always picking out the positives and keeping us all laughing - even though Mark probably has one of the tighter schedules because he has a wedding to get back to. With all the waiting and run arounds from the mind-boggling beauracracy, we still managed to have a heck of a week together before the Italians split off on the motor bikes for Tajikistan and the pamir pass.

After lots of haggling and late-night talks with Azeri border guards in a small ferry ticket shack, we went from thinking all 8 of us and our four vehicles could ride the ferry across the caspian sea to aktau, Kazakhstan to being told for no legitimate reason that only two people could go with all four vehicles while the rest if us would have to take a plane. Mystified, we persisted with the help of our new Kazakh Russian and English speaking friend ivan - later fittingly dubbed Ivan the great for his unbelievable help.

In the end, Ivan and we convinced the tired and angry border guard to let six if us in the ferry with all four vehicles. Stephen and Pete would fly from Baku to aktau - a one hour flight - the next day and meet us there after our 24-hour cargo ferry ride.

Finally at 2 am Ivan and his fancy car and we with our two bikes, fiat, and ambulance boarded the ferry. We sat in the port until 7 am when we finally set sail. Til then we sat as a happy group on the ship’s deck, drank a bottle if johnnie walker whiskey, and watched the sunrise, and despite not having yet moved an inch on the boat, we breathed a sigh of relief and accomplishment - feeling like we were finally going somewhere after four days in Baku.

We arrived at the port in aktau, Kazakhstan at 7 am to a beautiful sunrise and no customs officers. We were originally told we would be able to leave the boat and go in to the city but would have to leave the cars on the ferry since it was a saturday and the necessary vehicle customs officers were not there. We thought we would lose another two full days of driving sitting around aktau. Nine hours later -after arguing and sitting in the hot sun - we were off and driving in Kazakhstan.